I wonder why transparency doesn't work with gradient maps to get very complicated effects. See thread here: http://forums.adobe.com/message/45434...
There are no easy ways to get something like this, using transparency gives always solid colors: 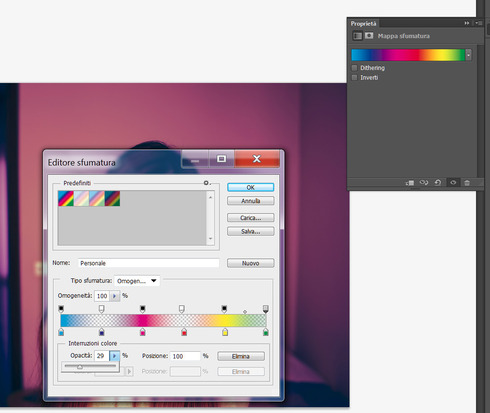 Right now, opacity settings in gradient maps appear to have no effect whatsoever. This is misleading - because, hey, why can we set opacity in a gradient if it doesn't do anything? But more importantly, if it worked, it would rock. By 'work', I mean if the opacity of the gradient was interpreted as a sort of smart layer mask for the application of the gradient itself.

As a basic test, create the following layers, top to bottom:

What I see: the entire picture goes red

What I want to see: the squiggles go red, the white shows through.

This reply was created from a merged topic originally titled
Opacity in Gradient Maps.
8 years ago

Or at the very least, get rid of the misleading, do-nothing controls.
2 years ago

Gradient Maps are essentially a different interface for Curves/Arbitrary Maps.

In older photoshop versions before the Gradient Map Adjustment layer was added one could save out gradients as AMP files which then could opened in the curves dialog to get the Gradient Map effect.
(Edited)