PRE10 can no longer open a project created in PRE9 and edited and rendered in PRE10, giving this error:

PRE has encountered an error.
[d:\pre\mediacore\mediafoundation\api\inc\Keyframe\Keyframe.h-142]

If you click on "Continue" (the only option), it comes up with "The project could not be loaded, it may be damaged or contain outdated elements."

1. The first error is one BIG FAIL, for there is no such folder on my drive and should not be hard-coded into an application to begin with.

2. If the project is damaged, why not tell me WHERE exactly it may be damaged or WHICH are the outdated elements. If I look at the XML source, it looks just fine.

3. What NOW other than recreating the project? PRE9 cannot open it either, so something's f***ed. 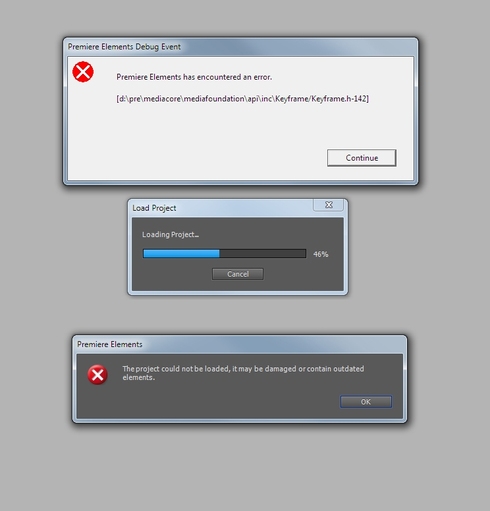 over to Adobe to get back to users

Jean from France
8 years ago

I have the same problem, but with files created i PRE 10. The topic is marked at solved, but its not solved.

I just checked for download for an update, but there is not any for PRE10

Edvard for Norway
8 years ago

I have the same problem as Jean and Edvard. It's very strange that ADOPE don't solve the problem in an update to PRE-10. Very strange.

Kim from Copenhagen
8 years ago

I found a relativly easy way of figuring out the odd numbers Rainer talked about in his post. My solution:

1) I made a copy of the perl file and change the filtype to .txt

2) Opend this file in Excel

I saved my project, but it is stupide that this error occure and Adobe has not mad a fix for it. If my memory is not wrong the exact same problem occured in an earlyer version of Premier 5-6 years ago.
8 years ago

For those of you that don't want to experiment with your project files, there is the web page that I mentioned above. Then you just upload your project file and immediately get the file sent back to you. Just Save as... and open the project. Due to the corruption made by Premiere in the first place you might need to check your audio fades throughout the project.

My file is to big for that solution - unfortunalety, more than 20 Mb
8 years ago

I tryed that solution, did not work for me. I dont know way. I did not study the output file.
8 years ago

Hi,
opened a new thread as this is tagged solved, which the issue definitely isn't.
Henrik
7 years ago

this sucks. It's over a year now and still no user-friendly solution! Does Adobe really expect people to work with pearl in order to use their product?
Every freeware software has better support than this product.
I am soo disappointed. And frustrated obviously.
Would be happy about some feedback from Adobe what they plan to do.
Do I really have to go into pearl?
6 years ago

This reply was created from a merged topic originally titled
The "Premiere Elements has encountered an error. D:\pre-\mediafoundation\api\inc\Keyframe/Keyframe.h-142" do still exist in Adobe Premie.

The "bug Premiere Elements has encountered an error. D:\pre-\mediafoundation\api\inc\Keyframe/Keyframe.h-142" do still exist in Adobe Premiere v 10.

I have read different posts about it and can see that the provided bugfixes are from other sources but Adobe. Besides none of them seems to work 100%.

I wonder if there is any downloadable update or bugfix helping me before I get my project file corrupted again? I do not have that time....

Besides I find it strange - I see no comments from Adobe about the problem. It is a severe problem since auto saved files are corrupted too.

This reply was created from a merged topic originally titled
Keyframe.h-142 error in Premiere Elements 10.

Having worked for 50 hours on my Premiere Elements 10 project, I'm not able to open it anymore due to the Keyframe.h-142 error. I've already been talking to the support, but no solution could be archieved. Even the workaround with "perl" command prompt failed for me.
6 years ago

This reply was created from a merged topic originally titled
Premiere Elements 10 and regional settings, the Keyframe.h-142 error.

Hi,
ten days ago I bought PE10. I set off to work on a documentary that's about 2 h long. Then suddenly I couldn't open my project any more. I got:

It was easy to find others reporting the same issue, even a proposed solution was available. Only that didn't work. I managed to fix my project after hours of work, but am pretty sure this is an error to return, as the underlying issue is not fixed. So I am quite pissed off, frankly.

My findings:
PE 10 has a problem on Windows 7 with regional settings different from American English. In Germany we use the comma (,) as decimal seperator, not the dot (.). So for example 1/3 is written as 0,33333333, not 0.33333333. Unfortunately in the XML elements, the comma is used to seperate the eight fields for each keyframe. Works, as long as you use the dot as decimal seperator. But suddenly for some reason all dots got replaced by commas, some of the keyframes now seem to have have more then eight values, opening the project fails. Why that should happen after it worked fine for all saves before escapes me. Clearly a bug.

PLUS some extra edits not mentioned there:

Fortunately I am still on the initial 30 days. This is a serious bug that is sitting there unhandled now for quite a while. Also PE 10 crashes on my machine as soon as I try to use my second monitor. It is rather slow, too. Don't know, maybe I'll try the next version. But as this one apparently isn't going to be patched any more and I am not sure I'll get a free upgrade to the next one, I am going to return the product.

This might seem like bashing now, but I helped Adobe with detailed feedback during the Lightroom 4 disaster, I was patient then. Still think the new Lightroom is lacking performance. Now this. I wonder what happened to the quality at Adobe's. These guys ask for serious money, we can expect serious products, can't we? Yes, right, PE is not THAT expensive, but it ain't free either. A hundred Euros is not peanuts.

Adobe are obviously not going to solve this. They have closed this report and are now merging all new reports into it.

The only work-around I have found is to change the windows number format setting to "North America". This won't fixed already corrupt files, but it prevents new corruptions. Too bad adobe apparently think the USA is the only country in the world...
6 years ago

Thanks Allen!
I have thought about changing decimal separator to. I ́ll try that one at once.

Adobe!
I think it is a shame that the bug isn ́t solved and this simple solution wasn ́t/isn ́t communicated by Adobe themselves. Why is the thread marked as solved?

I have cried over Adobe Premiere Elements and different bugs for almost two years now starting with this one http://forums.adobe.com/message/4337330 To solve that bug I needed to buy a new laptop. My boss was pleased at all. .

And now It isn ́t as simple as "upgrade to next version" when working at an organization with 53 000 employers and and IT dept that have very hard to handle exceptions. Out of all our PC users I am the ONLY one running 64 bits Windows and Adobe Premiere Elements v 10. It took me one year for changing operating system, getting more memory and getting a functional Adobe Premiere. It is that hard at organisations with centralized IT department. Wake up ADOBE! This is reality.

But why did I bother? I still have huge problems with Adobe Premiere 10. Do I dare at all to work on my project?.

(Do not tell me to upgrade to Pro - I would never dare to ask my employer to invest that kind of money when bug handling is so terribly bad. )