Bridge CS6, running on OS Lion 10.7, shows incorrect meta-data! The aperture-data are shown like this: f2.0 instead of f2.8... f3.0 instead f3.5.. 5.0 instead f5.6 and so on. In CameraRaw, iPhoto etc. the datas are correct. Testet with two different cameras and jpg, tiff and raw-files. Has anybody else the same problem? Please check it out! I can`t belive that`s only a problem of my intallation!

BTW, if you want to check 'exposure' field in Camera Data Exif, please make sure this field is checked on in Preference->Metadata.
8 years ago

If you are checking the same field with me and see the wrong value, please kindly send me one of your file to chxyang@adobe.com.

Metadata in Bridge shows camera raw version 6.7 even though version 7.1 is installed. Lens serial number is either wrong or missing even when selected in preferences. Also f stop values are shown as 00. Hopefully an update will sort out these problems.
8 years ago

I've also got this problem in the german version of Bridge CS6 (64Bit), running on Windows 7.
In the top left area of the metadata-panel where aperture, exposure time, ISO-value, etc. are shown, the aperture value isn't displayed correctly.

Instead of f/5,6 (as displayed in several other programs) it shows f/5,0 and for every other value it shows also only the corresponding integer value and drops the rest.
(The problem is independent of the camera-model and occurs with images from Panasonic Lumix G1, Panasonic DMC-LX5, Minolta Dimage 7i, Nikon D5100 and many other models and also with RAW-, JPEG and TIFF-files)

The "maximum aperture" is displayed correctly.

At least 4 users of the german DSLR-Forum have also reported this problem: http://www.dslr-forum.de/showthread.p...
8 years ago

I have a similar issue, except here it's at least the 'Lens', 'Camera Body Serial Number', and 'Lens Specification' metadata fields on raw unedited JPG files. The Maximum Aperture, and the Shooting Aperture fields are rendered correctly.

Other workstations where I have earlier versions installed (CS4, CS5, CS5.1) do not have this problem with the same image file(s). But on the Win7 x64 workstation with CS6 installed, all versions of Bridge (CS4, CS5 ...) now exhibit the issue of missing Camera Data Lens etc. metadata present in the jpg files. (Bridge CS6 & CS5 appear to work correctly for the RAW version of the image file.)

It's readily seen in the File Info, Camera Data tab in addition to the usual Metadata panel for the Camera Data.

I have tried everything I can think of to get it to display correctly on this workstation. However nothing has solved the problem on this particular workstation. I don't know what causes it, because on another workstation with CS6 installed (both Photoshop and InDesign) do not have this problem. Only the workstation I have only CS6 InDesign installed, along with earlier versions of Photoshop is the problem. 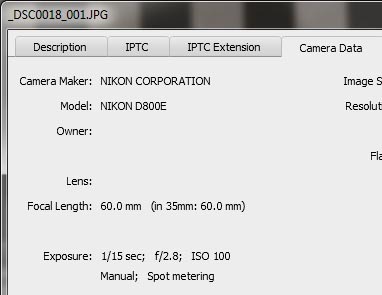 RAW files don't contain ICC profiles, so they are untagged, and that readout is correct.
8 years ago

Right. Since Nikon writes a 'ColorSpace' tag into their Maker Notes, their value is available only from the Metadata for the RAW file.

That image though is for the JPG file, and it clearly shows the 'Lens' tag information which is missing.

In trying to understand the trigger to the problem, I found that if I first use Bridge CS4 the metadata displays correctly. Once I have used Bridge CS6, I no longer see all the expected, and correct metadata.
8 years ago

After installing the update of PS and Bridge, the problem is gone. The aperture-values are displayed correctly.

Thanks for fixing the bug.
8 years ago

At first glance the updated version appears to be working, but it's not correct either.

And when I run Bridge CS5 after CS, one of the processors just chokes up. There are still too many issues with metadata display on my system. And now appears to have affected earlier versions when previously there were no issues with those.