Would it not make sense to correct (rectilinear) ultra-wide angle lens distortion, which is caused by looking at such picture on the computer screen or other device with a narrow angle of view by progressively cutting away (or interpolating) squares more frequently the wider the angle gets.

/further reading:
for the correct perspective one has to look at a picture with the same angle with which it was taken. From a 104 degree lens one would need to watch it by printing a big poster and watch it from a close distance - then the corners would not be stretched for the viewer - if looked from the center. Walk to the sides and watch at them straight on - they appear to be stretched.
So could it not be fixed for the computer screen - where pretty much everything is looked straight on - by cutting progressively away more material the more away from center one goes. As seen from the sample picture - it would change the ratio of it somewhat. 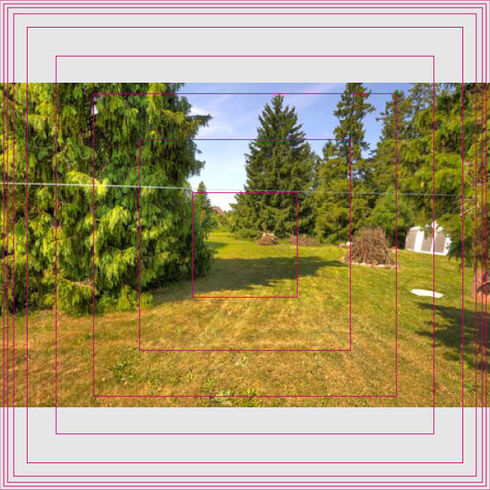 ACR and Lr currently perform rectilinear aspect-correct correction only. This is the only projection that renders straight lines (in the scene) as straight lines in the image, while preserving the correct aspect ratios.

It is true that these properties are no guarantee that your image will actually look visually pleasing. For example, you can reduce stretching / elongation at corners by introducing some barrel distortion (e.g., go to Manual section, and push Distortion slider to the left). This reduces the stretching at corners (for example, makes circular objects look more like circles, not ellipses -- good for human heads!). But it's not free: you give up the property that straight lines are rendered as straight lines.

DxO has an option of spherical (barrel distortion), but also cylindrical volume anamorphosis and the latter does reduce stretching so that straight lines remain straight (albeit circles will not become circles) and the aspect ratio changes.

Also for Fisheye ACR and Lr force aspect ratio, whereas DxO let's you use every pixel when desired. Although the sides and corners get very bad in this case, it is somewhat compensated by cylindrical volume anamorphosis as it interpolates the pixels back together, especially in these problem areas.

Having said all that, generally I like Lr much more over DxO for its speed and clarity.
9 years ago

Disclaimer: I haven't thought about this a whole lot.

But, in my experience, rectilinear distortion and/or volumetric anamorphosis corrections will sometimes yield a more pleasing picture, but often times will make it look worse.

--- Optional theoretical speculation... ---
I think it is impossible to properly correct a photo without a lot of *very* sophisticated intelligence in the algorithm, and even then it would be a compromise: The software would need to recognize objects and estimate their shape in order to do it "right"... - in other words, the software has a very hard time knowing what is foreground and what is background, yet for proper correction the software really needs to do just that: know how big and how far apart the various objects are in 3 dimensions - very hard to glean from just 2 dimensions. Or something like that / I may be wrong...
--------------------------------------------------

In any case, I've found that Photoshop's warping tools are often the best way to try and get the most important things shaped up the way you want...

What if your image has both straight lines and spheres? Do you want to preserve how edges look, or how faces look? The point folks are making here is that you have to make your choice, and all choices have consequences.

In the case of a general solution for a general problem, there is no right, only creative decisions.

This is similar in some ways to white balance. Even if we know what perfect studio white balance is, we can choose to go outside of that for creative purposes. And we have to accept that the real world is going to have a lot of mixed light and complicated neutral responses.
2012-01-08T02:26:01+00:00

No, Rob, the only "right" here is to take a circular fisheye image and project it onto the inside of a hemisphere (and then put the observer in the middle). That's why they do that in the IMAX domes.

Makes for a bit of an expensive monitor and print solution, however. But everything else is some sort of compromise.