The test image is 2 lower layers starting with a solid blue background, with a solid red layer on top (neither has any special settings).
The top two Layers are a fully transparent Layer within a Group Layer set to Normal. In the Layer Styles for this Group Layer the Fill Opacity is set to 0%, knockout is set to Deep and the Transparency Shapes Layer box is unchecked. Under these conditions I would have expected the image to be solid blue as the knockout should go to the background layer as it would if the transparent Layer was standalone and not contained in a Group Layer: 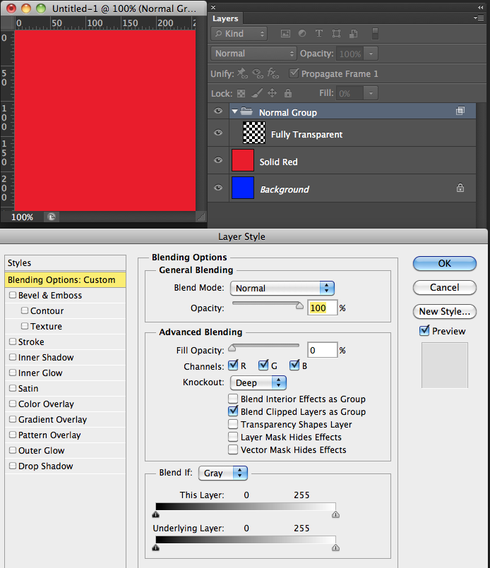 Selecting the full transparent Layer I use the pencil tool send to round (color is green yet you can use any color) and 100% hardness. I click in each of the LL and UR corners of the Transparent Layer. It shows up in Blue yet as square patches. I suspect the PS is identifying the Shape Boundaries for that Layer thought this behavior is strange since the Transparency Shapes Layer is turned off:
image would be appreciated. 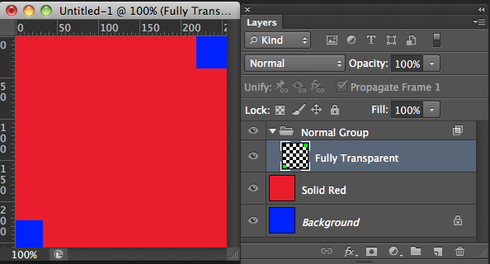 Now this next image is the same as above except that I turn off the visibility of the Group Layer. It turns solid red as expected: 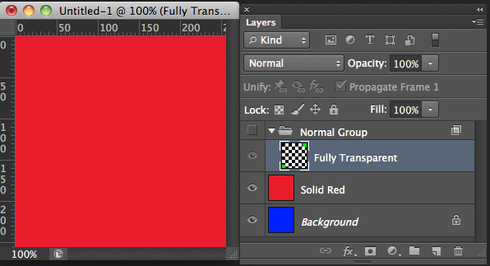 Now for the really strange part. All I did for this next image is turn the Group Layer visibility back on. Now it is totally Blue: 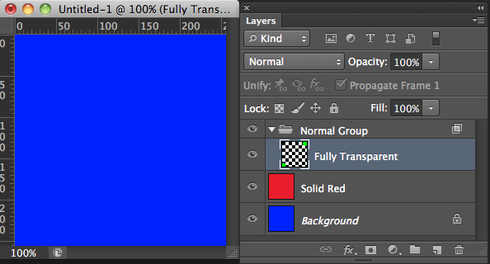 I believe the formation of the Layer Shape boundaries via transparency has some bug with the Transparency Shapes Layer option is turned off.

Yes, I'm getting the same result on Win7
8 years ago

I've been looking into this. It looks like some of this is as designed. From the developer who worked on group styles:

"The "design" is that a group style's shape only includes the shape of the group layers themselves, not anything beyond the group.
You can't have deep knockout and a group style."

I can get the effect where the transparent layer knocks out to the Background layer by setting the group styles the way you did and then turning off Transparency Shapes Layer on the Fully Transparent layer as well. I'm not sure if this does what you're trying to do or not.

As for the issue with the squares appearing when you paint on the Fully Transparent layer, I can reproduce it. I'll go ahead and log it in our bug database.
8 years ago

Hi Jeanne - Thanks for looking into the issue. However, between you, me, and the developer we are talking past each other a bit.

The primary issue is associated with having Transparency Shapes Layer turned off in a Group Layer. I believe there is an incorrect creation of the Group Shape under certain circumstances. I will put together example that has nothing to do with the Knockout setting and either post it here or send the PSD file to you directly.

Again, thanks for your attention to this issue and you will hear from me soon. Hope you enjoy the holiday.