I'm using the beta version of Photoshop version 13 and I've been getting apache errors a lot. I've done all my Adobe updates, but today, it went berserk. It gave me apache errors and it began opening hundreds and hundreds of new tabs in my browser and then started opening new windows all saying the same thing about an apache error. I had to shut down the pc to get it to go away, as the task manager wasn't fast enough to end all the new windows that kept popping up. After restarting the computer, and re-opening the program, the photos I was editing were found and brought back up, so nothing was lost. And it has worked since then. But I figured it best to report the issues.

Could you tell us *exactly* how you're getting Apache errors?
8 years ago

Apologies, as I don't know how it works. But basically I'll click on the color picker, and instead of bringing it up, it tries to open the help file in photoshop, which opens up the web browser and creates all the apache errors. Each tab that opens is the Adobe Photoshop Online help.

Actually, I just went in and it did it again. I got a screenshot, as thankfully it only opened one tab this time. 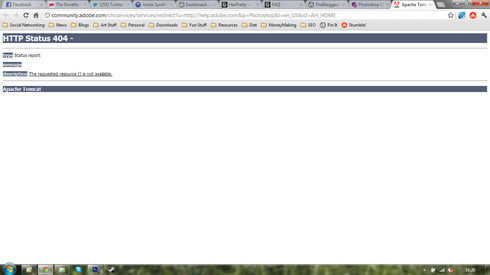 You're trying to access the help pages - which are not available yet, as stated in the release notes and on the download pages.
8 years ago

How is clicking on the color picker doing something outside of normal?

You know what? I am only reporting this because I said something about it on Twitter, and you guys contacted me and asked me to report it here. I'm feeling very stupid right now, as I thought the point of beta was to report any buggy issues, which this is. But I think I'll just leave it and go back to using free editing software. At least I don't have people being condescending to me when I am reporting the tiniest issue.
2012-05-02T16:08:04+00:00

I don't know - but something on your system is changing mouse clicks into requests for help. Again, we have seen some bugs in plugins do that, and some external "utilities" (ok, I have to admit that part is sarcastic, because they're external programs that really get in the way more than they help).

I'm curious as to what sort of external utilities or plugins are causing issues. As far as I'm aware, I don't have any installed, as this is a brand new laptop. Unless there is something in Chrome inherently at odds with PS?

I would think that if it was an external issue, it would happen every time I click on the color picker, but it only happens occasionally. And usually it reacts with one tab opening, whereas yesterday when I reported it, it was because it made my entire browser go insane and I had to force a shut down of the entire PC.

I'd like to know what issue it could be because I do a LOT of photo editing and have been using an OLLLLLD version of Photoshop for years and years, and I decided to trial this one so that I could see how useful it is before spending a small fortune. Right now, I feel that I should just stick with the free online programs.
2012-05-02T16:19:29+00:00

Ok, no plugins, and you don't know of any external apps/utilities that would do that. Then we'd have to work with you to troubleshoot the system and figure out what's causing it.

Other people aren't seeing this (though some did in CS5, and most were tracked to plugins or utilities). What you're seeing (opening help when clicking) definitely is not normal - but we just don't know what is different about your system to cause it.

I'm not particularly frantic about it, to be honest. If I'm the only one having this issue, I'll just accept the problem is something to do with my system. At least it's been reported just in case it happens to anyone else.