When painting with the adjustment brush with a exposure change along a high contrast boundary a halo is created. Eliminating this behavior, or a "halo cleanup" tool would be very helpful.

Here is an example:

Automask needs to perform better and it would be nice if it had something similar to tolerance and edge/feathering controls.
9 years ago

This is a use case that a U-point-like mask would handle perfectly and very quickly.

I'm not disagreeing with the FR (I voted for it), I'm just saying that more than one complementary masking technology could be part of the solution to this problem, especially if they could be used together to work on the same mask.
9 years ago

The local brush mask does not work well, in my opinion. Its very unwieldy, very time consuming to get quality results with in most circumstances - may require a lot of erasing, and re-painting...

More specifically, one of the problems with the brush mask is that the algorithm either selects a pixel to be part of the mask, or excludes it - there is no in-between, no "gray area". I mean brush feathering sort-of helps, but not much. Brush feathering attenuates the selection based on distance from brush edge, what's needed is "feathering" that attenuates the selection based on likeness to what's being selected in the local region.

The biggest problem with the brush mask, as I see it at the moment, and if I can describe it, is that the transition region between what's selected and what's not selected, is very harsh and "aliased", and speckled. If I dig too deep to try and eliminate haloing, I just end up with a harsh jagged selection that selects too much, instead of too little.

The only way I've been able to use the brush mask effectively, is to zoom way in, and use a very small brush with maximum feathering, then brush in a very painstaking fashion. Using this approach, I can create very nice edge transitions, but whew - what a lot of work! And, once I'm doing this, I can do it almost as fast, and almost as well, without the masking!

Perhaps what is needed in Lightroom, is not big fat U-point like controls, for auto-selection, like in Nx2/Nik software, but smarter U-point-like brush masking - include the stuff that's like what I'm brushing on, but make a smooth transition between selected and unselected regions. Maybe instead of brush edge feathering, the feathering control should determine selection transition "feathering", when automask is enabled - i.e. how gradually/smoothly to bleed the mask into the unselected region, instead of how much to gradually attenuate the selection based on distance from brush edge - the latter should be a don't care in the case of auto-masked brushing.

Then, if one could control which parameters determine likeness (is it texture? hue? luminosity?, ..., i.e. what is it that's determining what should be selected and what shouldn't as you brush?...), we'd really be having things... - I mean maybe this latter part isn't even necessary. Certainly U-points have gotten by without it, relying on anti-control points to help train it what not to select. Perhaps if the masking eraser brush had the same smarts as the paint brush, that would be enough - dunno.
9 years ago

Yep, count me in.

Funny thing i added a request thats kinda related to the difficult task of getting those edges filled in appropriately.

Yes agreed. If the automask just had a variable feather it would help. At the moment it is so bad that I gave up using it.

settings for Auto Mask like the ones in Refine Mask in Photoshop would be very helpful - smooth, feather, contrast and edge shift.
8 years ago

I use auto mask almost very day for product photography. It works well in general, when there is enough contrast... But it really needs to be improved to be inpar with the rest of PS tools.

It would be awesome if it had some configuration options for threshold and such.
8 years ago

I believe I have reported this before, several years ago, but I could not find the post. The issue is that when painting with the adjustment brush with auto mask enabled, it does not fill in the effect right up to a hard boundary, leaving ugly halos.

Here is an example, where I painted in a bright color to illustrate the effect on tree branches. I also filled in the area with a color using Nik Color Efex Pro to show that it can be done properly. 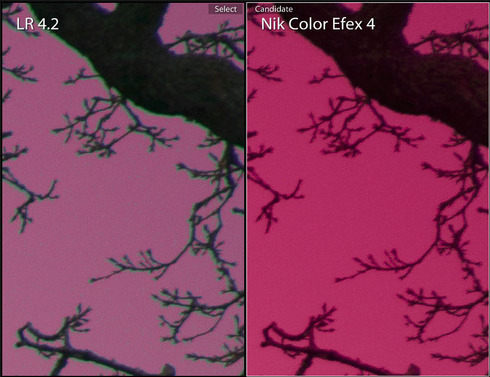 Given the effort to fix the fringe issues from CA and fringing, it sure would be nice if this could also get fixed soon.

Sure would like to see this addressed sometime soon...