The brushes in camera raw are gone

They disappeared the adjustment brushes I had used in camera raw on a photo treated as an advanced object. I happened 2 times on 2 different photos in a few days.

I try to explain it better. I work with the photo treated as an advanced object. In Camera Raw I made several adjustments with different brushes. I do OK and I continue using the adjustment layers. Indent several times in camera raw to correct or add brushes. At some point the selection circles are no longer there (they are not even hidden), I can no longer intervene on the adjustments I had made. However, the adjustments are maintained as long as I do not make other corrections with new brushes.
Sorry but I'm using an English translator :-)

I understand that there's a language barrier here. So I'm guessing that what you're talking about is you are doing what we call local adjustments with the adjustment brush. I'm not sure if you're talking about the Camera Raw Filter in Photoshop, or Camera Raw proper, the standalone. It sounds like you might be using the filter??? because you're entering it often to correct or add new local adjustments? Either that or you're returning to Local Adjustments often in one session while in the standalone full Camera Raw?

And your brush cursor is simply disappearing on you. Is that right? Are you using a Wacom? Brush cursor problems come and go with them often enough.

Have you tried hovering outside of Camera Raw (and Photoshop, if in the filter) over something else, such as the dock or toolbar, to see if the cursor comes back. That sometimes brings back the cursor, if that's all that's going wrong here.

Are you able to save the file (if in PS) or click Done in Camera Raw, and then return and be able to edit the file again, with your cursor visible and intact?

You haven't said what version of PS/Camera Raw you're using, or what OS you're running. That information could help someone figure this out.

First of all thanks for the availability.
I try to synthesize even more hoping to make better understand the problem.
Windows 10 Operating system
Plan Photography in Adobe Cloud with all updated to the latest versions
The steps are these:
-I open the photo as an advanced object
-Opens camera RAW
-I make general and local fixes with brushes
-I do Ok
-I keep working on the photo with fill levels, I create sharpness, mask etc...
-I enter again into Camera RAW by clicking on the advanced object because I want to try to change a value or I notice that I have to correct something.
-So several times
-At some point I enter the Camera RAW..... always clicking on the object Advanced and.... there are no brushes (the circles) but the adjustments made are left.
-If I create another brush and click Ok..... Old settings disappear
-If I click on OK without modifying anything the old settings disappear
-Knows I do cancel everything remains unchanged
If you save the picture in PSD does not change the situation.
I also tried to open the same photo from an old PC with the same versions of PS but... nothing
I use the mouse, no Wacom
It gives me the idea of a bug in the program/update.
I hope it solves with a future update otherwise I will have, at each step, check if the brushes are there yet, saving more often in PSD

Ahhhh. "Advanced Object" = "Smart Object" in English. And since this is a Smart Object, you're using the Camera Raw Filter from inside Photoshop, not the standalone.

<<If you save the picture in PSD does not change the situation.>>
I wouldn't expect the PSD could rescue this since it seems it's the Camera Raw instructions that are becoming corrupt somehow.

And now I'm perplexed as to what might be causing this. You can't find either an active or inactive marker that shows where you started a new edit when you select the Brush? Just Brushes, or does this also include any gradient adjustments?

It gives me the idea, too, that there's a bug in the Camera Raw filter. The file appears to be becoming corrupt at some point. This is always after several re-entries and edits? If you start a new "fresh" file, everything works for awhile, but eventually stops as you described it?

And most unfortunately, our Adobe staff are on vacation all this week and through next weekend.  Continuing as you've been doing—cancelling and finding another way to make the necessary adjustments — seems to be the only option for the moment, unless someone else here has heard of this and knows the solution. It hasn't happened to me, but I don't often re-edit in CR more than a couple of times.

If you  haven't heard from anyone over the next week, write something here, to put this back up top while waiting for someone on the staff to check it. They're pretty good about doing that.

And definitely save a file or two that has stopped showing you the brush markers—files you can share with Adobe, because that is likely the fastest way they'll have to find the problem.

Out of 6 photos I've worked with smart 2 objects have had this problem.
I didn't understand what triggers the problem.
If I no longer intervene inside Camera RAW (with double-click on Smart Object) the adjustments made before the disappearance remain.
I can still use filters, masks, fill levels, I can even use the camera raw filter.
But I can not crop the image (both in the camera raw and outside), if I do I lose all the adjustments.
So Camera Raw and cropping I can't use them anymore.
In the next photos that elaborate I try to check the brushes in camera Raw at each step to understand the point of.... disappeared.
I do not know if I can send you the photo as it is part of a Workshop and we have been imposed the restrictions of publication.
I will hear with the teacher.
Thanks

Davide,
I'm sorry but I have to admit that I don't understand your 'Google Translate English' very well. Is it possible to describe what you are doing in very short and very simple words? Perhaps that translates better.

After the brushes are gone:
-Any processing carried out inside Camera Raw (double-click on Advanced object) Eliminate the local adjustments of brushes
-Clippings, in or out of Camera Raw, eliminate local brush adjustments
-Brushes remain if I use masks or adjustment layers

can you do a screen recording of the problem? 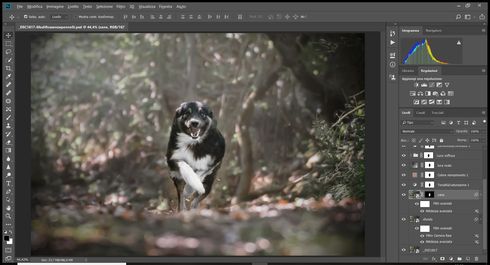 Photo over.
Local settings are retained but brushes are gone 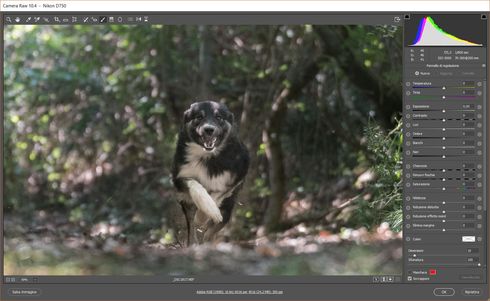 Inside Camera Raw.
The brushes are not there and the adjustments are missing.
If I click Cancel you see the picture in the above post (dog with white hair)

Thanks, i think i know what's happening.

When you duplicate a raw smart object, you have to use New Smart Object Via Copy.

If you don't, then each time you change one layer, all the others change too. 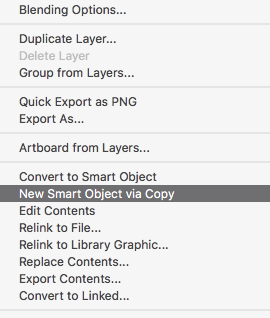 I used CTRL-J to copy the Advanced Object 2 times, isn't it the same?

No. If you do that, all the Objects are linked, not independent.

Ctrl-J is the same as Duplicate Layer.

At the next photo I'll try to do as you say.
In fact, I'll try to make two versions, one as I always did and one as you say :-)
Thank you