Recently I just did an update of Photoshop to V22.3.1

After I launched PS, and then go to the performance dialog box, then noticed that it can't detect my GPU GTX1050i.

This was working fine with the previous version of PS. I suspect that the latest update had something to with this problem.

AMD 5500XT 8gb here, same problem. So it's not just AMD related but Nvidia as well.

Also had this problem in the past 22.3 version. Rolling back to 22.2 is the last working, GPU Accel friendly version.

Yeah, so a driver compatibility issue is an unlikely scenario here since it's affecting GPUs from both makers.

Same issue here with the GTX 1050 Ti.
Reverting back to 22.3 or earlier is the only way to get it working for now.

Hi All It's not the update it's either your Windows, bios or card driver, I have a lowly GTX 980t and mine works fine, I have latest drivers, windows 10 home 64 updates and my bios is up to date and I'm running photoshop v22.3.1.....

I have one bit more of advice goto devices on windows update your video card from there just to check windows and Nvidia are in sync ....

@Lawrence Robson It's good news that version 22.3.1 works fine for you. I can't speak for the many other users who reported the same issue on widely varying systems, but I can confidently say that I keep everything on my computer up to date: Windows, BIOS, GPU drivers, etc. I had it all that way prior to updating to the latest Photoshop version, which unfortunately didn't run properly, and the reason for that is still unclear. While your assumption that it might be a hardware/compatibility issue is open to discussion, but it isn't necessarily the right answer. We still need Adobe to investigate this problem, if they aren't already working on it.

I can confirm that this bug (starting from 22.3 for AMD users) has absolutely nothing to do with BIOSes, updates, Windows, etc.

I have the latest of all and still does not work. PS version 22.2 does. So, Adobe messed up something starting from 22.3 and still didn't address the problem.

I suspect some thing went wrong with the latest PS version.

For testing purpose I manually delete PS settings folder which is located under C:\Users\<username>\AppData\Roaming\Adobe\Adobe Photoshop 2021, and than PS started working fine with GPU detected, however when i closed PS and reopened it, PS did not detect GPU.

Yes I had exactly this too.

Interesting is that Illustrator also uses GPU and have no issue with yesterday's update.

That worked, thanks for the help. Hopefully PS fix this bug in a new update because this isnt an old GPU

@GBussey I have the same AMD Raedon RX5700 XT and it is frustrating!!

Hi everybody, same problem here - but I've not idea how I can go back to former version.... Got a lot of customer orders and I've to work with ugly PS update in slowmotion - It's a nightmare!!

@Traumfaenger yes, it's kind of sad that a high profile, professsional product like PS has this kind of QA problems for W10.

@Traumfaenger under creative cloud go under all apps, than locate Photoshop and click on 3 dots and chose other versions, for easyer understandment are images below. 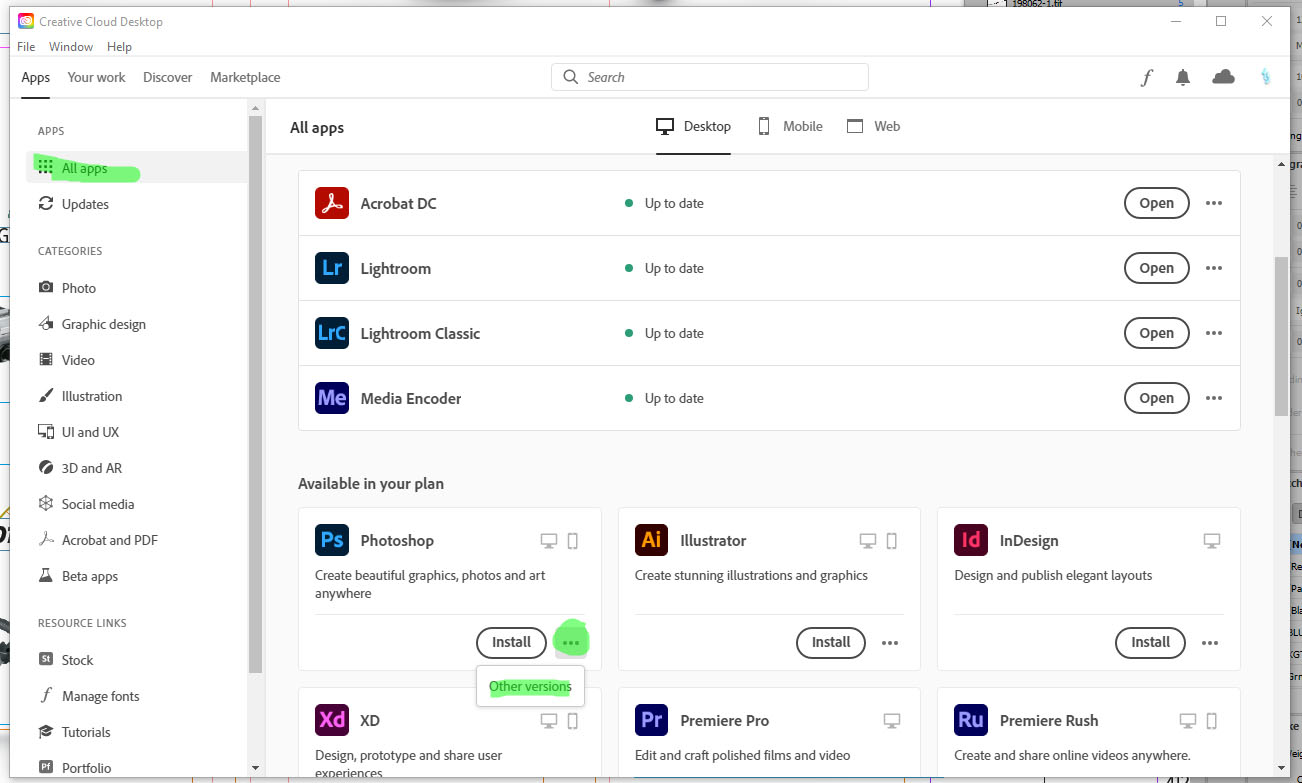 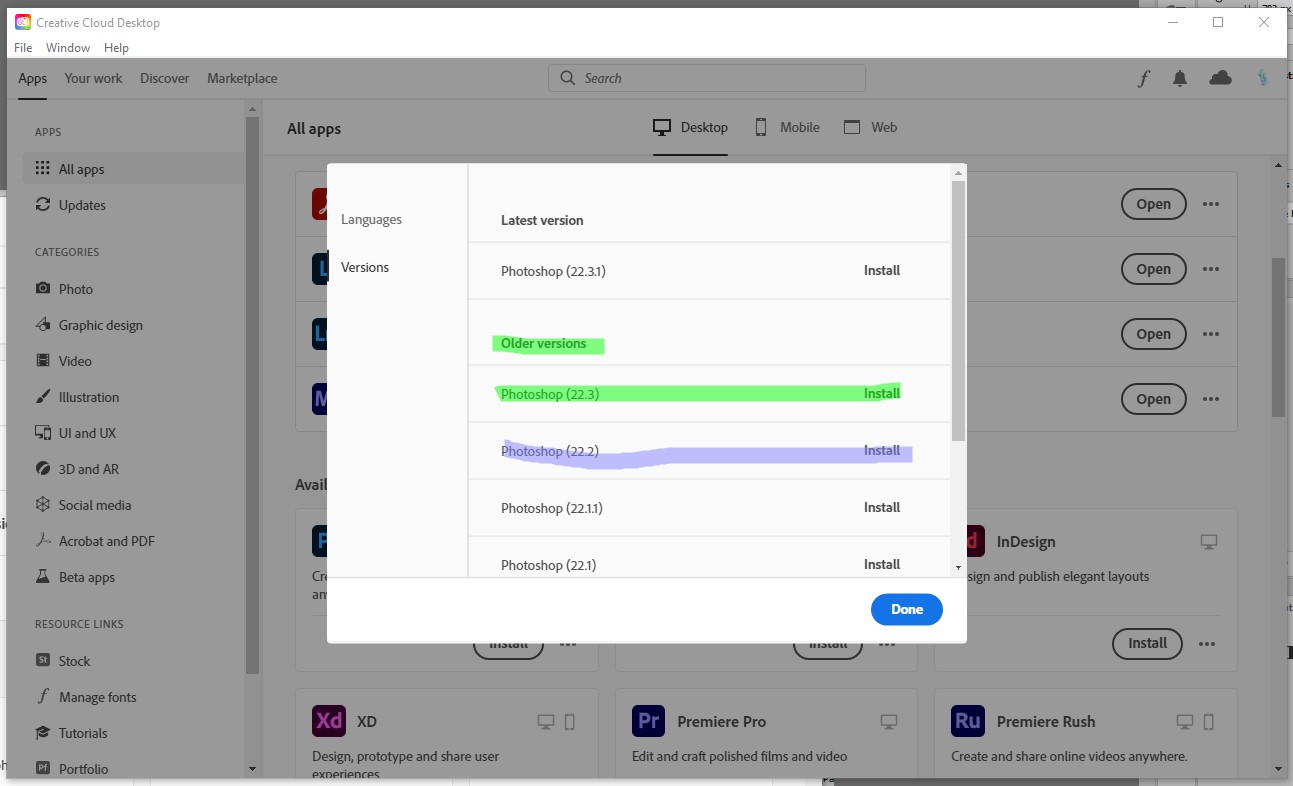 I tried this but I am not able to choose an older version !!??

In Creative Cloud Desktop program, go to "File>Preferences" and than under "Apps" scroll down to "Settings" and switch on "Show older Apps" 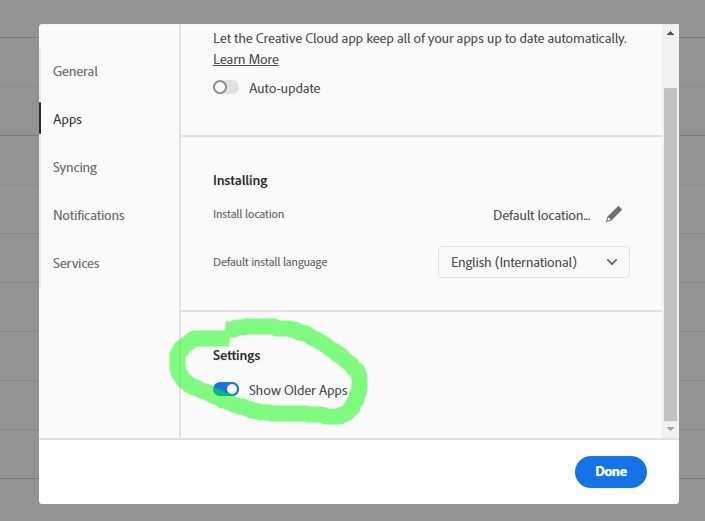 Thanks everybody.... try it after my current work will be saved....!!

I'm also having this problem with NVIDIA Geforce MX250. Spent a couple of hours trying to sort it last night, then another couple of hours this morning. As far as I know I have the latest graphics driver version installed but every step seems so complicated for someone who isn't a PC tech, just a lowly photographer! I've followed advice above and reinstalling previous version of PS 22.3. Fingers crossed...

Yes! Scrubby zoom is back! At least for now...Have closed and reopened PS twice and seems OK. What a waste of time though :(

I have a 1080Ti and AS SOON as I updated to the latest version of Photoshop (version 22.3.1), I noticed that my graphics card was detected but they REMOVED some of the options that used to be there in "Advanced".

I know it sounds silly, but have you tried restarting Photoshop and see what happens? The latest update seems to behave very inconsistently. It appears to work (partially or fully) for some users at first, and then either works or breaks after restarting PS and/or the computer.

Same issue on my Microsoft Surface Book with Nvidia GeForce GTX1060. Rolling back to earlier versions did NOT help. Have tried every version available to me, and also checked out all the troubleshooting steps I could on Adobe Help with no change to my predicament.

Haven't been able to edit photos for weeks and have to say, I'm not happy.

same for me. Have you solved it?

Got my new notebook today and have the same issue with a core-i7 and a GeForce RTX3060. I'm downloading the older PS version now...

Oh! Sorry to hear you’re facing this too. I had doubts that perhaps the issue only affects older GPUs like mine, but now with someone reporting the same thing on RTX3060 means it’s just a software bug. Let’shope Adobe comes with a fix very soon!

I'm really glad that it's just a software bug, cause I had a lot of doubts if my decision for this notebook was the right one.
I was very good in hardware questions around 10 years ago. But now I feel very old and I was shocked how fast hardware had grown! XD e.g. : a SSD with 700mb/s was fast for me. And then I saw the new ones with 3500 mb/s. XD

But I think I did the right choice for drawing, photoediting and a little gaming. :)

I’m not an expert but I guess RTX 3000 series is perhaps the most capable line of GPUs in the market right now, you should be able to do a lot more with it than just some photo editing or light gaming. It’s Adobe’s fault, don’t doubt your GPU :D

Can you check what's you language set to ?

Hi Sandra, does it work after installing the older version of PS?

AMD Radeon RX6800 has the same problem. I hope a new update will resolve it.

I hope Adobe PS is working on these problems as reported here!