I often use the quick export or the export as.. feature. Unfortunatly, the exported image has a different size (in pixels) than the original picture. Thats not only a different scale, but also a wrong canvas.
The results can vary even in one file when toggling different layers (randomly)

I have Windows 10 and the recent CC version installed.

Please let me know if you need more informations.

This issue should be fixed in the latest release of Photoshop CC: https://blogs.adobe.com/photoshop/2017/10/get-the-goods-announcing-updates-to-photoshop-cc-dimension...

I am using photobooth app, which is expecting exact image size, otherwise image/graphic is cropped and I was wondering, why is cropped, if I am exporting "right" size with command "export quickly as PNG" (where I do not see exported size in pixel) and I was really not expecting Photoshop is buggy and changing aspect ratio of image).

Sorry for the frustration Housik. Thank you for the report. You are correct that this is still an issue. There was a misunderstanding on a couple of similar issues, one of which was resolved. This issue is still under investigation. There will be an update when it is ready.

I'll look into workarounds and get back with you.

Has there been any headway regarding this issue? It's something I still experience. (18 March '21, Photoshop v 22.3)

Is it a transparent background? I think quick export and export-as to an automatic trim on transparent pixels unless you place a mask on the layer/group you are exporting.

If it's not what Max suggests, can you post a PSD and steps that are giving you unexpected results?

Hi Max, its not a transparent background.

Jeffrey, the specific PSD file where I can reproduce the misbehaviour has a size about 1.5 GB, but I try to create a sample file. I come back to you, soon.

Okay, I created a file where I can reproduce the behaviour: the big file has 7016x9933 pixels and contains a simple colored layer and an image layer bigger than the canvas. This specific file only exports to a 5219x8735 file. When making the image layer invisible or cropping it to the size of the canvas, the export is correct.

I can reproduce the error on a Mac machine, too.

Please, have a look at the file here:
https://we.tl/lJEKVybf0q

@Jeffrey, could you reproduce the problem with my sample file?

Sorry, the file wasn't available to download. Can you repost it?

Thanks for the sample file.  It looks like the problem is caused by the layer that extends beyond the canvas bounds.  If you mask or crop that layer to the canvas bounds, it exports correctly.  Give that a try and let me know if that workaround succeeds for you.

Indeed, I tried to crop all layers and it worked fine, but that should really not be necessary. So I consider it a bug in PS.

Glad the workaround worked for you.  Yes this is a bug and we're working on a fix.  Thank you for reporting this.

If you don't want to crop, masking like Chad recommended is a non-destructive workaround... Select-All then add an alpha mask to the layer.

If you have multi-layered folders within folders the maksing method might not work for you. Somehow the following steps helped me:

I do not know why but this solved the problem for me. 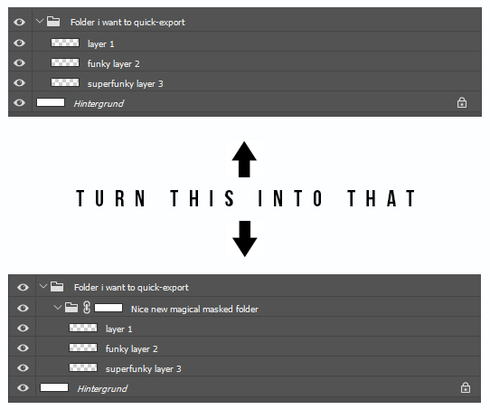 Using the Export As command with some of my files, the image area gets cropped. The amount of the cropping is consistent whenever exporting the same file (with the same layers on), but varies between files. It appears to be related to the size of a layer that extends outside the image area.

Using the legacy Save for Web, this problem doesn't happen.

In Adobe PS (19 Release) I still have this error
Saved image is bigger (in height) than the canvas.

I confirm your words, still not fixed.

Since updating to Photoshop 2018, I find that when trying to save a picture using "Export as", after entering the image dimensions, it will change 1 by 1 pixel and give a message:

"The image dimensions cannot scale exactly as entered and have been rounded. For an exact size, please use Canvas Size or scale the layer and layer effects in the document"

This worked fine in Photoshop 2017. I don't know what you're trying to accomplish here, but this is a massive anti-feature.

Using Canvas Size doesn't scale my image, it adds a white line to one side.

What's worse is the message is unclear, and there are mathematical errors with the scaling in certain situations.

Trying to change the percent, I realize, it's correct when I enter "18.14", but once I add the % sign, or hit enter, change focus, etc., and Photoshop adds the percent sign, it misscalculates.

As a web designer, this is a major part of my image workflow.

Sorry for the frustration. Thanks for the detailed report - that's helpful. This is a known issue and it is under investigation. I'll look into possible workarounds in the meanwhile and get back with you.