Photoshop: Open as Smart Object - File is opened but is stretched and the canvas size is incorrect

I am having an issue with the "Import as Smart Object menu item in Photoshop CC.


1) Open Photoshop and go to; File > Open as Smart Object... The open file dialogue pops up and I select any readable file (Illustrator file/PDF)


We have a lot of types of imagery we work with on a day to day basis and not being able to open files as Smart objects consistently is a huge issue. What is the status of this bug?

Hi, Thanks for the file and extra detail on the steps. I'm able to reproduce this issue and have logged it for investigation.

Does opening the file directly and then converting the layer to a Smart Object work for your purposes, until we can sort this out on our side?

I can replicate that here with CC2018 and Windows 10. Opening an ai.file as smart object appears to take on the aspect ratio and size from the last opened ai. file not the current one.   Not using a smart object (i.e. just file open) opens correctly

Can you us point to files that exhibit the problem? I just tried with simple .ai file saved from Illustrator v.22 and don't see the reported issue. I'm using Win 10 Fall Creators Update (1709).

Below is a link to a document (but seems irrelevant now looking at the information below).
I've found out a little more info...

If you don't have any previous files open when the Import PDF dialogue has appeared, error may not be visible.

Not sure if it happens on other formats etc...

Yes, as I posted previously - with a single file you may not see it, but try opening a series of ai files with different aspect ratio, each time using "Open as smart object". As Ed also found, each document takes it's aspect ratio from the last.

Thanks for the message.

This does not work for what I require as I need the artboard from illustrator to match the canvas size in photoshop with the image remaining as a smart object., but CS6 can do it. So I can use that (until it becomes obsolete!!)

I have just checked this on CC 2014 and the issue exists there too. Although it appears in a slightly different way. The file opened as a smart object does not distort, but it takes the HEIGHT from the previous job you imported and makes the Smart Object file that height.

For example if you select "Crop Box"
see below: 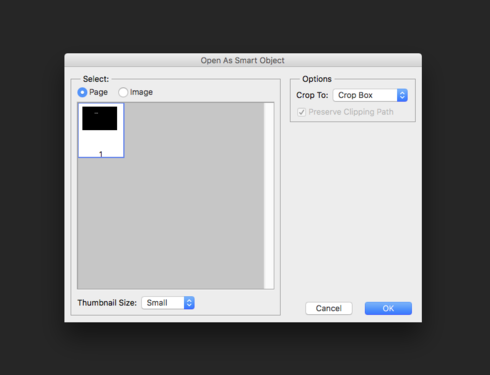 finish creating your action, close photoshop, open it again, and run a batch action on some files in a folder. it defaults to "bounding box".

This happens on all versions of photoshop. It used to be fine on an older version of CS6 but now it is impossible to create an action using Open as Smart Object and for it remember the "Crop To" setting.

Thanks for the help.

Hi all. Opening a PDF as a Smart Object takes on the canvas size of the previously opened file is still happening in CC 10.1.4. So I assume there is no solution yet. Correct?

Still getting this issue in CC2018, etc (as before). Is this likely to be investigated soon?