I have a 218 MB PSD file that is causing me major headaches. Any time I start up the file, dragging a single layer goes at about 2 frames per second. However, if I delete one layer or simply cut and paste a layer, the lag is fixed.

Saving and returning to the doc causes it to lag again.

Anyone know what's going on? 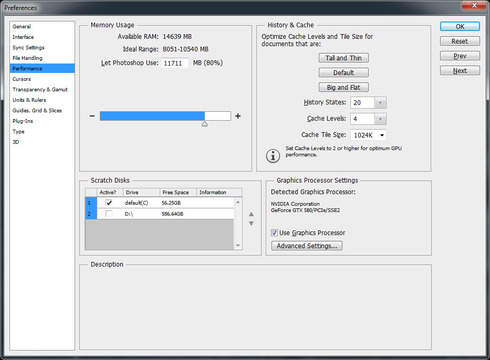 This should be fixed in Photoshop CC 2015 update.

What OS version are you using?
Have you updated your video card driver from the GPU maker's website?

OK, the layers + comps are probably what is slowing it down.
Try removing all the comps and see if it speeds up.

That helped as well. I deleted each layer comp one-by-one and once I was down to 2 layer comps the lag was gone.

I hope this isn't the solution though as using those layer comps are crucial to my workflow.

Yeah, but it tells us that the problem is something we already know about.

The combination of a lot of layers and many layer comps is going to be slow whenever you do something that has to update the layer comps (like moving layers).

Got it. So then it is a known issue in Photoshop CC?

These are the options on each of those layer comps (only updating visibility):

Yes, the logic still has to walk through the layer comps, and layers, which is what takes time.
We've been discussing ways to make it faster - but it'll take time to implement and a lot of time to test.

If it's only a problem with the amount of layers & comps, why would deleting just one layer fix the lag issue? If it would help, I can upload my PSD to help debug this issue?

I appreciate your help on this Chris. Thanks for the quick replies!

Again, it sounds exactly like an issue we already know about and are working on. I don't think we need the document.

This has been an issue that has lingered since october at least from what I saw in another support post. I have built my photoshop document around using layer comps and now I can't even work with the document because the lag is so severe. I have a brand new iMac with 24gb of ram – so my machine is not the issue.

I am very frustrated – especially since there hasn't been an update and this is a known issue.

Photoshop is the go to for designing for the web, but if you guys keep this up I can see people trying to migrate to sketch. It's certainly something I am going to consider – you guys have had many improvements, but bugs and poor software development make them unusable.

Is this update coming??

That is what I'm referencing. I have this problem on my work computer and It makes me look bad – slow.

If I delete all the layer comps I've made then the issue seems to resolve.

The document is only 185mb.

In past versions of photoshop I have worked with 750mb plus without any lag.

In all the example files we have been given (which was quite a few), this is fixed in Photoshop CC 2015. The underlying routine that was consuming time while dragging or nudging was made to run far less often, and at more appropriate times.

If you have examples that are still slow in Photoshop CC 2015 (with rulers off - we're still working on that one), then we need to see those example files so we can figure out what else might be going wrong for your specific file.

I know this because I just updated last night and my workflow is crippled because of this super annoying bug. I have 61 layer comps and my brand new macbook with 16GB is crawling when trying to nudge layers around. Usually my Shift arrow commands to nudge layers by 10px doesn't work with this bug. Because of the slowness it nudges the big 1pixels if I say move 10. Really? I have 61 layer comps, and the PSD is 600 MB. File dimensions 1920x720. Over 100 layers across multiple folders, etc.

Why is this still not fixed? I cannot work like this. I cannot manage having 61 separate PSDs for minor variations and that is why layer comps can be so powerful.

LOL, I deleted the one layer as someone mentioned above and now I can move things around as expected. Wow... this needs to be fixed. Guess I need to keep a bunch of trash layers around just to delete them when there is an issue.

I cannot send my PSD due to confidential project work, but this is a major bug. Should be P1 by any stretch of the imagination.