Photoshop could use a interactive Mirror Paint and Seamless edge/border painting function. Painter has had this feature for about 10 years now.

Hello!
The closest thing to mirror paint is the following option in the clone source panel:
set the W: value to -100%

except this has nothing to do with what we are talking about, and not what we are asking for. :P

Right. That means PS still doesn't have that funtionality after all these years. Same with a seamless time paint feature. People are still
Using the offset filter. Archaic. These are 2 very simple concepts that many users would be very happy to see. And say "finally!" ;)

Another idea I've been waiting for that is similar to some of the other ideas below (but I didn't see it explicitly stated) is kind of a duel purpose option. Someone may have said it but it's worth restating I think. There should be a simple setting to chose that allows to set the entire document to "wrap around mode" which would allow you to both move an object past the edge and it comes out on the other side and/or corners (perfect for tiling) and also works for drawing tools like the brush, pencil, paths etc. That would be an extremely simple solution for making custom tiled images. Likewise being able to set a pattern overlay should have a simple button that sets it to match up at edges evenly, and it would lock the scale settings to preset intervals that would only include scales where they would match up at the edges.

I've been designing fabric prints for a client and I'm getting really tired of having to rely on multiple layers and guides to force this effect.

I do also love the idea of a mirrored drawing option, or at least one that actually works in real time other than the object oriented "work around" that's floating around online. It isn't very often that I need a perfectly symmetrical drawing but I would still consider it as being a necessary option for the kind of programs adobe is offering.

I have an idea for a feature for Photoshop.

Photoshop is the goto program for creating Computer game textures.
One thing that done daily is creating tillable textures,

This often means flipping back and forth with the offset filter,
sorting out the seam with the clone stamp, copying bits of the image about and painting sections.

This back and forth is quite time consuming but its something we all have to deal with.

The idea is having an option to make a layer repeat over the edges of the document, so when you paint / draw something over the edge on that layer, it would appear on the other side too.

You could also move layers over the edge and they'd duplicate over the other side for when you copy parts of an images about.

Heres a mock-up of the idea, You can see the edgeless button at the top of the layers panel. the reason i've suggested it just being something that works on a per layer basis is to not crash Photoshop with heavy documents. 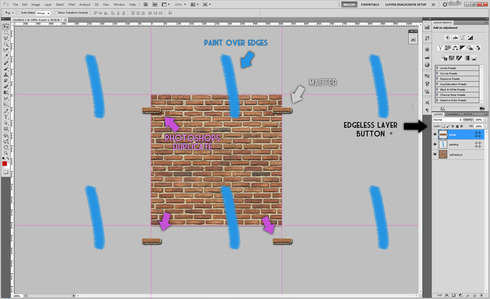 Lots of games company's have licenses for Photoshop and this is something that could save them lot of hours!

Its an idea I posted over at Polycount and straight away people wanted it, the demand is there its just getting the idea out to people.

Here's another picture of it when you make the base brick layer edgeless, this is where you could be cloning and sorting seams, i posted the other picture as this ones a bit hard on the eyes. 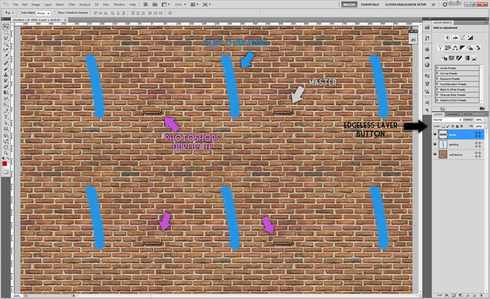 This reply was created from a merged topic originally titled
Edgeless Document Idea.

YES, this is EXACTLY how a tile wrapping tool should behave. Two thumbs up!

Hey, yeah. I want tiling images, or document sizes that can be manipulated easier. It would be a great idea. Please do.

sooo many people want this

how come they dont listen, its beyond me...check out krita

I would like to suggest that there be a tile editor mode:

When zoomed in, it is possible that the wrap would not be visible. Yet when zoomed in at the edges, a certain percent of the surrounding tiles should be visible rather than only allowing the editor to pan to the corner.

Here is an example drawing space depicting my suggestion. The blue rectangle represents the canvas bounds and the pencil is the currently active tool.

This reply was created from a merged topic originally titled
Tile Editor Mode.

Its a shame my idea got merged into here, but we all seem to be wanting the same thing.

I hope people see this!

Having the ideas merged makes it easier to count the people supporting it, keep the conversations in one area, and combine interesting variations in the requests. We've heard this request from a variety of sources, but there never seems to be a large number of people supporting it - so product management always has higher priorities.

BTW - you do have a tiling paint feature in Photoshop Extended using the 3D functionality.

Yeah that feature is still too limiting and not what were looking for.

Thanks for the reply. hopefully we can get more votes up in here.

This really does need to be a feature in Photoshop. A tiling tool would benefit anyone in the games industry. And that is a huge user base. I work at a small company and we still have ~25 copies of Photoshop. I have to tiles textures, complex ones, every day. This tool would allow me to make stuff at a much faster pace.

Lloyd has the right idea on this one!

Chris Cox: This is a very big issue for the 3D industry. I know a lot of people that would use the tool. Honestly I think the reason no one is supporting it is no one knows about the feature request section at all.

Then guide more of them this way. (just make sure to search for existing requests before adding duplicates)

Its been great to see people come here and voice there views on this,

in the past 24 hours its shot up 20ish votes and this is only from telling one game art forum. [quite a few of them come from company's who have multiple licenses all of whom would benefit from this]

as you can see this is wanted by a lot of people, its just getting it out for them to see.

I can't really go out and show this to everybody who wants it, but to get such great feedback from one forum must ring bells with you.

Please Adobe, see this. ask around.

I also spoke to somebody in VFX and this is something that they do on a daily basis [tile textures] so its not just the game art market.

Also this Photoshop Forum includes Lightroom questions/issues/requests.
without them this feature request would be on the front page.

We have heard this request before, we just need to hear it from a larger group, and get details from other users about what they specifically need.

Well of course we want this.

There are lots of us that want this feature, just that signing up just to tick a little +1 button with no guarantee of a result sounds a lot more effort than it's worth.

Also, I didn't know this place existed until Lloyd pushed us here.

Thanks for coming James!
Yeah it does suck but the sign up wasn't as bad as I was expecting.

Basically this would shave off about 30-40% of the time spent on creating tillable textures. Especially when there's allot of details that needs to be tossed around. You can't work non-destuctebly at the moment as you always need to merge layers down to tile them correctly. It's also a huge hustle managing all the layers every time you want stuff to tile together.

Even though there's not that many voting for this, i can't say ONE texturer/artist that would explode out of relief and happiness for a function like this. Both game-art and 3D community are HUGE. We are a very big consumer of photoshop. Don't foreget us please! :)

This is, from a 3d artist's point of view, THE biggest feature that's currently not in photoshop.

As a P.S, i'm coming from the gameart forum Polycount and when Iloyd posted his mocup image the board literary exploded when interest and joy (they, we, thought that he'd actually scripted it). http://www.polycount.com/forum/showpo...

Please, PLEASE give us 3D dudes some love! Photoshop is such a powerful and important tool for us, make it THE tool for us!

Thanks - that's the kind of details we need to convince product managers.

Yes, I agree with everyone on here, I too would love to see this feature.

Also, as Valdemar said, Polycount has very quickly taken on this idea and are all for it.

I feel these user votes are one of the most important thing Adobe can do to add the proper features. Autodesk has started doing this for 3DS Max, and it definitely helped make 2012 its best version yet because of it.

Agree with everyone on here. It was crazy when lloyd posted this on Polycount and people were jumping all over the idea.

agreed. Its kinda ridiculous that Photoshop does not have this feature. I have used paint programs from 1985 that have a mirror/seamless tile paint feature. Painter has also had this feature for years as well. Adobe should review other software packages and features that are successful. Also 3D is NOT Adobes strong point.

Excuse me while I say, DO WANT!

So painting across one of them would paint over into the next. And would scale the brush according to the scale ratio of the borders.

So a painting a seamless tiling texture would essentially be two sets of these - automatically placed at the edges of the image.