Photoshop: Exporting selected frames of video as a single, large image (previously something we could do with the .FLM Filmstrip format)

Any thoughts appreciated on this -

I would like to be able to (easily) export selected sequences of frames of video as a single, large, editable, high resolution image.

Is there any way to do this currently in Photoshop CC2018 ?

If not, I wondered if Adobe could please consider implementing this as a feature within Photoshop.

I would like to be able to edit the selected frames all at once as a single, large image in Photoshop, resaving as a PSD and then using the single image containing the multiple frames for large format printing.

I would intend to edit the image significantly in Photoshop, and being able to quickly assemble all the frames together into a single image as a menu option from within Photoshop would save me a lot of time.

(ie rather than having to copy-paste many many frames together into a new, blank Photoshop canvas)

I would also like to be able to take the large format single image (comprising the multiple individual frames with edits) and be able to reopen this in Photoshop within a video layer.

An equivalent of this feature / functionality was previously available until Photoshop CS3 / CS4 and After Effects CS3 / CS4 as the Filmstrip (.FLM) format.

An example is below, produced using After Effects CS3 and Photoshop CS3, both of which can export the Filmstrip format. Fortunately, for my project, for the moment, both AE CS3 and PS CS3 still run on Mac OS 10.13.4 High Sierra.

I have been able to save Filmstrip files which do exactly as I want through this older Adobe software and hoped the functions it provides could be integrated within Adobe CC2018 at some stage in future.

I realise you can import video into Photoshop and edit each frame independently in a Video Layer on the Timeline, one by one (eg drawing on or recolouring the frames etc etc individually) This is a great feature, but it's not what I'm looking for in this situation.

An example is below -

The test subject I filmed is an object rotating, suspended on a piece of thread against a grey background, exported as a Filmstrip from my After Effects CS3 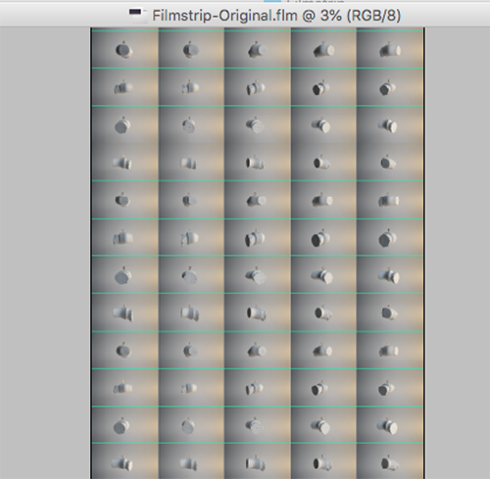 I made a quick test edit in Photoshop CS3, applying some layers to create texture.

I took some photos (of plant leaves and a piece of wood with scratches) and copy-pasted / scaled them up in Photoshop CS3 to fill the entire 9640 x 28496 pixel Filmstrip image. Then I applied blending effects and transparency to integrate the textures within the frames of the Filmstrip.

Then I flattened the image in Photoshop CS3 and saved the Filmstrip.
(At this point if I wanted to I could obviously also resave the file as a PSD for further editing and printing, but this was just a quick test so I didn't do so on this occasion)

Then I reimported the edited Filmstrip file into the After Effects CS3 timeline and added it to the Render Queue as a test export, creating a 1920 x 1080 pixel video based on the edited, textured Filmstrip.

The result of this experiment is a video with various distressed textures applied very quickly and easily over all the frames of the original subject. And a large, high res, still image, comprised of all the selected frames which has also been created very quickly.

The Filmstrip format allows me to work quickly, applying texture to all frames at one time (effectively as a single Photoshop image composed of loads of small compartments) because all the frames are presented together as a grid in a single Filmstrip file.

I also like this process as there's a degree of uncertainty involved in what you're going to get as a result - it depends what images you use and which blending effects you apply in Photoshop.

I could have imported the original video into Photoshop's Timeline and edited each frame individually, treating each frame as a single image to copy paste texture on top of, or to draw / paint on top of etc etc.

But I think working in this way would have taken much longer.

ie because I'd have had to create texture on each individual frame, one after the other in the Photoshop timeline, rather than just copy pasting various large format textures over all the individual frames at once as I can within the Filmstrip format file.

If there is a way of doing the above in Adobe Photoshop CC2018 that's as easy as Filmstrips in Photoshop CS3 and After Effects CS3 I'd be interested to hear about it.

I have been looking at a late 90s music video for 'Stupid Girl' a song by a band called Garbage.
https://www.youtube.com/watch?v=2GhPUAVgHZc

As I understand, the effect here was achieved by taking the original film for the video and distressing its appearance by placing the whole roll of film in a bath of acid / scratching it etc etc https://www.youtube.com/watch?v=fELWButB9t0 (Garbage - Stupid Girl documentary 2014 - YouTube - Process is discussed at 20mins 50seconds). ie so all frames are being affected at one time.

(If the director had acid distressed each frame individually, one by one, this would have taken much longer, and likely the distressing effect would not flow so naturally throughout the duration of the video.)

Any thoughts welcome and thanks very much everyone for your time.

Hi John, this would probably be best solved trough scripting. Do you know javascript at all?

Hi again Jeffrey - I think we spoke once previously - thanks for getting back to me.

Unfortunately, no, I don't know javascript.

I know a little Actionscript from a long time ago but no scripting other than this.

Would there be any way to get these older but still extremely useful Adobe plugins working with Photoshop CC2018 and After Effects CC2018 please?

I tried dropping the CS3 and CS4 Filmstrip.plugin files in what seem like the appropriate folders in Photoshop CC2018 and After Effects CC2018

I was hoping the save as Filmstrip options would show up in the relevant places, but unfortunately this didn't work. Maybe I have the wrong folders though.

Is it just a case of dropping them into appropriate Plugins folders or do I need to do something else?

Alternatively, would it be possible please to make Adobe CS3 and CS4 available as downloads through the Adobe Creative Cloud subscription?

Thanks again for getting back to me and for any advice.

It's unlikely given the amount of work it would take to rewrite these for modern 64-bit versions of Photoshop and After Effects for the handful of people that still use them - which is why I suggested a script. Let me see if there's a script that would work to do this.

Thanks for checking for a script Jeffrey, that's very much appreciated.

All have given some warnings before opening saying they aren't optimised for the current OS, but then go on to run absolutely fine.

I'm tempted to buy a second hand copy of Adobe CS4 (£265 on eBay I notice) just for the benefit of being able to use the Filmstrip format. But it's quite possible an update to the Mac OS could render my CS4 investment unopenable without warning one day.

Hence I wondered about making the CS3 and CS4 software (which appears to work ok) on the current Mac OS available through Creative Cloud (as CS6 is).

Thanks again for your help, I look forward to discussing any script you can locate that would be able to do as I've described. This sounds like a better long term solution.