Hi, guys. You're the company that makes Illustrator so I was quite shocked you got this wrong in Photoshop CS6 strokes.

If I don't close a path, I don't want a stroke drawn between the two open ends, yet it draws one. Fill: sure, I can turn that off.

Please consider fixing this. It's really hard to create basic vector elements when the stroke can't handle something so basic.

I've updated the title and there is a record of the issue in our internal database. Thanks.

So the bug is acknowledged but it's not fixed.

I sometimes understand that a bug becomes a "legacy behavior" for backwards compatibility, but you JUST introduced this feature. If you don't fix this now, it'll only become harder to fix it. 10 major versions 15 years later Photoshop will still be unable to render open paths correctly.

And this is how good products become horrible products, cough and die.

Please tell me you'll fix this in CS6.

But other users do want to stroke open paths. Some even get really furious that the line tool has a thickness and a fill instead of just a stroke.

And Illustrator does the same thing (allowing, and defaulting to) a stroke on an open curve segment.

If you do not want the stroke, turn the stroke off.

Hi, there's a misunderstanding about the problem I'm describing.

Here's a reproduce case and expected/actual:

1) Use the pen tool in Shape mode and click at three points (let's call them A, B, C) thus creating an open path of two segments.

Are you using a layer style stroke or stroke from the tool options bar?

I'm using shape strokes, new in CS6, and not layer effects. But see my comments further down, there's more to reproducing it.

OK, you left too many details out of your original post.

It means the reproduce case is more specific. Stay tuned.

I guess i'm not getting what your seeing.
Could you post a screenshot or short video?

Okay i see what your talking about..

Photoshop incorrectly strokes between the start/end of an open path, if that path was created as a standalone path, and PASTED into a shape.

EDIT: It also starts adding open/close strokes on other shapes.

Apparently mixing/pasting shapes loses state about what to stroke at some point, or something.

The way I'm seeing the bug is simply that when there's multiple subpaths in a Shape, all subpaths are stroked as if they are closed regardless of being open or closed.

Conroy, you're right. I've tested this a bit more and so basically open paths render closed when there are multiple components.

Opens paths render stroke as closed paths when there are more than one components in the shape's path (as a result of pasting or starting a new component, doesn't matter).

1) Draw a new shape with the pen as an open path consisting of three points A, B, C
2) Add stroke to the shape, notice it strokes the lines A-B, and B-C, but not C-A (properly).
3) With the shape selected, the path deselected, set the Pen tool in "Combine shapes" mode and draw a new similar open path, with three points D, E, F.
4) Notice now both open ends C-A and F-D render strokes.
5) Erasing any path component and leaving just one restores proper rendering of open paths.

The line between two end points on an open path should never render a stroke.

A stroke is rendered between two end points on open paths when one shape contains two or more path components.

Chris, you've changed the topic of this post incorrectly. Please don't do that. My original topic was "Open strokes are rendered incorrectly" and not "Open paths are rendered with a stroke."

It's an entirely different meaning.

"If I don't close a path, I don't want a stroke drawn between the two open ends,"

Not a big deal :) I don't mind clarifying, but I notice bug handlers in general (in any company) sometimes cast a judgment quickly and may bury a real problem. With a high volume of feedback it tends to happen.

EDIT: Thanks for changing the title again ;) (this time I don't mind hehe)

Sadly, photoshop joins the ends together and I can not see anything that says "make shape open".

Can someone please give me a clear explanation of how to do this simple task.

Depends entirely on how you're applying the stroke. If you're doing it through the layers panel (Blending Options) or any other way which applies it directly to the *layer*, you'll get this outcome because it's using the fill as a base for that outline.

Instead (and unfortunately only in CS6), you'll want to use the bar along the top with the path selected with the direct selection tool (shortcut A). Set the fill to to none (white icon with a red line through it) and your stroke to whatever you want.

This bug report is for using this method with multiple paths on a single layer so use multiple layers until this bug is fixed. Hopefully soon, it's caused me a few problems already.

Thanks Brian, I think this may be too hard to understand over the internet. I am using CS5 so maybe it is different.
I can not find any place in photoshop to follow this instruction: "Set the fill to none (white icon with a red line through it)".
That sounds like what i am familiar with in Adobe illustrator, but i can not find it in photoshop for paths or shapes.
I found a (not ideal) way to get a path to draw an "s" shape without filling it, by creating a path with the pen tool, then using "stroke path with brush".
But I was hoping for something more like in illustrator, where the stroke thickness is editable, not committed in pixels onto the layer. ie. more like the interactivity you get when adding a stroke in the layer style.
Sorry that my question is not %100 on the thread topic.
Thanks again for your help above.

Yeah, it's a new feature of CS6. Photoshop was never really intended for true vector work but it's slowly getting some illustrator features to help workflow. Your method was pretty much the only way in CS5 and below and, as you note, it's a destructive action and cannot easily be undone. This method allows you to edit thickness, alignment, path caps / corners etc. You'll have to upgrade, I'm afraid. :(

+1 for this fix. Just encountered it today for the first time. Upgraded to PS CS6 two weeks ago. C'mon guys please sort this out soon!

OK, I got it:
(On Photoshop CS6, didn't tested it in older versions):

1. Select the pen Tool (make sure no shape layer is selected)
2. On the Properties toolbar (the top one) Make sure "Shape" is selected from the dropown menu.
3. Next to the dropdon menu - Fill color should be - NONE.
4. Select any stroke color.
5. Start to create path - notice photoshop will not close your paths.

This is not about the fill, it's about the stroke.

If you read the discussion you'll see that it happens when fill is NONE, but you need two or more path components per shape layer in order to reproduce the bug.

Definitely need this fixed for the complete path to happiness.

UGH! I just got bit by this coiled rattler of a bug. Trying to create some complicated ornate "shapes" and need open paths to STAY OPEN! Instead I get these uninvited edges trying to close everything in. Gonna be a nightmare to have every path on its own layer, but that seems to be the only workaround I could find and echoed here as well. PLEASE roll this in with CS7. As a previous poster said, once legacy bugs get passed over and seems much more difficult to get them addressed. Thanks for your support on this issue.

This still seems to be an issue in CC 2014... Really could do with a fix, creating simple non-destructive lines using the correct dialog (NOT blending options) seems like a no-brainer.

Just to clarify, a single line can be drawn. Adding any more lines to a single shape layer causes the ends to join up AND intersect each other.
https://dl.dropboxusercontent.com/u/6...

This is still an issue in CC. +1'd for a fix. *fingers crossed* for now i will just bloat my psd with path layers!

Hi there, Chris, Jeffrey and all,
I tried to use the freeform pen tool in Photoshop and stumbled on the same problem. I supposed there would be some kind of bug or feature request, so I'm mostly adding one voice here.

Bottom left, purple shapes : can't have an open stroked path if I have more than 1 path on the layer

Right, yellow shapes : I wanted to draw hatches with the freeform tool, and can't. Easily scalable, editable directly in Photoshop at any moment (no back and forth with Illustrator needed...

Is there more that I could do to push this in the front scene ? 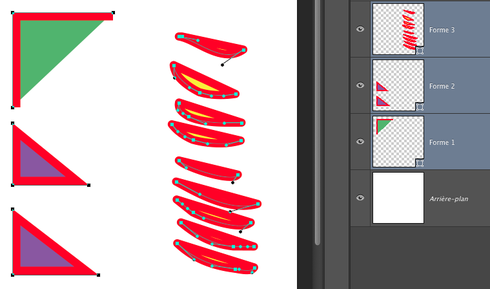