Photoshop CS5: Animation will not play

I was making some animated gifs last night with no problem and decided to make more today. However, I'm facing the most ridiculous problem and it's making me go crazy. The animation will not play. I'm setting it up the same way I always do it (I import the dicom files and then make frames from layers). However, after making the frames from layers, where all the frames would usually show up on the timeline, only the first frame has a loaded image and then the next however many frames are blank/not loaded. And whenever I try to press the play button, the play button "works", but it never plays the animation (it's just stuck on the first frame image). But when I go to save it for the web, the preview works fine and shows it moving. It's just while I'm in the process of making the animation that it doesn't play.

I don't know what I'm doing wrong because I'm only doing the same exact thing I've ever done. I uninstalled and reinstalled and even reset my preferences. Is there anything else that would stop an animation from playing. 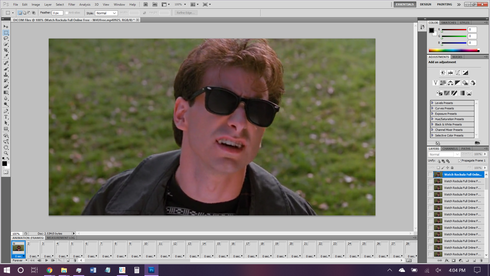 Could you post a PSD file with all your layers and the animation set up so we can try and troubleshoot? You can use dropbox of some other sharing method and post the URL here. Thanks.