Ever since upgrading to PS v20.0.0 I have experienced crashes when clicking on the font selector in the character panel. I am currently on 20.0.3 and still having the same issue.
I went through all of the troubleshooting steps of validating my fonts, running the "Font Test" script, and deleting potential problem fonts from my system.

The problem is that the crash is not fully repeatable. It doesn't really matter what I am doing leading up to the crash, it just seems random. For the most part the character panel works fine, but at least a few times a week I will get it to crash. My only thought is that I am using a Wacom stylus when clicking on it, but that seems unlikely.

Has anyone experienced this kind of issue before? Or is this a new bug in v20? I've gotten to the point of saving my file before I change any font due to its frequency.

Not what you probably want to hear, but I monitor the forums daily, particularly for font/text related issues.  I've never heard of this and don't recall any other reports since we put in the feature.

Would you mind sharing your System Info?  That might shed some light.  And, well, have you tried working with the stylus.  I've heard MANY issues involving styluses like that.

I am using a Wacom Intuos Pro Medium (not the screen version) with a standard stylus.
(I am not sure anything I could do to the pen as you mentioned, aside from updating wacom drivers)

Font Preview is turned off.

If I click either of the areas shown below, it will cause the crash. I always report the crash when it happens with the built in report function. I have not had it happen when using the properties panel font dropdown.

Let me know if any other info would be helpful. Also, if there is a way that I could send a crash report to you directly, maybe that would help? (I would need a file path for where the report files are saved)

Thanks for your help! 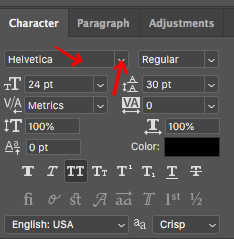 Okay, here's the strange part.  Reading what you wrote, I would say "ah, corrupt font cache on Win10" but you're a on Mac and you said you ran the font utility.  Did you also clear the system font cache?  If not, it will just re-corrupt ours.  Are you getting a clean bill of health from the font-test script?

To rule out the Wacom, I would suggest just disconnecting and disabling it, using a regular mouse instead.  Assuming that the problem goes away, then we know that the stylus is a contributing influence.  Or if it still crashes, then we know it's gotta be a font or setting file.

Have you checked for third party fonts?  The free ones you get over the web can be rather buggy, particularly those which map across langauges, particularly Arabic, Persian, Devanagari, and other Indic ones.  I've also encountered issues with Klingon, Elvish, and Dwarvish rune fonts.

What is the text you have?  Just the default Lorem Ipsum?  Or do you have characters in your text that might not exist in the font due to language?  Under Edit > Preferences > Type, is the second checkbox on the left checked, for Enable Missing Glyph Protection?

What happens when you click these same UI elements in the Options Bar?  Does it crash there too?

In the crash report, feel free to put in something like "David Mohr asked me to send this -- can you forward to him?" and it'll get to me.  8-)  We really do check those, so as much detail as you can provide is always helpful when we're trying to slueth out the cause.

This is weird, but let's see what we can figure out...

I followed the steps in this guide... https://helpx.adobe.com/photoshop/kb/troubleshoot-fonts-photoshop.html ...all the way until step 8 (I don't know what font might be causing the issue). I deleted the CT Font Cache folder, then ran the command in the console. I will try it again and see if anything changes.

I'll try out using a mouse as well to try and localize the issue.

While I do use third party fonts, none of them had any issues when running the font-test script (I have the log file for that test as well). Anything I'm working on is pretty basic stuff. Mostly just normal characters, an em or en dash is the most extreme character I'll use consistently. As far as the content of the text layer when a crash occurs, it varies. Sometimes it is Lorem Ipsum, other times it is already type out content. It can be a brand new text layer, or one that I've been using for days.

While I rarely, if ever, use the elements in the Options bar, it has never caused an issue. I'll incorporate it into my workflow a bit to see if anything happens.

The hardest part about this is the lack of repeatability. I haven't noticed any common situation between the 10-20 crashes I've had, nor can I trigger it on demand. At times I will go for a few days and not have an issue, then the other day it happened to me 3 times in an afternoon. As you said, very weird.

Thanks for your help on this! I'll be sure to comment your name next time it happens.

I just had another crash. I mentioned you in the crash report. Here is what i wrote in the report in case you don't see it for some reason...

"This occurred when I used the magic mouse, not the Wacom stylus. It was also when clicking on the character panel element, not on the options bar.

Right before it crashed, I had just printed and saved my work. I checked the status bar on the bottom left, and it didn’t show any sign that the saving hadn’t completed yet (I had the idea that perhaps it crashes when I click on it while it is still saving).

I have yet to clear my font Cache at the time of this crash."

Thanks.  Please let us know if clearing the font cache, both the Photoshop AND OS cache (otherwise, they can re-corrupt each other).  Installing fonts and even some poorly-made fonts can corrupt the caches.  Clearing them both caches would address this -- I need this ruled out before I pass it to developers.

David,I have deleted the CT Font Cache folder (from the trash as well), and then ran the command to delete the OS cache from the terminal. I have done so with all adobe applications closed.

I will let you know if the program crashes again after clearing all caches.

If you crash again, definitely put my name in your report.

One more thing, Joe.  I was talking to a developer and I want to rule this out as well.

Please got to Preferences > Performance and at the bottom of the dialog, under Options, there's Legacy Compositing.  Is that unchecked?  If so, try checking it and see if the problem disappears.  I would love to hear either way.

I've gone the last few work days without a single crash. Out of curiosity, I switched off Legacy Compositing this morning to see if it would crash again. Sure enough, here a few hours later it crashed on me again. For whatever reason, I wasn't given a report window popup from Photoshop. The Apple window come up, but not the Adobe one I can send to you.

Also, something interesting that I've noticed is that Legacy Compositing is now checked back on after re-launching the program.

Hi Joe,
Could you possibly email me (sender@adobe.com) the PSD file you're working on where Photoshop randomly crashes?  I've been trying to investigate this issue for a while and appreciate any help I can find.

It wasn't a particular file that would trigger the issue.
Also, a crash has not occurred for a few weeks now. I'm not sure if toggling on Legacy Compositing fixed my problem, or if the changes made in update 20.0.4 made a difference.

Thanks for the update.  Fingers crossed, that the setting change to Legacy Compositing fixed it.