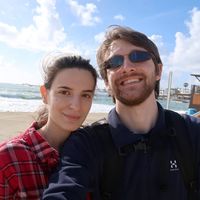 Photoshop CC: Having major lag after updating to Windows 10

I've been using Windows 7 professional for years and I only just updated to Windows 10. I use Photoshop, Illustrator and various other programs for work so it's quite import for them to function correctly. However, I've only noticed lag on Photoshop.

For work I use files up to 2GBs or more when I was working in Windows 7, my computer and Photoshop had managed this without any issues. After installing Windows 10 and running Photoshop I can't do any sort of paint stroke or editing without major lag. The stroke of paint with a normal soft brush won't even reach the end of where I am painting. It will stop around 3/4 of the way if I let go and if I hold my pen down it will continue to slowly make it's way to my cursor.

I have put all the performance settings up and changed them around with no difference made. I monitored my computers performance on Task Manager while I worked, my results were: CPU max 40-50% Memory maxed 30% and GPU maxed 25% usage. That is when painting and receiving major lag on the brush strokes. It's simply completely unworkable. This is with a file only a few hundred MBs big and no programs running in the background. My file size doesn't seem to affect how much more or less it lags.

I'm using a Wacom Intuos 5 for drawing and editing. Lag is both with tablet and mouse.

jumping from WIN 7 to WIN10? that is a leap...how OLD is the computer?

Is it wifi or bluetooth wacom? you don't mention anything about that and from what I read I would need more information, because in my workflow I sometimes find that other apps like MONITOR CALIBRATION or GOOGLE DRIVE SYNC and Bluetooth in general to slow my system down or I mean....I get stuttering like what you say strokes that will lag?

My wacom tablet I do have does that only because it is running on an older machine with not enough graphics processor juice to really keep it going....

1GB seems like a lot of GPU about 5years ago...

so if you are just now updating to a NEW OS? WINDOWS 10? and then expecting the computer (I don't know its AGE that is the problem ) on MAC Forums it shows the year you bought the machine.

that is my advice. MORE GPU to run CUDA processing....and GRAPHICS.

HOW LARGE the file you are working on makes a big difference too...

well I reread yours and you did say some other information I didn't see....

But WACOM bluetooth and WIFI can be a problem if you have week batteries.

I'm not using any Bluetooth or wireless for my intuos 5, it's plugged into a USB 3.0 port. Also, the lag happens exactly the same with a mouse. It's not tablet specific.

1GB may not be very large nowadays but it's plenty for working with Photoshop, going from Windows 7 to Windows 10 doesn't just suddenly steal all of your hardware resources. On Windows 7 I was working with files larger than 2GBs without lag. I can't even do a paint stroke on a blank A4 canvas without major brush stroke lag in Windows 10. Also considering with a large file open with resource monitor and working in Photoshop it's not going above 30% GPU usage with settings to use it.

I have plenty experience with bench marking and performance testing and it's definitely not my machine which is struggling. I can do professional video editing, zbrush and more on this computer and I don't lag on any of these software. This is Photoshop specific which is acting differently after the system update.

Also, I didn't "buy" this machine it has been upgraded over the years. It is due a big upgrade but since I'm going to be traveling for a couple years from January there is no need to upgrade the hardware. But again, the age is not a problem, I run plenty programs on this computer which are very gpu and cpu intensive to use. Zbrush and rendering software being much more than Photoshop.

So again, this is a software issue not a hardware issue. That's why I need to get down to the bottom of this. I make my living from my computer, mostly using Photoshop. I can still run a lot of actions and do general edits within Photoshop but I'm unable to do any brush based tools.

I am having similar issues in Lightroom Classic

Make sure you have the latest PS 19.0.1 update installed using Help> System Info as shown below:

I keep Photoshop up to date and I check on Creative Cloud before working.

Singleton has it correct,  GPU needs to be 2 or in my case 4Gig.   Requirements for CC indicate "paint is affected" and is the area where a problem may show up first/most.  I expect you are on the ragged edge now and W10 put you over.

I hardly think so when it's barely using any of my GPU. Considering also I have 32GB of RAM on top of the GPU RAM. Also as I said to his reply, I use much more GPU intensive programs including games, ZBrush, video editing software and rendering software. Photoshop uses barely anything in comparison and they work perfectly without any problem. This is a software problem, not a hardware.

It may help if we could see your Photoshop System Info. Launch Photoshop, and select Help > System Info... and copy/paste the text in a reply.

Can't replicate this on a 1.5Gb PSD file with 6 other PSD files open using W10 with the latest PS CC running on a fairly old Samsung I7 2.8GHz laptop with only 16GB RAM and an Nvidia GTX 675M/2GB with multiple other applications loaded without a Wacom. I don't get any lag at all on mouse and virtually none on the pen using an iPad Pro running Duet as a graphics tablet substitute over USB, which I would expect to give seriously worse performance than the Wacom.

The setup I have above is even perfectly workable if I run it from a remote MacBook in a different part of the house using RDP and move the graphics tablet simulator to the MacBook - I should have thought that would create much worse graphics performance issues than your setup.

I think your problem must be elsewhere than PS or W10 themselves.

How did you upgrade from W7 to W10?  Clean install or direct upgrade? I'd be inclined to reinstall W10 clean if you just did an upgrade to see if that helps.

What is the interface to the Wacom?

Is the mouse native PC, or on the Wacom? If native, what is its interface?

If the interface to the Wacom is wireless, you might scan your WiFi network setup for channel congestion - that could cause lag and jerky response in wireless input devices. Try using a different channel and see if that alleviates the problem.

Are you using the native W10 drivers for the graphics card - try installing a more recent Nvidia driver - that could help.

If it worked okay on W7, I would expect it to work better on W10, unless there is some sort of incompatibility issue between your rig and W10.