When the Maintain Aspect Ratio box is unchecked, Free Transform should be non-proportional.

However, in version 20 (Oct 2018 release) the aspect ratio remains locked whether or not the Maintain Aspect Ratio box is clicked. Only using the shift key (new behaviour) seems to work.

Go to Preferences > General...and check "Use Legacy Free Transform" for the old behavior.

How about you make a setting called "Use Alternative New Free Transform" for those wishing to use the new behavior and use the old well-understood behavior by default as before?

At the very least, it shouldn't be called "Free Transform" anymore. Since the default no longer lets you transform it without restrictions, it's the opposite of what it once was.

I thought it was simply called Transform by default but it says Free Transform. Good point.

If I am not mistaken this has been a conscious and prominently announced decision on the Photoshop team’s part. Quote from https://helpx.adobe.com/photoshop/using/whats-new.html

No, that's not the issue. That was the initial thought in the Adobe forum discussion linked above but that's not what this is about.

The change in behaviour to Transform proportionally by default is a new feature - despite many people initially thinking it was a bug.

The issue here is that the Maintain Aspect Ratio box is being ignored by CC 2019 when transforming. Whether it's checked or unchecked, the transform is always proportional. It has now been confirmed on both Windows and Mac.

If I am not mistaken this has been a conscious and prominently announced decision on the Photoshop team’s part.

Understood and that's what I thought initially in the Adobe forum discussion linked above where this bug report had its origins.But that's not what is being reported here. The bug here is that the "Maintain Aspect Ratio" setting has no effect with the new default behaviour.

the bug here is for the constrain button in the tool options bar.  It's being ignored when unchecked in the new default constrained mode.  good bug.

Is there an option to roll back to the old behaviour?

Sorry for the frustration. Since people have come to expect that grabbing the corner of a window will transform it to scale, this is now the default. The attempt was to make it more intuitive. So now, constrained transform is simply transform (Cmd or Ctrl T), sans shift. Now *free* transform is invoked with the shift key. You can still hold the option key to center. If you would like to change it back, here are instructions.Thanks,Hannah

Thank you! Bless you! :D

But Hannah, what is the expected behaviour when the 'Maintain Aspect Ratio' box is unchecked? Should it not perform as when shift drag is used?

Unchecking the aspect ratio link box should allow you to drag a side and not keep the aspect ration. THAT is intuitive. Please fix this bug.
The shift key + transform just does "transform again".

Is there any way to get around this bug?

It's a pain, but when you're in transform, holding shift while you click and drag one of the transform box's handles. That's been working for me. Doesn't seem to matter if the aspect ration box is turned on or not.

Oh, thank goodness there's a way to revert. I don't have admin privileges on some computers I work on, so I have no control over whether they get updated or not. Switching back and forth has been driving me crazy.

A checkbox somewhere in the preferences would be a bit nicer, but this works.

May I point out that the shift key works as a constraint for other things, such as the move tool, rotate tool, transformation with the distort, etc? It even works in Microsoft Word when you insert a jpg and move it. The inconsistency drove me crazy as I'm sure it does others. I'm fine now because I wised up and I went back to v19.

Agreed, shift to constrain is a fundamental graphics convention used by EVERYONE. Adobe doesn’t understand, or doesn’t care (or both). Either way it’s so embarrassing.

I absolutely disagree with Hannah's statement "people have come to expect that grabbing the corner of a window will transform it to scale" -- I am one of the many people that expect to move ONLY THAT CORNER unless I hold down some extra key indicating I want to do MORE than that, or unless some toggle button is set to indicate a proportional restraint. Photoshop is not some beginner's simplistic fool-around toy. It should NOT be changed so carelessly.

I dont have a Photoshop Settings folder under Preferences? How am I supposed to do this?

I dont have a Photoshop Settings folder under Preferences? How am I supposed to do this?

What are you referring to? Do what?

I was trying to comment to Hannah about her instructions on how to use text edit to revert the update... her path for MacOS doesn't correspond with my system. When I follow the path there is no Photoshop Settings folder in that area. And if there is, that is not what it is called.

When you alt-click the Menu Item »Go« in the Funder is there an item named »Library«?

Text committing modifications is also screwed up, full of bugs. Please just make un update that keeps the basic functions of this program the same because I earn a living with it.

Thank you again, somehow I still have the old version in the cloud. I'm sticking to 19.1.6 because 20 froze twice this morning besides the free transform issue.

Me too Dragos Bruma. I have had a few problems with v20.0 here. . . I think I will wait until all the bugs are fixed.
https://feedback.photoshop.com/photoshop_family/topics/photoshop-cc-v20-2019-crashes-when-using-the-...

I'm also having this problem with the newest version (v 20.0). In addition, I've had to quit and restart Photoshop numerous times because tools completely stop working. I can click on the tool or use keyboard short cuts... but can't actually use the tool. This is the first time I've had issues since I started subscribing to CC. I can't believe how buggy this update is. Note: I'm running MacOS Mojave.

Please make apps in the suite work more uniformly, not differently - especially with shift to constrain proportions. And don’t spend ANY time fixing this that ain’t broken. This is screened up sorry.

Folks:Thanks for your feedback. We feel your frustration and we're working to try to fix everything we can, as quickly as we can.We ARE aware of the issue with the Maintain Aspect Ratio button. It IS a bug, we've been aware of it for some time, and unfortunately it's much harder to fix than you might think. Rest assured, we're going to fix it as soon as we can.In the meantime, please hang in there. Depending on the layer type you're transforming, the Shift key WILL work to flip the default transform method (proportional vs. non-proportional). Turning off Proportional Transform via the gestalt control -- see Hannah's post above -- is another way to go if you get too frustrated.-Eric Floch

We understand it's difficult to fix, but why release a new version with bugs that hasn't been thoroughly tested? This is not a way to win customers’ hearts.

May I know how many testers you engaged to check how Transformation works? Every user who upgraded Ps to current version found some bug or inconsistency about this feature. How that is possible none of your testers found something that is not possible to miss? Do you even tested 2018 and now 2019 releases or you involve us to test that was foisted?I believe you completely did not test it since you have ZERO testers. If you had some, they'd notice that immediately. There is no way to deny that, we don't need any proof to see how obvious that is.

While i understood somewhat the reason for the change, why is it not the default for any transform. I mean, now. instead having to remember not to hold the shift key to constrain proportions.... but oh wait it's a shape layer and that doesn't work, you still have to hold shit to constrain proportions, so now it's twice as confusing to new users because instead of one universal transform default, we now have essentially two defaults depending on the kind of layer.How can adobe think that makes more sense than trying to teach users the old tried and true method of holding shift for all transforms?

Our questions are useless. They are no going to give any explanation why that was implemented this way. Why noone can explain why this was done not other way? Ignorance on a mass scale.

I wish they would revert this change. I liked the way it worked before.However, if they won't, at least make the "lock" button work properly.Example:If the lock button is ON dragging will scale the image proportionally. Shift + drag will free-scale.If the lock button is OFF the behavior is reversed. Dragging will free-scale. Shift + drag will scale proportionally.This way you would keep old and new users happy.

Select an object, and drag the side node to stretch sideways and realised Photoshop now has the 'maintain aspect ratio' on as default, unticked the link icon but it does not disable, the only way is to hold Shift when resizing which is the opposite of the old way.

Can someone tell me if the Constrain Button on the toolbar in PS cc 20.0.1 is fixed with the update?I won't be installing the new version until all the bugs have been fixed.Cheers!

It does NOT appear to be fixed. I updated a couple hours ago and just now tried it out, and turning the constrain button off does not turn constrain off. I still have to hold shift to resize without constraining.

Thanks Suzie I didn't think it was fixed as I didn't see it listed amongst the 'what's new' in V20.0.1

Using constrain off/on button works only for the values you enter/scroll manually within the boxes.

This is very frustrating! I hope it gets fixed soon.

This reply was created from a merged topic originally titled The free resizing button not work. 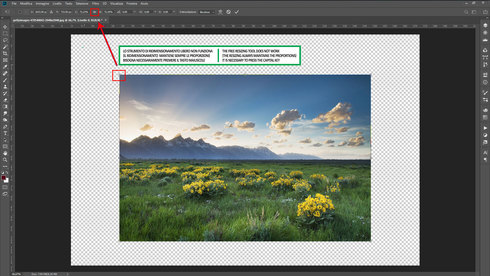 This reply was created from a merged topic originally titled Now, Photoshop scales proportional by default.. yay. But Adobe still forgot the l....

Yes, people tend to scale proportional than warping the image. I'm glad Adobe finally got that - at least some of it. Even if you want to scale just one side you actively choose to scale this side by grabbing it! Duh'...

Same goes for the numeric scale option in the top bar. Adobe, it's the same thing! Activate the proportional link icon by default! What's wrong with you??? It's one click more every single effin time!

By the way, the unit in this input should always represent the one chosen in the ruler or info palette. You can still change it of course but the default should orientate itself on the global option!