I have a 3D character from Fuse, in a 3D layer in latest version of Photoshop.
When I try to render the 3D layer, Photoshop crashes.
The crash reporter locked up and became unresponsive, so I couldn't use it to report the bug. I have 100% repro rate on this issue. Have tried with 2 different Fuse characters. No joy on either

This issue should be fixed in the current version, Photoshop 2020 v21.x or later. Let us know if you're still having trouble.

Thanks for reporting and submitting a crash report. We're investigating this issue.

Having the same problem. January 2019.

Partial workaround:
Try removing > Hair/beards on the Fuse models. I believe the issue might be those opacity maps.

OK, thanks, will try. Though hair is fairly useful on a 'model'......
Nonetheless, a partial workaround is better than none! :)

The opacity maps on the hair do indeed appear to be the problem - I've managed to get it to render not by altering the model, but simply by switching off the opacity for the hair: 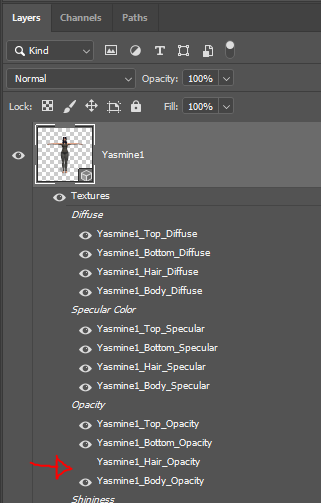 Any new updates from Photoshop on this? My team is having the same Fuse character issue. The hair opacity workaround is true for us as well, but my character's hair looks like a wig made of steak fries. Any chance at a resolution?

Exactly the same problem. Exactly the same 'solution'. Meanwhile, it's back to Daz 3D for me. Fuse has great potential, but it would be more useful if static poses were built in, rather than having to export to Photoshop. It would also be helpful if Fuse had the capacity to export the model as png. Having to go through Photoshop is a nuisance (especially when it doesn't work properly)