Photoshop CC 2018: Quick Export As PNG extending canvas on save

Sometimes I need to move the subject matter off canvas, which before the new update was not an issue.

Now, whenever I move a layer off the canvas it will extend the canvas in a seemingly arbitary way ﻿during the Quick Export As PNG﻿ process. There is no visual representation in Photoshop nor do I have a need for this to be happening. It is making the dimensions on some of my images well beyond the sizes that I require.

I have figured out how to replicate the issue.

This ﻿only﻿ happens when visible pixels are moved off canvas. What Photoshop does, seems to be creating white space in the opposite direction of where the image was moved.

Some examples are below, as well as explained in the forum post: 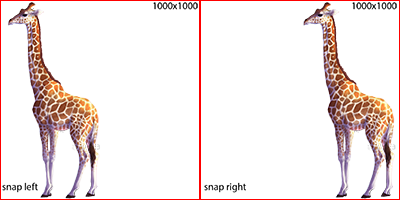 When using the snap feature, as long as it stays on screen it will remain at 1000x1000.

The moment that the image moves off canvas, the OUTPUT file will show the odd dimensions ﻿but﻿ this is not shown in Photoshop at any time before or after export. 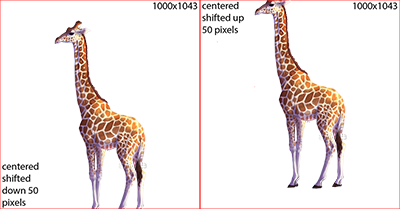 I can confirm that this happened on another computer using version 19.0, but this does not occur on version 18.1.1 which is what I was using before I updated.

Yes, this has been a bug since Export As was introduced. You can workaround by adding a blank layer mask to the layer.

I'm not saying you are wrong, but I never experienced this issue before with any versions of CC 2015 through 2017. Thank you for the response about the blank masking layer, that does seem to work.

No it hasn't been a bug since "Export As" was introduced. This just started happening in PS CC 2018. I tested this in PS CC 2015.5 and 2017 and was not able to reproduce this behavior in those versions. At the time of writing this, current version of PS CC 2018 is 19.1.4 and this issue does still exist!

You should then write separate post in this theard with uppercase letters, so some employee is going to realise finally it's a bug and log it (or at least check it wasn't yet to refresh that). Maybe I will do it when I have a more time...