I just updated to Photoshop CC(2015) version 2015.1. Adobe changed the UI to the flat look you see on phones and tablets. I do not see any way to select the classic interface, which I'm sure many desktop users of PS prefer.

This feels yet another attempt by Adobe to be trendy without caring about what users want or need. Didn't they learn anything from the dumbed-down Lightroom import fiasco?

New UI is better. More contrast, less pixel trash gradients, useless input fields and ect. More contrast numbers and icons. And all this grumbling are nothing as a resistance to change.

Inability to understand or easily navigate a UI isn't a failure of the user.

Very BAD interface. Photoshop - it's PROFESSIONAL instrument, not for mainstream, geeks or teenagers with IPhones, and you must respect your users. If you wish to add new functionality - do it, please, but allow professional users keep earn money and do everyday job, instead of wasting time with this "fancy" interface.

Bring back the old look and feel of the user interface, this is to hard to SEE, READ, and FOCUS on when your trying to do actual production work in Photoshop for 8 - 10 hrs a day. I’ve been using photoshop for 20+ years and have seen a few things you have changed along the way that I might not have agreed with but this is COMPLETELY STUPID!

NEVER been so DISAPPOINTED in an update as this Photoshop cc2015.1

The poorly centered text on buttons bugs me, too. Also, replacing the white boxes of input fields with a black line is a big step backward, since it's harder to tell at a glance where to click. It almost makes it look like everything is grayed out and unavailable.

The toolbar icons don't have the same style throughout. Most of them are bold and dark gray, but there are still some like the Ruler, Smudge and Healing Brush that retain the thinner lines with subtle shading. Generally, I like the old style icons better, but the new bold ones aren't that bad.

This reply was created from a merged topic originally titled Title:That new interface :(.

The UGLINESS of the latest PS CC version is astounding. Please send the designer(s) back to design school and learn how to shape an attractive interface. Even the tool icons are UGLY. All the dialog boxes are UGLY. Bring back the previous interface.

Yeah, this is garbage. (And I like the flat style. When done well.)

Seems like Adobe isn't practicing what they sell. These apps should be beautiful in their design.

I'd be fired if I presented this crap.

And we pay for it.

Hello there,
today I made the update for the new Photoshop CC Version. After several updates with new technical gadgets und cool tools, now adobe has changed the interface.
More flat design, more purity, more APP style ... I can imagine why they have changed it - but I have to work with photoshop everyday and for me it is a big loss of usebility and comfort and it is not possible to change it back.

What do you think?

If you guys already think that THIS is flat, you should take a look at the new "design space". I`d be curious, what you think about that one.

Just want to add: another trick like this one, and I'll quit using and paying CC. There are alternatives out there, and pretty good ones. One thing holding me now is habit. And patience. This is not forever.

BTW I think they will revert UI back to original, this is obvious. New UI is so ridiculous. It's just fubar. It's like alpha-stage software that's gone to masses by mistake. How this can be happening to a professional tool?

With CC they have started to push out too much new features before they are actually done and properly tested. :/

This reply was created from a merged topic originally titled Photoshop CC 2015.1: New User Interface is a FAIL!.

Bring back the old look and feel of the user interface, this is to hard to SEE, READ, and FOCUS on when your trying to do actual production work in Photoshop for 8 - 10 hrs a day. I’ve been using photoshop for many years and have seen a few things you have changed along the way that I might not have agreed with but this is COMPLETELY STUPID and UNuser friendly!

NEVER been so DISAPPOINTED in an update as this Photoshop cc2015.1

This is a total DOWN grade not a upgrade!

This issue needs to be fixed!

This was unnecessary and UNuser friendly!

This is a total DOWN grade not a upgrade!

This reply was created from a merged topic originally titled Dark grey on dark grey is an awful UI.

The new input interfaces are unbelievably bad. The preferences dialog, character styles, basically anything with a form input is now much harder to use. Dark grey elements on dark grey backgrounds are indistinct, low contrast, hard to find, hard to focus on, and hard to read. I can't move through the UI nearly as fast as I used to; now I have to directly focus on everything I want to interact with rather than using peripheral vision to quickly find high-contrast click targets.

Adobe has made a lot of bad UI decisions over the years, but this one is so fundamentally off-base that it's shocking. Who approved this? I imagine it was quite an internal debate, and the wrong people won.

Please let me change all the buttons, checkboxes, and text inputs back to REAL, STANDARD UI elements. I'm no UI traditionalist, but using contrast to highlight interactable elements is a fundamental aspect of usable visual interfaces. 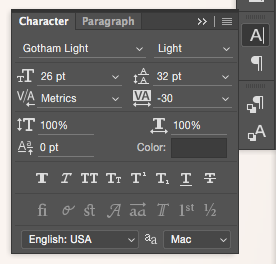 You can change the color stops of your UI in Photoshop by going to Preferences > Interface and choosing one of the four color stops under Appearance at the top of the dialog. 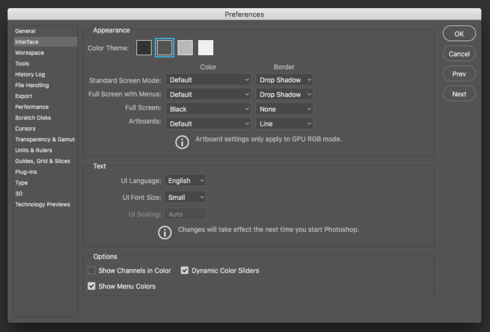 Thank you for demonstrating firsthand the complete and fundamental lack of understanding on Adobe's part that we've all been talking about.

The new user interface cc2015.1, has no shape or dimension, no defining separation between areas, It’s FLAT almost monotone in color.

You need to go back and LOOK how it was in the old version.

Call up both versions of photoshop and put the old user interface on 1 monitor and the new user interface on a 2nd monitor side by side and look at them and ask yourself which one is easier to look at and decipher, and comfortable on the eyes.

Never forget: black text against white background is easiest and by far. A dark background is not a good idea. Pale gray text on white is awful. Even companies that know much more about UI, like Apple, have made mistakes resembling this one somewhat, but have come back to more useable interfaces. You're going to treat pains to avoid the Mac interface and the result is a pity.

Most of us love to use Photoshop CC. Please don't make it downright impossible for us. Remember Quark, they didn't bother about users and they went down the drain.

Better brace yourself: our complaints will never go away. It's not a matter of getter used to change, it's a matter of refusing a bad UI. Quite stubborn we are.

I am looking for an alternative to Photoshop. If I find one, I will certainly make the jump. Don't make the mistake of thinking that you are irreplaceable.

I am experimenting with Affinity Photo and Affinity Designer. They both seem to have most of what we need from Photoshop and Illustrator. The problem for me is I have 25 years of using Photoshop and those 'crunch time' reflexes take a long time to retrain in a new piece of software. Adobe knows this. They also know that by controlling .pdf.psd and .ai, they can keep us locked into their never-ending game. What I wish they would recognize is that even young, new designers and creatives dont have time to constantly change how they interact with a software system. This is about their business of controlling and owning the document and imaging universe, first. Their products are relied on by governments and major organizations, but like all revolutions, at some point the game will change. As creatives, we just need to stay open and keep learning new things, even if the UI is counter-intuitive and maddenly dumbed-down.

David, you're not understanding what he's saying. The Color theme doesn't do anything.

All affordance is gone. The background of the dropdown boxes and input fields is the same color as the background of the UI panel itself and there are no borders separating the area distinguishing what can and cannot be clicked on. There is no identifiable target area to click on, it's literal guess work. This is just one specific example but the entire UI revamp is bad across the board. I know you guys track metrics, had a "classic" UI mode been included, you would see that, even among users who have never used Photoshop before, Classic UI would be the preferred option, because at least it isn't broken.

This is objectively bad design. Ignoring that aesthetically it looks bad, it's just plain not functional.

Great job Adobe!
Now I have a tiny User Interface (HiDPI not fully supported yet) with a modern ugly flat design. Great!