Hi,
there is transform inconsistency in PS2019

With the 20.0.5 update, there is now a user facing preference under Preferences > General... and check "Use Legacy Free Transform" 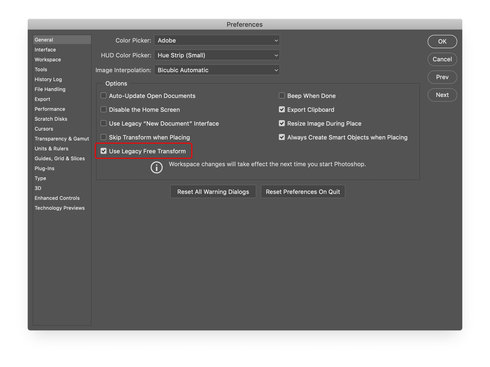 Use this preference instead of the PSUserConfig.txt method.

There are also different kind of layers in a group, crop area, selection and path, you may see how work.

This reply was created from a merged topic originally titled Inconsistent Constrain Behavior.

The new constrained-by-default change might make logical sense but conflicts with years of muscle memory. I would like to disable it if possible. But even more problematic is the fact that it does not behave consistently depending on what you're transforming:

I understand there might be some technical issue why text cannot be distorted unless converted to a Smart Object first, but besides that the Free Transform function should work consistently across the board and ideally, be able to be disabled for those of used to the old way. Sure, one might proportionally transform things more often than disproportionally transform them, but the Shift and Option key muscle memory is still in full effect.

I have to kindly disagree that it's logical sense.

If it were, dozens of programs would not have adopted that behavior for 2 decades.
It is intuitive to do things (draw) freehand and use a modifier to control it.
It is the way life is.

That's best point I have read! Naturally (outside of computer) we draw without additional tools, but when we want straight line we use modifier ie. ruler (shift)! Can't someone agree with this?

This reply was created from a merged topic originally titled New transform scaling proportionally without shift for everything *except* vector....

So the new, CC 2019, version of Photoshop has introduced proportional scaling as default behaviour for transforms (where muscle memory ... and the other Adobe programs ... have taught us all for year that you should hold shift). The inconsistency across programs is annoying but not deal-breaking. Inexplicably though, it doesn't even carry over to scaling of vector layers ﻿within﻿ Photoshop.

At least have it be consistent within the program - and preferably make it a whole suite-wide thing if you really want to change it.

While I support many of the changes in Photoshop 20, Free Transform is the one that baffles me. It feels like it was changed by people who don't understand the tool.

To start, the tool is literally named Free Transform, and Adobe has just removed the Free part by default. Additionally, it does not align with any other Adobe application. Adobe claims this is to help new users, but it works directly against new users and seasoned users alike. It's not easy switching between Illustrator, InDesign, and Photoshop with Transform acting inconsistently.

Speaking of inconsistent, the tool itself works inconsistently. Type and pixels scale constrained. Vector and smart objects scale freely. This is entirely not intuitive. I understand where some people are coming from (Gasp, why would you ever scale pixel or type any other way?), but there are many of us that do. (Oh don't look at me that way! I scale unconstrained a lot while digitally painting!)

Thirdly, give the user some agency (we're really not dumb). If this has to change, then give us an option to choose the default behavior WITHIN the app and make it consistent. Either constrain all or free transform all.

And before someone says there is a solution to this, creating a text file and placing it in the settings folder is a bandaid, not a solution.

This reply was created from a merged topic originally titled Transform with constrained proportions not consistent between objects and shapes.

I have adapted well enough to the latest Photoshop update that ensures the proportions of an object (smart object, pixels, etc.) are constrained by moving a transform handle WITHOUT holding the shift key. That makes sense to me, since, I would think you would usually not want to distort, say, an imported photo, logo, or other graphic. But I noticed that when I transform a shape this rule is not applied. Then I have to hold shift to constrain the proportions—as it was in previous versions—while transforming, which behavior I believe should be changed to make it consistent with the new feature.

Further, when I discovered this, I went to the control bar up top to click the link button (to constrain the proportions), which also didn't lock things for constraint. (Messing around with this on a non-shape object I now realize that link button isn't meant to lock the proportions apparently, it must only be there to lock them when one keys in a new percentage for scaling, but this did make me think that something could be done to rectify this overall issue in this area of the workspace too).

This reply was created from a merged topic originally titled smart object scales disproportionally in CC2019.

In CC 2019, you should be able to scale objects proportionally by default. However, this appears to not be the case with smart objects (they behave the same as legacy scaling). When rasterized, then it behaves as it should. It makes it incredibly confusing weather or not to hold shift when scaling various objects. I would appreciate it if it was consistent across the program, thanks!

This reply was created from a merged topic originally titled Transform.

Transform Tool - we used to press shift then transform to transform proportionally. then the control changed with the new update of photoshop, it wasnt necessary to hold shift in anymore. but the problem now is there is a real bug because sometime i have to still hold shift in then 5 minutes later i dont have to hold it in and thats how my day goes. very irritating. anyone else having the same issue?!

This reply was created from a merged topic originally titled Resizing image problem.

The latest update in Photoshop CC 2019 for PC has a problem with the resizing tool. Previously, as with all versions, I was able to use the rectangle tool to resize, hold shift, and use the mouse drag the image and it would resize proportionally. Now, it stretches. I am manually typing in scale percentages to keep it from stretching, but this is a problem.

The biggest problem with the current implementation of Photoshop's new shift behaviour is it's inconsistency.

I was slowly getting on board with the new method of proportional scaling, but seeing that smart objects and vectors still ask you to hold shift is mind boggling. Though I can understand the reasoning behind it (you usually don't want to distort pictures, but vectors might be okay), this is so unintuitive that I'd rather have one or the other.This should be an either/or situation, not a case by case use of the shift modifier depending on Photoshop's idea of when it's necessary.

Well, Illustrator still works the same way so I can guess that pasting or creating vectors within Photoshop get handled as they do in a vector program vs a pixel editing one. But, yes over the years, keyboard changes have been a pain. I started with Photoshop ver 1 back in 1991 and even after adding layers, which was a huge development, many keyboard shortcuts remained and did so for years. To change scaling behavior now is surely not a result of user testing?? Oh well.

I'd tend to agree with you about them having made some user testing before implementing it all, but the inconsistency is what really beats me. Most keyboard shortcuts are useful because they become muscle memory.

Another reason they might have added it is a lot of newer apps have favoured proportional scaling by default, probably because most of the time, we don't want to distort our images when scaling.

For basic layer, when I do (CTRL+T) manual transformation
>> To keep ratio I don't need press SHIFT.

For dynamic object, when I do CTRL+T, same
>> To keep ratio I need hold SHIFT.

It's reversed ! why ? It's confusing and annoying !

Seems rather than consistent behaviour (shift to keep ratio / no shift for free transform), they decided that shift should modify the native behaviour of a layer, ie smart objects maintain ratio by default and basic layers don't.

Does it seem counter intuitive? If so, that's because it is... hope they come around and fix it / offer some simple setting checkbox.

I LOVE the idea of not having to hold shift 24/7 (it's about time!), however it needs to be consistent. The current situation makes it difficult to know when to hold or not hold certain keys, resulting in unintended object skewing and user frustration.

What I notice, the operation is reversed when we modify a vector shape, but when we convert this form into a vector object, the modification rules via CTRL + T (Cmd + T) always respect the new operation!In all of this discussion, the problem is essentially, in my opinion, not necessarily a change, but that some people say that a vector shape is a vector layer, which makes me say this is that this vector shape, once converted to a dynamic object the transformation mode becomes the new one as described in the release notes!I think that in an upcoming update, the vector object transformation mode should follow the same logic as raster layers and other dynamic objects.