We are happy to announce the release of Photoshop CC 19.1.3.

This update includes fixes to some of the top customer reported issues among other bug fixes.

To update Photoshop CC to19.1.3, click "Update" in the Creative Cloud desktop app next to Photoshop CC.

Choose, check for updates from the Creative Cloud menu: https://helpx.adobe.com/creative-cloud/help/update-app.html

Sorry Jeff. Still having issues with windows 10 updates. Have addressed firewall and antivirus settings to let CC Desktop to allow full access. But yo no avail. Any other ideas. ? Many thanks for your time.

Thanks team, we really appreciate the hard work

Could you please link to the changelog?

Any news/update/fix on the slow print dialog issues?

We're working with our GPU driver partners on this issue.

3rd one I posted 10 days ago, so there was no enough time for fix in fact. But meantime I found other older theard on this and regular Adobe forum as well, where the same bug was reported 4 (5 for now) months earlier on November 1, 2017, so 2 weeks before version 19.0.1! That what I have read there is unacceptable, as however that was explained in few words it sounds that was intentional bug(?) and no workarounds offerend instead or reconsideration this behaviour entered rash damage :(


2nd one I posted exactly 3 weeks ago, so let's say that was too late to do something about, but when you read about it again it seems there is needed hardly little tweak to fix it, like one hour of work for engeneer (no kidding).


1st one I posted on February 28, 2018, so 12 days after 19.1.1 update, but only on regular Adobe forums I found exactly ten topics created and discussed by quite many users. Then I noticed also on this forum someone reported the same bug few days before me. This bug wasn't sorted out during next 2 weeks as 19.1.2 had the same problem. Well okey, fixing it seems to be more serious, so past 2, or even more than three weeks may not be enough, but with 19.1.2 version that was said the plan is to fix it for next update - so current one ;) There are already 15 topics on both forums about same bug with different kind of users looking for solution, while new comers fortunately don't create separate topics, but join existing ones.

I hope it will make more concern about bugs that like I'm saying came with 19.0 or some time later. Below are links to all 3 topics (by date):

These are in progress but didn't make the cutoff for this update. They are being worked on for a future update.

I'm still having issues -  with windows 10 updates. I have uninstalled and re-installed cc desktop which has not helped. I have a duel boat PC with windows 7 on all the latest updates have been applied.  please advise

Unfortunately, I don't get any updates in my Creative Cloud desktop app.
I clicked the Update option behind the triple dots many many times, but no updates will be shown. I'm still on Photoshop 19.1.0
Have anybody a solution to fix this issue? 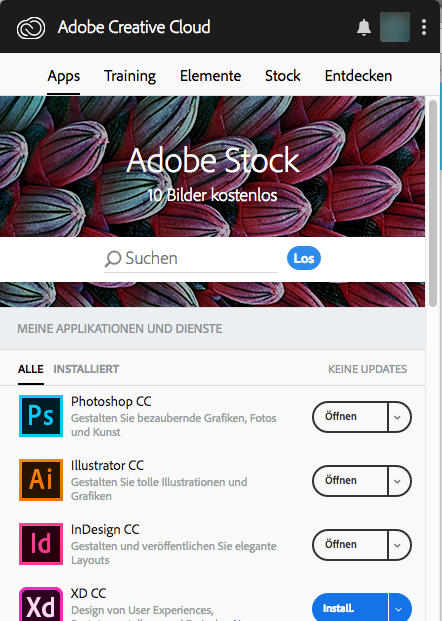 The only way I got some updates was to turn off my virus software in this case AVG, even though I added Cc desktop to the exceptions in AVG telling it not to block it.
On AVG I turned on to passive mode which turns it off to some degree. Then you have to reboot. Then found CC desktop showed some updates. But I only made it to the version you Have not the latest version! This kind of works. But not always. I need to check other things like fire walls etc but I have the same set up on windows 7 which is fully updated and have no issues on updates which only tells me there is something on windows-0 I do not understand.... this is stil on going. For anyone else can help then. Please. Do. :()

Your firewall may be blocking communication to servers and services needed for running Adobe software. See: https://helpx.adobe.com/in/enterprise/kb/network-endpoints.html

Thanks Jeffery looks interesting and I'll make note of for future. In the end I had you support remove some corrupt files. This solved the i issue.

Again. Thanks for your help.

Turning firewall and all other security stuff off, but I still don't get any updates with the creative cloud app. Uninstalled ... reboot ... re-installed the app ... no effect.

Hi. I turned off firewall on my router. Again no improvement to the updates. Interesting to learn it happens on Macs too. No response from Adobe. Apart from advice on installing though CC desktop. Yet.!!

Adobe, please provide a direct download link with new versions! Your CC app stuff doesn't work for a lot of people who bought your CC year by year.

Call support. They removed. Some corrupt files. Reinstalled cc desktop then everything worked.
Give it a go. Saves agro :)

ThIs would help get around the problem temporarily. I can install add on's from Adobe website and I get pop ups to confirm this on CC desktop. So I'm still in the dark about what's going on. Will try old YouTube to see if there are solutions as this issue goes way back.