I updated to 19.0.1 this morning, and everything is lovely with the exception of the Character palette. I'm suddenly unable to see increases or decreases made to any inputs in the Character palette via the up- and down-arrow keys in real time (only when I tab out of a field or hit Enter to commit the change does the actual type onscreen update). I'm able to make updates with arrow keys in other palettes (e.g. Paragraph). I should mention that I'm on a Macbook Pro (OS 10.13.1).

I am happy to announce that this issue should be resolved in the release of Photoshop that just went live, 19.1. Please open your Creative Cloud desktop app, update Photoshop and try it out!

i am using the german version. I do not see this configuration windows when updating. I want to ensure that is the version 19.1, but I can not see it on the Creative Cloud App. I am currently using 19.0 and when I select "other version", the latest one is 19.0.1.

When I click to the link "New", this is new: update for a function, which automatically select striking objects; support for high resolution monitors and more improvements and bug fixes.

"When I click to the link "New", this is new: update for a function, which automatically select striking objects; support for high resolution monitors and more improvements and bug fixes."

Those are all new for this release, so yep that's the one! :)

Currently experiencing the same problem. Text wont give a live update when changes are made, confirmed was working on 2017.

Sorry for the frustration. Thanks for the feedback - I'll submit this to our engineers to look into it.

What’s the timeline, please? Thank you

I'm interested in the ETA as well.  Migrating to an older version sounds like a pain and I'll deal with the annoyance if it's a week or two.  But not a month or two.

Being a publicly traded company we cannot share timelines, but if you look at the general pace between releases, that should give you a good idea.

Joe - as far as installing a different version, it's honestly really easy. I install and uninstall different versions on my machine frequently. I'll attach a couple of screenshots. Just open the Creative Cloud Desktop app and then follow these images. 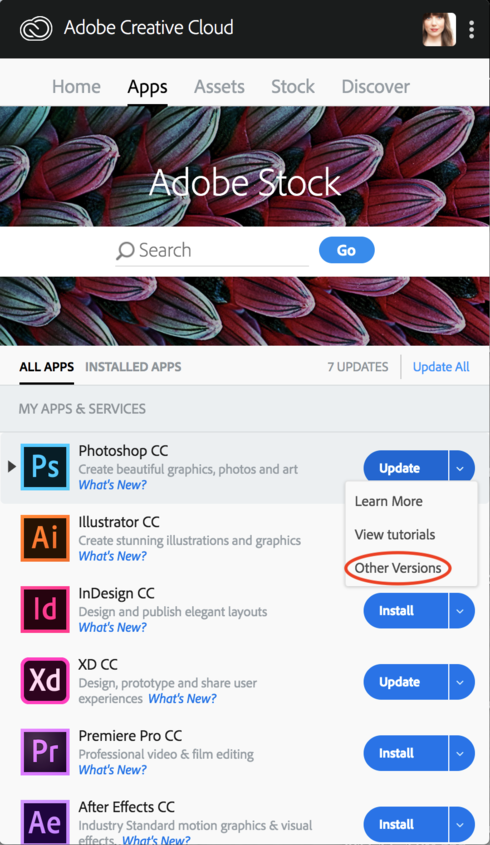 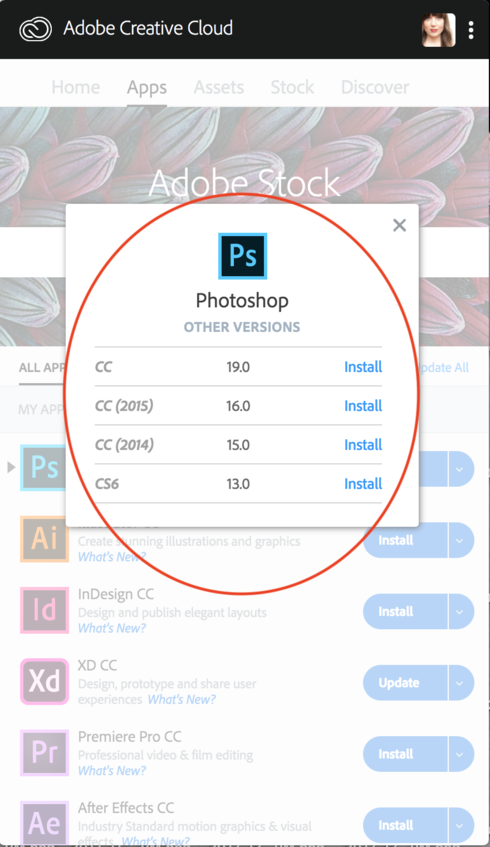 Howdy Jesse and everyone,

Yes, in order to get the fix out for leading with transformed type as soon as possible, we had to trade-off live updates to bumping (arrow keys) and scrubbing (mousing the control).  We are working on fixes to return the earlier behavior and they should ship with the next release to go out.  Our concern was including these fixes in a dot-release as they were untested and we wanted to get our customers the leading fix ASAP without breaking anything else.

I hope that makes sense.

Sorry for the annoyance,
David

This is a terrible "trade-off" and causing more of a disruption to my productivity than the leading issue. The work around for leading was to type values into the properties fields and tab to accept the value. So to solve that, you made it so essentially we have to manually set values and tab for all character properties instead of just leading? How does that make sense?

The fix will be in an update to the present photoshop 19.0 or in a new version of photoshop next year?

Due to the failure of a(n unrelated) widget control, Leading was effectively broken for many users.  Not all had the same experience, but many found it totally debilitating.  We wanted to get a fix out ASAP but recognized that the consequence would be to disable live updates for scrubbing and bumping, due to the limited time.  But once the control is confirmed, the layer(s) will update.  Limited live-updates certainly seems like a much better result than Leading going crazy or failing completely.

We're actively working on a complete fix and I can say that I was actually testing this today.  I cannot tell you when this fix will ship, but I can say that I see no reason for the next dot release NOT to include this fix.  That's as direct and transparent as we can legally be.

We're sorry that this impacted your workflow -- the goal was to make this better for the majority of users as quickly as possible.

This was a really bad trade.

I want to just post a bunch of swear words at the moment, David. The leading issue had a workaround. This issue does not. If I'm understanding correctly, not everyone had the Leading issue, but lots did, so the solution was to break something for everyone that has no workaround so some who were too "debilitated" to use a workaround could function?

It just doesn't make sense. I'd be more understanding and would respect the company's position if you said something like, we screwed up, then we screwed up again, but we're going to fix it right away. Not, we had a choice between two broken versions of our software and we chose to worst of the scenarios and hopefully you'll have a working version on the next dot release.

This is why nobody trusts updates anymore — a MAJOR FEATURE that any mid to high level designer would be using to adjust typography is non functional.

FYI - this "inconvenience" is costing people time and MONEY, all because of your carelessness.

THANK YOU. This is going on far too long....someone in management made a really bad decision. Won't be updating again for months after an update release. Learned my lesson!

It's been two weeks since the official response. Any news on when we can expect this fix? My workflow is really broken with 19.0.1...

It's been two weeks since the official response. Any news on when we can expect this fix? My workflow is really broken with 19.0.1...

Just revert back to CC 2017 - on the Adobe Creative cloud drop down under 'Apps' click and hold down on the little down facing chevron and choose "other versions".

It will install the old version back on your computer but you may lose settings (super annoying). But at least Photoshop will work again.

They should have never released 2018 in October, but you know — shipping software on the dates that upper management dictates is what's most important. ;)

Thank you. Jesus, what a nightmare.

I can't believe this... who releases an update that breaks such a key component of their software? I recently began paying for a subscription to Adobe's CC and I'm pissed. I thought an upgrade would make me more productive, not less. What morons. Please, Affinity, rescue us from the monster Adobe has become, in the same way Adobe once rescued us from Quark!

https://helpx.adobe.com/in/creative-cloud/help/download-install-app.html (scroll down to "install previous versions of apps")

To save your settings https://helpx.adobe.com/photoshop/using/preset-migration.html

I am at version 21.1.x and my scrubbies are not updating in real time unless I unclick  - it is very disruptive considering how it was working perfectly.  Why break this?  I hope this is fixed and soon - i have a class to do tonight and it's embarrassing to be talking about workarounds.

This reply was created from a merged topic originally titled Scroll for ALL Character options no longer real-time after bug update for the Lea....

There was previously an issue with the scroll and typing into the leading box for Character options. Looks like that was updated and the scroll works, but it is no longer real-time as you scroll for ANY of the options now. You have to scroll and apply it before seeing the outcome. Please update this asap!!! My workflow is being extremely hindered by this.

I'd suggest going back to Photoshop CC 2017 until this gets fixed completely, at least if you use text in Photoshop on a regular basis.

Oh, and a work-around for now is that you do get the previews if you're in a modal state (the text is uncommitted).

Can you explain this? Not sure what you mean by modal state. I am seeing no preview whether text is highlighted which is how I normally use it) or if just the layer is selected.

No, the live preview does NOT work even if text is uncommitted!

Hi David, thank you for your reply. You've said that there is a work around regarding the preview. but having part of the text or all of it selected means it's  in modal state. This is the actual worflow for everybody and this is exactely what doesn't work anymore. Not sure to understand the work around here.

After updating my Photoshop from 2017.1.2 to new Photoshop 19 my Text scubby sliders no longer give live updates to image.. I must release the mouse to see the font size changes. I uninstalled PS 19 and reinstalled 2017.1.2 and everything works..in old version..

This reply was created from a merged topic originally titled Leading adjustments has no live preview.

Since the last PS update, when adjusting the leading of text, there is no live preview of the adjustments.
So you have to enter each time you want to see the adjustment you made.

I'm having the same issue today (17/11/2017) - really hope this can be updated quickly, as it's becoming quite frustrating and time-consuming

Will we be alerted to this patch being fixed?

Currently trying to uninstall and role back to the previous version

When a user-reported bug is fixed, we do try to put out a message on any thread that mentions the bug.  So when the patch comes out, everyone who is following this thread should get a message.

Thanks and sorry for the hassle,
David

Same here. Wow, that is a really really annoying one. I use Windows 10. So not only Mac users have this issue.

If it possible, please send us the file we need to overwrite as a workaround until you publish the new update?

HI Denny, I also use Windows 10. I've not installed the new PS yet, still using 2017. I've been on the road for 5 weeks and have been following all the bug reporting, so arriving back home have not decided to install the new version on my desktop. What I want to know as you're a Windows user as well, do you have other issues with the new version?

Hi Rosa, here we meet again ;-)
Currently I have no other bugs / issues found on version 19.0.1, only this text sizing issue.
So I think, you can unscrupulousy install the version 19.0(.0).
With the "Creative Cloud" app you can manually choose and a another version to install. But carefully: I just found out, that installing a previous version will delete all the settings.

I had to uninstall Photoshop using the Creative Cloud panel... then I had to also uninstall it from my windows computer itself as well - then back in the Creative Cloud panel, I think if you either right click to install, or click the arrow to expand the options, it gives you the option to “view other versions” and that’s where I could choose to go back and install the 2017 version (18.??)

I use text quite a lot in photoshop for work and even though it seems such a small bug, it quickly became highly annoying not having the “live preview” of your changes - I have been a graphic designer for quite a few years now but I’m not THAT good to know exactly which point size I would need first time

Amazing how losing such a small feature can be completely debilitating...   We all use that up/down 'nudge' capability - while focusing intently on the space that needs filling :-)