Just like you can add a brightness filter on top of a layer, you should be able to create an effect filter which acts on the objects under it. Blur / sharpen would be particularly useful.

This is a tough nut to crack (performance, usability wise):

The Secret Life of Smart Filters

Probably never going to happen - the performance impact is much bigger than you think, and gets worse with multiple "filter layers".
Adjustment layers only work well because they don't have a support region (area) to adjust -- they can work on a single pixel at a time.

Why shouldn't I be able to non-destructively blur a shape, as though it's a smart object? It would be great if I could apply effects to shapes/images etc without having to convert them into a smart object

This reply was created from a merged topic originally titled
Smart effects without smart objects.

You can do that with a smart object because it has an explicit update step, and you don't try to apply the filter "live" with each change to the child object. Without the explicit update step, the performance is horrid (we tried it once, and, well, there isn't enough profanity to describe how bad it was).

Think about this: when you change one pixel under an adjustment layer, we have to update just that one pixel to recomposite the image. And that count doesn't change even with a large number of adjustment layers.
When you change one pixel under a radius 2.0 gaussian blur, we have to update about 300 pixels to recomposite the image. And that number grows geometrically with each added filter and it's support area -- and it would get insane with filters that do large warping (radial blur, distort, twirl, etc.). You could literally change one pixel and have to re-run every filter on the entire image area.

it is possible in After effects with multiple layers as well. Why not in photohop?

That's a nice resolution that pretty much nobody would be working to; what is the use case for working on a single file that size?I've been using PS for over 20 years and can't think of many occasions I've had to go beyond AE's 30k pixel limit let alone 300k! Maybe implement AE style adjustment layers in PS with the same pixel limits?

That makes total sense to me. Perhaps the solution is a "render" button. So when you change something it gets reset to low fidelity until you hit render. Similar to how you handle 3D objects.

We have that - it's called "save" on a smart object.

Even low quality would be prohibitive for a live preview using adjustment style filter layers.

I've been working a lot in After Effects recently and have become very comfortable with using Adjustement Layers to add effects. I enjoy using Adjustment Layers in Photoshop, too, but yet they're not the same as in AE.

Now what would be really cool to see in a future version of Photoshop:
The ability to apply Smart Filters (e.g. blur) as Adjustment Layers kind of like in AE!

This would be way more handy than having to handle multiple Smart Objects.

This reply was created from a merged topic originally titled
Photoshop: Filters as Adjustment Layers.

Ah, someone has made this suggestion before.

Well, I see you're saying that it's not possible because performance would break down if filters were to be applied as adjustment layers.

But then again think of how well After Effects can handle the very same task. Even with more than one effect on each adjustment layer. I did read the article from the first comment, but please remember CS1 was released almost 9 years ago... I think the cicrcumstances are different nowadays!

I know that you people at Adobe can do it! Smart Objects are good. But in many cases not really what I want. Projects can get uncomfortably complex. I'd really love to see this happening. And I think there are many out there who think the same way.

Remember, After Effects is dealing with images that are generally much smaller. HD video is 1920×1080px in dimension - an image size that readily fits on native monitors, thus fits in the GPU's memory space. Photoshop documents can be much, much larger 300,000 by 300,000 pixels. It's non-trivial to make the same effects apply to images that an order of magnitude larger.

And only some After Effects "effects" are live like adjustment layers - most turn off the effect when you work below the effect.

@Chris: I know. To me, there's nothing wrong with that. Works fine for me in AE, why wouldn't it in PS?

I have a new idea how this could work out... (I'm not a programmer, so I might be wrong about this):

What if behind the GUI surface, Photoshop would be creating a smart object from all the layers below the new adjustment layer, but we can still see the separate layers of the smart object within the same project underneath the adjustment layer. So technically it would still be the same as it is today, but from a user perspective it would seem to work the same way as in AE. I think that would be a useful improvement to the workflow and yet you would get rid of the problems that come with "real" adjustment layers for filters.

It still could not allow live updating of the filter effects, and would still require either turning off filters while you worked below them, or an explicit update step and recalculation of the filters -- basically the same as what you have today.

Also, it would bloat your files, use more memory, and cause more than a few problems because you're using a heavyweight abstraction for what could be each and every layer.

No, that's not going to work.

Convert the layer to a smart object.
Then apply blur to it. Now you can adjust / remove the applied blur @ what ever point of time unless you merge the layer. 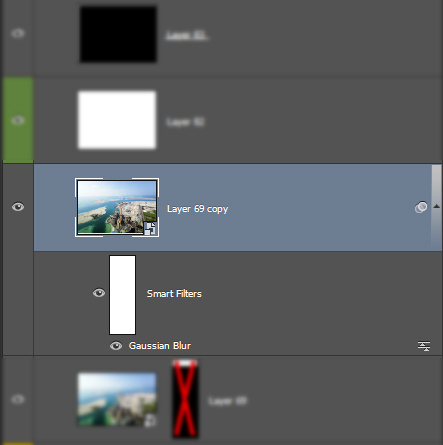 This reply was created from a merged topic originally titled IDEA/NEED - Blur Adjustments layers or folder.

The Blur effect on adjustment layers will be very usefull for standard and uncommon projects.
I'm working on a project and I have to emulate a special print process on fabrics before and after the wash.
I have to work on around 200 layer and have the possibility to create with adjustment layers the emulation of final product after the wash (i need to hide and show effects). I have a loot of elements in my preset for emulate the wash, but the GAUSSIAN BLUR is probably the last piece I need for create the perfect emulation.
it is not possible to do that with all the single layers or with smart objects, because I mostly require something like a folder where I put my effects for temporary influence all the layers below (like normal adjustment layers of photoshop or after effects) and I will show and hide when i need.

Could be a great idea give the possibility to add blur in adjustment layers or Add effects to folders, like the bleeding options

This would match how Adjustment Layers work in After Effects.  If there's a way to make it happen, it would be amazing.

I would like to point out, that Affinity Photo has this feature. Only for a few select filters though (that are fast to render). But just having a basic blur goes a long way.With the GPU acceleration of today, this is doable. Even though, sure, if you add 50 of them, and you have a 30000x30000 image, then things will nautrally be slow. But many things in Photoshop gets slow at a very large sizes (like brushes) - doesn't mean they shouldn't be an option at all. :)