So if I want my canvas to be 43px smaller I can basically type 160-43. Or if I want it to be 2.5x bigger I can do 160x2.5.
Any number field can benefit from this. Very often I have to open the calculator to figure out numbers.

Note - you can do simple math in the Design Space interface of Photoshop: https://helpx.adobe.com/photoshop/usi...

A good step forward. Perhaps you do manage to get into the Classic view of Photoshop. :-)

Or "Why simplify things when they can be so complicated?" We (all here) did not require that you create a Space Design (need to activate and requires 64-bit Windows 8.1 or later (PC) and Mac OS X 10.10 (Mac)), but to implement a function longstanding other software like Illustrator or InDesign.
It was still much easier to implement a function that exists in Illustrator or InDesign, create Design Space that, right?
Each version of Photoshop, you add functions that personally I do not use and I do not see the point (eg 3D). As against simple features such as allowing to do simple operations in the fields number who Yet many to call and that for years ...
I'm not saying that all the features you add to Photoshop are useless, but for example you add the tool Work Plan (which somehow comes Illustrator) but still not do simple math in numbers fields?

This reply was created from a merged topic originally titled Having the ability to do operations where we enter numerical values.

(Excuse my English, I am French and I pass by Google translation. I hope you understand what I mean :-p)
For those who do not know, in Illustrator or InDesign, in the fields where you enter numeric values (such as height or width fields of an item), the four basic operations we can do.
For example, if you want an item to be 2 times higher, we will type * 2 after the height and validates it by pressing Enter. Same thing if you want to move it 10 pixels on the X axis, + 10 you type after the value in X and you confirm with the Enter key. If instead of hitting Enter, you Alt + Enter, it performs the transformation you while duplicating the item.

By cons, we still can not do it on Photoshop. This is unfortunate because it is handy.

I would love it if the Image Size and Canvas Size dialog accepted expressions. For instance, if an image width is 592, let me type in 592 * 2 instead of having me do the math to type in 1184.

This reply was created from a merged topic originally titled Ability to change the size of objects by using simple math operations in the Tran....

When you Ctrl + T a layer, it would be nice to use simple math operations to change the size.

Example: You have a rectangle that is 800px wide. But I want to change the rectangle to be a third of that size. Instead of making the math operation somewhere else, this could be done straight in Photoshop by introducing /3 after the width value. Illustrator and InDesign do this for a long time and it would be good to make Photoshop do it as well.

This reply was created from a merged topic originally titled Mathematical Expressions in Size input fields.

it should be included many time ego in CS6

Time to chime in here again. Although after 6 years this is really feeling like it's falling on deaf ears, or at least deeply entrenched intentionally obtuse ears (I'm talking to YOU, Chris Cox.)

This isn't a outrageous feature request, its a basic utilitarian feature present in EVERY SINGLE OTHER ADOBE APP.

It will be forgotten... for all previous version which have been left fot their reasson.

It's stupid that this has not been added after 6 years. I have the need for this almost every time I use Photoshop. I would even like to reference the width and height in the other field. E.g. :

i was wondering if exactly in your case doesn't help you just change the percentage value.

This reply was created from a merged topic originally titled [Bug] [Photoshop] Can't use calculations in image/canvas size.

Creatives are not able to use calculations when changing the canvas and/or image size of an image ... 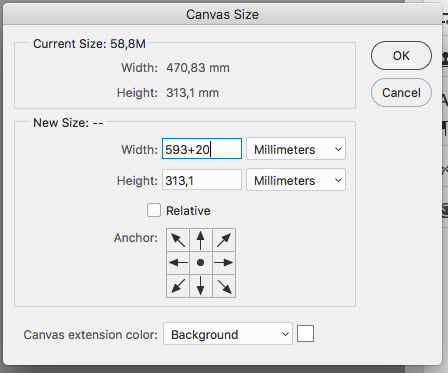 Wow thats an amazing new feature ! So great that I wonder why no one had thought of adding it before