Idea for improving ux when deleting a layer group or artboard.

When not using artboards, and every layer in a PSD is contained inside of a layer group, that layer group cannot be deleted. (bear with me) 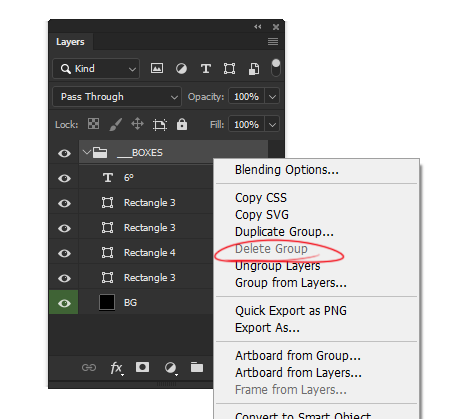 "Delete Group" is ghosted in the right-click context menu and in the main menu, under Layer.


Same goes for when you ARE using artboards - the last or only existing artboard cannot be deleted if it contains all layers or layer groups in the PSD.


Normally, when you delete a layer group or artboard, you get a popup like this:

All buttons are possible options when this popup appears.

When it's not applicable to delete a layer group or artboard containing ALL layers/layer groups, because apparently PSDs must always have at least one layer or layer group (even if empty), why not still allow the user to do what they want to do like they normally would and simply disable the "Group and Contents" option?

Rather than ignore users when they press their 'delete layer/layer group/artboard' keyboard shortcut
AND WORSE YET
force them to manually move the targeted layer group or artboard's contents out of it before deleting it is even a valid option.

Instead - either skip the popup and default to "Group Only" deletion behavior, OR show the popup but ghost "Group and Contents" since it's technically not a valid option.


Photoshop's current way of handling this scenario seems lazy.
This is an area in which user experience can be made more friendly and consistent.

What do the Adobe reps think?