While I support many of the changes in Photoshop 20, Free Transform is the one that baffles me. It feels like it was changed by people who don't understand the tool.

To start, the tool is literally named Free Transform, and Adobe has just removed the Free part by default. Additionally, it does not align with any other Adobe application. Adobe claims this is to help new users, but it works directly against new users and seasoned users alike. It's not easy switching between Illustrator, InDesign, and Photoshop with Transform acting inconsistently.

Speaking of inconsistent, the tool itself works inconsistently. Type and pixels scale constrained. Vector and smart objects scale freely. This is entirely not intuitive. I understand where some people are coming from (Gasp, why would you ever scale pixel or type any other way?), but there are many of us that do. (Oh don't look at me that way! I scale unconstrained a lot while digitally painting!)

Thirdly, give the user some agency (we're really not dumb). If this has to change, then give us an option to choose the default behavior WITHIN the app and make it consistent. Either constrain all or free transform all.

And before someone says there is a solution to this, creating a text file and placing it in the settings folder is a bandaid, not a solution.

What rubs me the wrong way is that there actually exists a text file that fixes it.Yet Adobe did not make the effort or take the time to incorporate it.Someone on the forums offered that tip.Perhaps when they make these groundbreaking changes, don't release them until it's intuitive for the users to choose whether to use them or not..

What rubs me the wrong way is that there actually exists a text file that fixes it.Yet Adobe did not make the effort or take the time to incorporate it.Someone on the forums offered that tip.

To be fair to Adobe... they've always had it listed on the "What's New" page of the Release Notes. 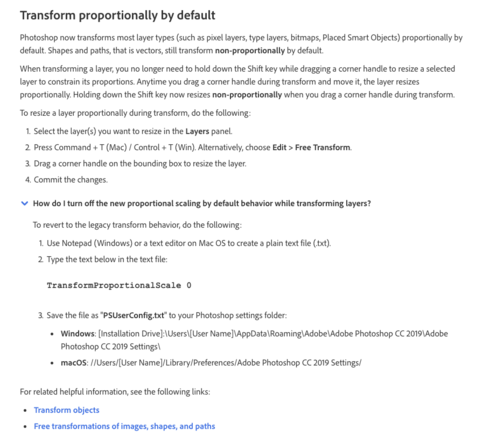 "the tool is literally named Free Transform"Hilarious.Another mistake from the people who threw away so many years of history by confusing the Lightroom brand name. Now Photoshop is under attack with bold new ideas that don't honour tradition or stability. Or sanity.

In this post, there is suggesting all kind of useful tricks for the photographers so that they can access such platforms in an efficient manner. They get other details from Epson error code 0xf1 that may guide in a proper direction.

Like so many others, Matthew did a great job of defining the problem. Too bad it is going to fall on deft ears.There is an old saying that goes something like this:For every person that expresses dissatisfaction with something, there are 100 more people that agree but say nothing.In most circles, what Adobe did would be defined as an unacceptable error to be immediately fixed.Adobe is like Kodak who swore for many years that they were the leader and knew exactly what they were doing. Then they filed bankruptcy!

Inconsistency of proportional scaling for all layer-types, lack of falling back to previous behavior or making the behavior the same for every layer type, plus this