"Blend If" – An awesome tool that could be even MORE AWESOME

If you couldn't tell, I love "Blend If," which hangs out in the Layer Style "Blending Options" box. But there are some things that I think could make it better, more powerful and/or easier to work with.

Level-up by 1:  Numerical inputs. Sometimes when working on tricky blends it would be super helpful to be able to key in a numerical value, rather than manipulating the existing sliders. Additionally, pressing the up and down arrows would change the numerical value by a single point. I feel like this would be a really easy thing to implement and would improve usability by quite a bit. It might look like this:

Level-up by 2: Contours or curves for blending the area between a split marker. As you know, you can [option]+click to split the marker, resulting in a nice fade for your blend. Currently, it's calculated like it's a linear curve from the left to right sides of the split marker: one end of the marker is 0%, the other 100% and the middle is at 50%.  Sometimes it would be nice for the blend to be calculated with a gamma curve or an S-curve. This would give me more control over the look of my blend. I envision this could utilize the existing Contours that exist elsewhere in Layer Styles, and might look like this:

Level-up by 3: Scrap the current "Blend If" method and make something completely grid based, using a path to plot in and out points. 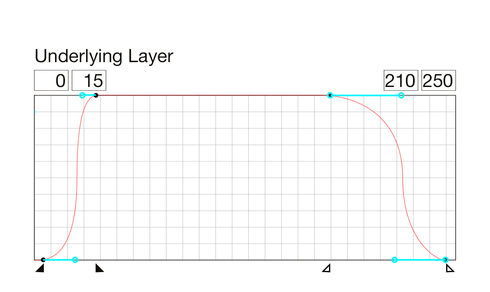 This one removes the now-redundant markers at the bottom and relies entirely on a path/grid system. Notice the emphasized midpoint, which would be useful to those of us who know some Lab tricks.

So that's what I have. What do you think?

I support ideas 1 and 2.  However I think #3 is too technical for the average userl.

I use this all the time... adding those would be easier then using the mouse and some keyboard shortcuts to separate them. Also, adding the curves options would be great addition. But it should be noted that it should be tested for more then a year before implementing into Photoshop. Do to changes from previous version. Example the hatted transform option which took some time to get Adobe to place a check box for legacy to reset transform tool back how it was. If they do that change to the IF sliders. Adobe should have the option under Preferences to go back to legacy mode for IF sliders if the “customers” do not like that option. It would cause less stress for the programmer and the customers.

More thoughts about the Contour/Curve option. I figure that an 8-bit file might not have enough color data to provide a smooth transition throughout the blend. My future-vision of this tool would be that you could use a contour or curve, but you'd have to know that best results would happen in 16 or 32 bit files. Much like using highpass+overlay,  frequency separation or EXR tools often do.