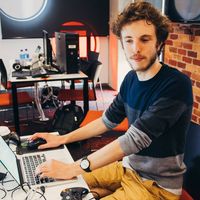 I noticed this while doing some reference testing in Photoshop to compare against my own resampling algorithm. It appears that when you repeatedly downsample then upsample an image using a filter like bilinear, the image will slowly shift towards the top-left of the canvas. When resampling like this I would of course expect the image to get blurrier, but probably not to shift around, particularly if the contents are perfectly symmetrical. It doesn't occur with nearest neighbour resampling, and seems to be related to the upsample not the downsample.It's quite easily reproducible (on Photoshop CC 20.0.2) by making a symmetrical image and using an action to repeatedly downsample then upsample to the original size:Here's a gif showing the above instructions, trying nearest neighbour first (which is fine), then showing bilinear.https://imgur.com/a/gKUZwuk(got a Bad Gateway error when trying to upload directly here)I found a similar issue reported on another image library, which has apparently since been fixed, suggesting it's indeed a bug in Photoshop and not just something inherent in the upsampling.https://github.com/python-pillow/Pillow/issues/986Not really a major deal since no-one is really doing this again and again, but suggests that maybe upsampled images are very slightly shifted, so could be worth looking into for "correctness" reasons :)Cheers,Geordie