When is adobe going to make photoshop elements compatible with the mac Photos Application.

Most other photo editors have already added extensions, so for example, a camera raw file opens as a raw file in their editor or a tiff opens as a tiff instead of every photo opening as a jpeg
from Photos into photoshop elements.

Affinity photo is an example of a photo editor with the relevant extensions.

Of course if everyone would just import their photos from camera or other places into the pse organizer, there would be no problem.

But as it stands now the mac defaults to using Photos and doesn't make it obvious you don't have to use photos or how to change it to something else like the elements organizer.

I know this has been asked about before, but really more than two years since mac Photos was announced and still no extension from a huge company like adobe? 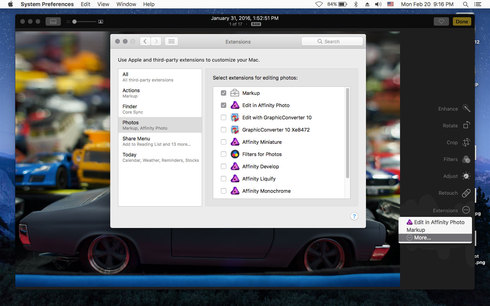 I am not a Mac user, but my understanding is that the problem is with Apple. They don't want external softwares to work with their own proprietary organizing software. After some time and a lot of complains, it seems there is a solution now for Lightroom, the organizer and other external tools:
http://99jon.blogspot.fr/2016/03/external-editing-from-photos-app-on-mac.html

If Apple does not want, I could understand that Adobe stays away from fiddling with Mac extensions.

Was that way at first, but apple opened Photos to third party extensions quite awhile ago.

Many third party software developers supply extensions for Photos like the screenshot above showing some supplied with Affinity Photo.

I agree with Michel, Adobe is Apples biggest competitor in post processing.  With the introduction of the new Mac Phones next year and higher than ever camera processing capabilities, it would be foolish for Apple to risk losing any of its customer base. The consumer shooter market is dying off at a record pace being replaced by phones which are growing the segment.  It will freeze in H*ll before Apple partners with Adobe especially on a lower margin product like Elements.

All that said ON "COMPETITION" my experience on MacBookPro with Elements 14 is VERY bad, I don't care where it originates from, but as a customer I have paid $$ for boths and expect at least stability and not so many hangs & crashes of Elements! Again....Adobe seems too arrogant to even respond on this forum and their helpdesk is not able and not responsive to resolve.
Nver will I buy any Elements upgrade before I get garantee it works with Apple osx
And btw, before anyone suggests to contact the retailer,  I purchased my Elements 14 directly from Adobe through the internet, A also keeps suggesting me through marketing mails to purchase Elements 15 @ substancial cost, NO WAY

Still no progress on this in photoshop elements 2019.

Still no progress on this in photoshop elements 2019.