I bought this program several weeks ago and cannot use it due to it popping up saying not enough ram   Tried several techniques from you tube, to no avail.

Perhaps if you told us how much RAM you do have, along with what OS you're using and what you're trying to do, one of our Premiere Elements users will be able to help you. Video programs do tend to be RAM intensive, although Premiere Elements is often more accommodating.

I should add that a lot of programs today also make use of the RAM on your video card. I don't know about Premiere Elements, but if you could say what video card you're using and how much VRAM it has, that would also help. Your System info should have the information if you don't know it offhand. 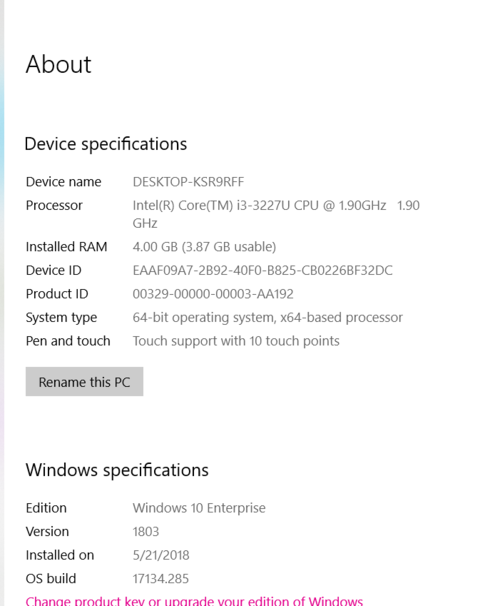 I'm just trying to edit photos. It won't let me do anything, says I don't have enough memory

Are you using Photoshop Elements or Premiere Elements? Just to clarify since you say you're editing photos, which is usually something you'd do in Photoshop Elements. Not that it makes a difference that I can see as the  specifications appear to be nearly identical, including the 4GB RAM.  You bought it several weeks ago and it's never worked? I wonder if you might have a faulty installation, assuming that there's no hardware problem and your RAM is good. I'm afraid I don't know much about Windows, but I've certainly read that there can also be problems specific to each version of Windows 10. But something like this is a bit too big to have never been mentioned before. I'm going to have to leave it to Adobe Staff or an Elements guru to pick up on this, but if you feel comfortable doing so, you might try uninstalling and reinstalling while you wait. Since Elements isn't part of the Creative Cloud, which makes that an easy process, I don't exactly want to recommend you try a procedure I'm not at all familiar with. I would think it was relatively straightforward, but I couldn't promise that.https://helpx.adobe.com/photoshop-elements/kb/uninstall-premiere-elements-photoshop-elements.htmlThis is a start to finding the information you need for this, but it doesn't discuss activation very thoroughly, only saying that activation is deleted from the computer automatically, so you ought to be able to go through the reinstall and reactivation process easily. But try this only if you feel comfortable doing so. Otherwise, Adobe staff and volunteer Elements gurus are here quite often, if you don't mind waiting for help.

It's Elements and it loads up just fine and I can download a photo but when I try to make any edits or save the image it says I don't have enough memory. If I go into preferences and then performance it says my integers are wrong. 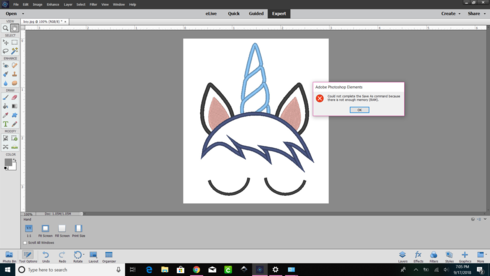 Oh, I'm pretty sure I've heard of that Windows bug. Thank you for providing a screenshot. They're very helpful when trying to figure out what's wrong. And yes, this is Photoshop Elements.  Here's a link to the problem. I don't know if it's been resolved yet, but this is a start on understanding the problem. This link was posted 4 months ago:https://helpx.adobe.com/photoshop-elements/kb/integer-50-8-required-closest-value-inserted-photoshop...One of the popups listed on the page was yours.

https://feedback.photoshop.com/photoshop_family/topics/elements-14-editor-not-starting-since-windows...Here's the link to the link. Maybe when I copied it, some part of it got cut off. These are long links and they're pretty obviously not showing everything. If this, too, is Page Not Found, try a search on Feedback here using "Windows, not enough RAM" and this should pop up about Elements 14 not starting since an update. The link is to the resource is in the second message, I believe.

4GB is really not enough RAM for Windows 10, let alone photo editing on top of that. I STRONGLY suggest installing more physical memory in that computer.

I agree, 4 GB is a bare minimum. However, in my experience, you should not meet error messages for not enough memory, the risk is that the software will run very slow.

While the editor and organizer require less memory than Photoshop or LR, you'll need more in the following cases:
- if you shoot raw
- if you use automatic features like face recognition or smart tagging
- with some filters, especially the new ones.

I am happy with 8 GB on this medium spec computer, and with 6 GB on a second low spec computer, I still can live with it. Ironically, the RAM bug did hit configs with 16 GB+ before the Win 10 update!

Bare minimum??? It is about half that is needed just to run Windows 10! Six gigs means that somebody added a mismatched piece of RAM into a PC that started out with four gigs...

It is possible that the motherboard and BIOS on that PC may not support more RAM. There is a website where you can have it check your computer and give you all that information at no charge. It is memorystock.com. You would need to go to that site with the PC for which you need the information.  Also, if the PC is that old and is a convert to Windows 10, it is most likely that the graphics circuit on the motherboard cannot get along with Photoshop as well.

While I'm strongly in agreement that 4GB is really not enough RAM, Adobe has always been pretty careful about their minimum requirements. Almost everybody I know who has PSE has tried to get away with the minimum and been able to save files. It's possible she is trying to save very large, heavily layered files,  that she is poorly configured, or that she has a hardware problem, but it's also possible there's a problem with Windows and PSE, as that link I posted would indicate could be the case.I think it would be helpful if someone from Adobe could help her eliminate the possible suspects, or confirm that the minimum RAM requirements are too minimum for her with her OS and whatever it is she's trying to do.In general, of course, installing more RAM, if her computer allows her to, would be beneficial in any case going forward.

I will try adding more RAM but I wish I would have known this before purchasing the program.

Even if you add more ram, that won't fix your issue.You need to do the registry fix as explained above.https://helpx.adobe.com/photoshop-elements/kb/integer-50-8-required-closest-value-inserted-photoshop...

Did you not check the Minimum Requirements before purchase?

Frustrating. Did you try restarting your computer after going through those steps?

If so, can you save ﻿any﻿ file? Even a very small file with only a white background? If you can't  save something that basic, then it still sounds like there's something going on that's in your system trying to work together with Adobe and failing, or in how your system is configured. I can't guess for Windows, but I'm sure someone here can.

Here are some directions that might be easier to follow for editing the registry courtesy of  ssprengel https://forums.adobe.com/thread/2423579

Navigate to the Photoshop Elements Key under HKEY_CURRENT_USER and click on the version number of Elements you're using where 16.0 is PSE 2018:

Right-click in a blank area over at the right and enter in a new DWORD 32-bit Value named OverridePhysicalMemoryMB:

Enter in a Decimal value of 8000 for the new Value you just created:

I've done this a million times.  Still says I don't have enough ram

If in the photoshop elements editor you go to Edit>Preferences>Performance, can you post a screenshot of what you see?

I've done this a million times.  Still says I don't have enough ram

I totally believe you have done it many times. But in the troubleshooting process, it's necessary to check what has been the result of that editing.
Not millions, but certainly more than one thousand users have done the registry edit successfully. Some have failed and reported. From those, nearly all had incorrectly applied the edit. When guided to do that correctly, they reported success (I believe perhaps 20 or so reports in the Elements user to user forum).

So if you can post here the first 15 lines of the menu Help >> System Information of the editor, or a screnshot like the last one of the registry by JEA, we could know for sure.

The other screenshot required by JEA will also be very useful.

Why not send her a .reg file instead of posting the manual fix?

Adobe should have made one available a while ago.

Because they could be held liable if something goes wrong? Or because they expected to have a real dot update "fix" sooner?

Why not send her a .reg file instead of posting the manual fix?

So, you believe a standard .reg file would work in all computers?

You only need that one specific key value in the file.

Thanks for the information. Learning something new everyday.
Now, I have immediately two following questions:

1- the.reg file must be different for each user (they have different amounts of physical memory).

2 - Does it look easier and safer than direct registry edit? Even the task to backup the registry before the edit seems more difficult for most Elements users than the simple steps done in two minutes. (I would use my CCleaner for that task.)

Much safer than directly editing the registry. Adobe could easily write a script/VB.net wrapper to determine installed RAM and write that value into the file.

I use two computers at home (Macs but that doesn't matter for this example), one with 20GB and the other had 6GB until recently because a RAM chip went bad. Neither of those amounts is cited in the Help article linked above. What happens if the user enters the wrong amount in that key?

What happens if the user enters the wrong amount in that key?

Nothing bad.
Nothing good.

Don't forget that we are speaking about an issue:
- that has a similar solution both in Photoshop and Elements (last versions)
- that does not appear to ALL of the Elements users
- that has triggered hundreds of posts in this and other Adobe users to users forums, with mostly successful feedback for the workaround. That means thousands of victims. From the unsuccessful ones, no proven catastrophes. When checked, the unsuccesful ones had huge errors, mainly 4 instead of 4 000 as decimal value. Re-editing solves the issue.

Other common related issues:
- assigning 100% of the RAM for Elements in the preferences instead of the default 70%
- bad settings for scratch disks
- use of very small SSDs
- very odd: the problem appeared years before the Win update for very strong configs with lots of RAM and the workaround seems to have also solved the issue.

If you have Elements on Windows (you can download a trial version for 30 days), it's easy to test what happens with wrong decimal RAM entries. 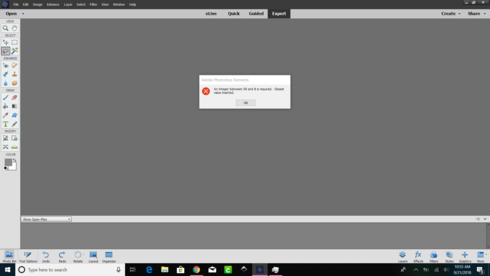 Your posting says you only allocated 8 MEGABYTES for Photoshop...

To follow some of the guidelines by which you can also get the knowledge to maintain the system updated from the help of the Canon printer tech support for the knowledge which you may be known for the use of the system.

Fortunately this registry entry doesn't seem to do any harm to the os if not done correctly.Adobe should issue an update for photoshop elements 2018 like they did for photoshop cc 2018 to fix or "patch" the ram issue.That adobe expects users with a current version photoshop elements 2018 to fix it them selves is very unprofessional from a company with the resources adobe has and one could say that adobe is selling software not fit for purpose, since this bug actually prevents users from using the software.Adobe already proved they can patch the software to deal with the issue by patching photoshop, which elements shares the same code base with.No where on the purchase page is a warning that says if you buy this software and have windows 10 you may have to modify the windows registry to get the software to actually work as advertised.