People are increasingly using their iOS devices with external monitors, especially the iPad. At this point the iPad Pro (2018 and 2020) supports output at 4K/60hz. As we all know, any iOS device will only display a screen mirror via wired or wireless Airplay, but there are important exceptions for 16:9 and 3:2 content. The first example is the in-built Photos app. Select any 16:9 video or 3:2 photo and the image on the TV or external monitor immediately snaps to its full resolution in native aspect ratio and effectively becomes and extended display (no dock, etc.). The other example of this is from a popular third-party video editing app called LumaFusion (see below attachment photo). Using the Airplay API, on both wired and wireless connections, they allow a full screen, native-aspect ratio projection of the video while keeping all editing controls and the iOS environment as they are on the iPad screen. Again, that’s leveraging Airplay to effectively have a 4k extended display for the purposes of video editing. Lightroom should offer the same for photo editing.

For Lightroom mobile on iOS, instead of just seeing a screen mirror when connected to an external monitor, it would be phenomenal to have a 4k, 3:2 image of the current photo sent to the external monitor. This would be easy to integrate — if a mom and pop size operation like LumaTouch can figure out the Airplay API then surely Adobe can — and would require no changes to the UI of the Lr app beyond a little airplay icon button in the top right row. Keep everything the same on the iPad, e.g. keep the native 4:3 UI as it is and let users zoom in to make fine adjustments on their iOS screen as normal. That all stays the same. But at the same time as we’re zooming in and out and making adjustments, let us use wired or wireless Airplay to broadcast the full screen, native aspect ratio image to an external monitor to take in the big picture as we work. Not just editing, it would also be perfect for presenting photos from a prepared album to a TV or monitor directly from the Lightroom app. I could see myself using that regularly. More people spending more time in Lr is a good thing. 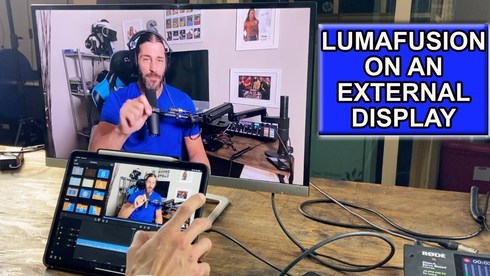 I think it's amazing what LumaTouch have done with such a small operation. They have showed the big boys how a slick app with cutting edge performance and features should be. Adobe and other large companies, should take a leaf out of their book.

I'd love to see external monitor support LR iOS. Although crazy as it is, LR CC (desktop) only currently supports a single display!