Hi all,
I see that one is only able to import one image at a time from the files app on ios11. For this to be of any use, we need an either select all of multiple select feature on import like you get with camera roll import.
Does anybody know if Adobe and Apple are addressing this? Really important if you want to use your mobile device as a start to finish editing tool for large image numbers. Serious game changer for those using products like the Gnarbox backup device which now is accessible in the files app location folder.
Cheers thanks

You can select as many as you like. Click on the 3 dots at the top right hand corner.

Thanks Dave, I believe I’m up to date with my apps, but when I select the three dots, then add photos, then files, once you get to the folder you prefer, it only allows one image to import at a time. There is no select all feature.
Cheers,

Just curious, why not shoot in LR mobile?

Thanks John, forgive me if I’m not following correctly, I presume you are referring to shooting with your mobile device through Lightroom?

I hoping to make my iPad Pro 12.9, my on location editing solution for work, so I’m shooting RAW and copying into either photos or ‘on My ipad’ In the files app with either my SD reader or my Gnarbox wireless. So I’m looking to import and entire job of RAW images into LR mobile. The reason why this is important, is that I often have to complete and handover to my client on location, so the cloud is of no use for these scenarios and would have to resort back to my laptop, which I’m hoping to move away from.

This is not major, but I would really like to have access to my wireless hard drive or folders in the files app, instead of camera roll. Apple hasn’t even integrated photos into the files app, which is crazy.

Ah ok! I thought you were referring to shooting with the mobile device. I understand now! Sorry for the confusion.

Your workflow is the same as mine. I mostly shoot with a 5D4 and import them to my ipad from a SD card.
I think what you are missing is clicking the 3 dots in the window that shows your camera roll, not the 3 dots in the collections/Albums window
You should see a blue bar at the top. click the three dots to the right of that and you get the option to select as many shots as you want.

Ah, sorry, i just re read your question. so, from the files app it doesn't seem possible unless maybe you can drag and drop? I can see the option to import from files but it does seem to only do one at a time, even if you select multiple files.
My raw files always get imported to the Photos app, i dont really use the files app much as it seems quite restricted.

I also didin't really pay much attention to the files app, but what it allows you to do besides creating folders on the iPad separate from photos, it allows me to connect to my hard drive wirelessly and as soon as my wireless hard (Gnarbox) is connected, it appears in the locations folder on the left in the files app, allowing my iPad to look through all my folders on the drive and import directly into Lightroom mobile without having to make a second copy on my iPad, like in the photo app.

So in my opinion, this is a game changer and I have already seen other apps like lumafusion creating folders thats appear in the files app, that you can directly save presets or LUTS to, or even video content, then opening the app and they are all available without importing, like a laptop filing system.

Im hoping Lightroom does the same, where its got folders on your iPad in the files, like presets, that you can just drop presets into, that are then available in the app when you open it.

Ive attached three images
lf1 - showing you the Gnarbox folder in locations, which gives direct access to the drive from lightroom. Apps like dropbox are there and in future all your apps will have a folder for direct access.

lf2 - showing you the "on my iPad" folder where you can create your own folders and organise your files.

lf3 - lastly inside the Lumafusion folder in "on my iPad" where 4 folders have been automatically created allowing you to drop images and presets directly into the folders which then are immediately available in the app when you open it.

Just hope apple and adobe sort out the select all problem.
cheers 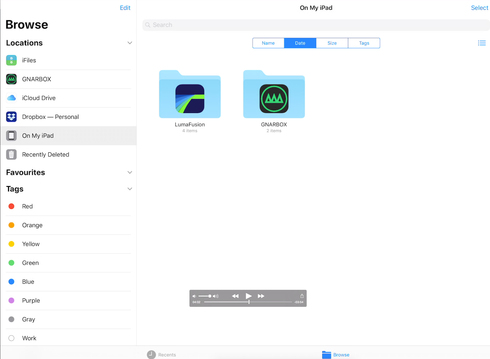 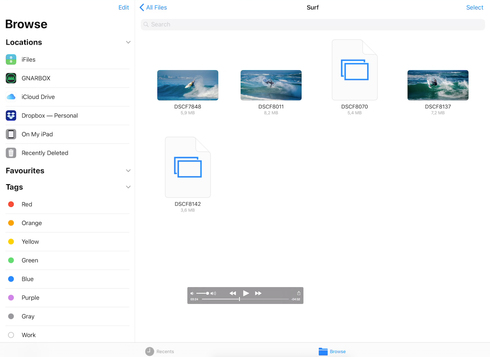 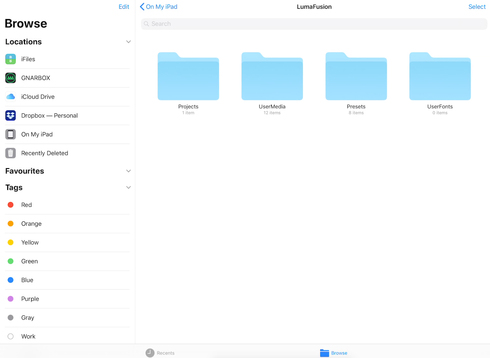 I can see how useful Files might be in the future, but in my case its so limited as to not be worth using. I do use an app called File Browser Pro which pretty much does the same thing, only better for me.
I too have seen other apps creating folders in it, but these are not apps id bother sharing data across.
When i import my raw files to the Photos app, and then import them in to LRM i can safely delete the files from the Photos app, and have LRM transfer them to my Desktop automatically. This way im not keeping two copies of the same image on my ipad/phone.

One BIG issue i have with Files is that it wont give me thumbnail previews from Goggle Drive. It works with Dropbox but for some reason not Google. This is both raw and JPG. Now i use Google much more than the other services so this is a big limitation for me.

Interesting you mention Lumafusion, as im very much tempted to get it, but thats for another thread.

Cheers Dave, thanks for the feedback, lets hope the app goes from strength to strength. My workflow is at present ver similar. I'll continue this way until a couple things get ironed out.

I don’t know if you’ve solved this problem, but it seems, now anyway, possible to import multiple photos from Files.

2. In Files, select Browse and navigate to the folder you want.

3. At the top select Select and tap on each photo you want to select it.

5. LrM will then begin importing.

The beauty of this is that as LrM imports, it will tell you ‘successfully imported’ or ‘skipped duplicate’, although, sadly, it doesn’t give a running indication of it importing (spinning disk or growing line), nor does it indicate the file name in the blue message box.