Importing pictures on iPad and iPhone is a pain as you have to first import them on the device before importing them into LR, and then delete them from the device.It would be much esaier to import dierctly to LR, but this light be a “technical” limitation. I home Adobe is talking to Apple bout this. (Cfr Keynote)Another way would at least to be able to drag pictures into the album as shown in the picture below: 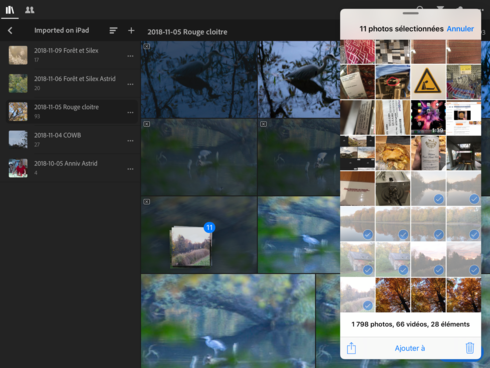 This is indeed a limitation of iOS. I'm sure Adobe feels the same way as you, but their hands are tied as long as Apple doesn't untie them.

Dragging picture "into" LR is also a limitation of iOS?

As you are dragging the images from a standard iOS dialog, yes I think that is also something Apple has to facilitate, not Adobe.

I haven't tried it, but iOS now includes the powerful Shortcuts app. Maybe you could use that to speed this up.

Indeed, dropping the images from the Photo app as Apple promotes it. I believe that’s not an Apple limitation but I’m not sure about it.

This doesn’t work inside LR either. It’s not possible to drag images from one folder to another, which would be more appropriate to a mobile UI than selecting files and hitting the “move” button.