Lightroom was messing up so I restarted computer. Still didn't work. I uninstalled and then shutdown and re installed and restarted again and nothing will fix it. When I click the plus sign to add photos it does absolutely nothing at all. I have tried everything. I cannot get it it to add photos at all and it deleted all my albums so thanks for that.

Federated (Corporate and Education) Licenses can download and install Lightroom Desktop. However, Services need to be enabled on your license in order to use the product. Lightroom Desktop relies on storing your catalog as well as your images in the cloud. If your license does not allow for Cloud Services, you will not be able to add photos to your Lightroom catalog and the option will be grayed-out. If this is the case, you can contact your Adobe License Administrator and ask them if:Lightroom Classic is also likely available via your Federated License and does not require Cloud Services to function.  It would be another option for you.
Adobe Photography Products

Greetings Joe, It looks like you have two different problems going on.1. You are unable to Add PhotosFirst step is to reset the Lightroom CC preferences: While holding down [Opt]/Alt]+[Shift] launch Lightroom CC.  Overwrite the preferences when prompted.  Can you add photos now.2. You have Albums which have disappeared.  Is this only Albums and the Photos are still in All Photos or are the photos which were in those albums also missing?
Adobe Photography Products

I can't add photos to my lightroom either and that solution opened up the properties of lightroom. Am I doing this right?

Hello Achintya
I see you have posted this a week ago. I also have the same issue and I wanted to ask if you were able to find a solution.
thank you

I would like to give credit to this solution. Tried it first and it worked.

am facing the First problem. I tried to holt Alt+Shift and launch lightroom but not yet adding photo

I am facing the same problem.I had to export an entire edit! (785 files)Only 524 got export and the export was stuck for 6 hours.I closed lightroom and restarted and I could see the albums/folders/all photosI tried to export, nothing happened and I closed and reopenedGuess what, I lost all the photos in my lightroom!My catalogue/lightroom folder still shows 172GB of total storage.Now I can not add photos to lightroom and can not see previous photos!I am doomed at the moment as I have few assignments to finish!HELP!!

The only way I can add photos to an existing 'Album' in Lr CC-cloud is to 1) delete the album, 2) delete the related photos, 3) re-import ALL photos. Seriously! there has to be a better way.

Ditto here.  It shows that I have 8,984 photos, but I can't see any of them.  The add button and Add Photos menu selection are both grayed out.  I just uploaded all 9K photos yesterday with the goal as using this as my primary repository and they showed up fine then. 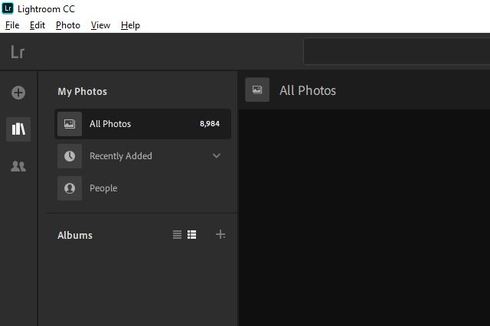 The bright side is that I only use two (Ps/Lr) features from Adobe. I'd be bonkers otherwise.

@Jeff Mikula and @emilio blanco can you go to Help>System Info... and get me your installed version number?
Adobe Photography Products

A BIT OF SHARINGHi Jeff,Thanks for your interest in looking at my issue. I think (suspect/surmise) I found the problem. After many, many [!] weeks of trying to figure out the problem, An epiphany finally put 2and2 together. So far, everything seems normal. No more erratic & syncopated behavior between the Adobe CC apps I use: Photoshop, Lightroom, Bridge (hardly if ever used), Portfolio, & Camera Raw.Last night I spent over an hour on Chat with Adobe. In the end,the techie admitted that I guided him in solving the problem. LOLOLOLOLOL!Solution: I asked techie to verify my permission & explained that my desktop ID showed up twice (don't remember where in their windows). My laptop ID showed once but, per the stupid A.I. license "feature" - desktop ID was showing up twice, & thus 3 in all. Not kosher, said AI. Many full Earth orbits ago, I had a similar situation with Windows2K... Adobe, India called & problem was settled ... within a few hours. Nowadays, like all of them super-large entities with tight britches, speaking with a human being is a wet dream. The "new HELP service" goes "..for yadda-yadda, press n.." forever. I'll take waterboarding any day over what I heard at 800-833-6687.

PLUS: why, I ask, implement software behavior with ill-intent after assuming user is on foul play?"many, many [!] weeks of trying to figure out the problem"A few months ago, I decided to upgrade my desktop from Win7 to Win10. Yes, if it ain't broke, why upgrade? ROFLMAO. Something must have gone awry during the process! Adobe AI...... - problem is only Command Central can fix their blunders.Anyway, as soon as techie "reset" my permission, four ACC app updates showed up. It was immediate! That is a vile style towards one who (as a s/w developer) respects & simply wants to legally use someone else's software!Ranting over & out!Emilio

UNRELATED;yup, if only Lr were the ONLY Adobe problem I have
I strongly feel that, increasingly, Adobe has gotten too big for its britches

That could be significant. What other Adobe issues are you having?

I am having the same issue, I actually updated to Windows 10 BECAUSE I could not download Lightroom with Windows 7. Now that it's downloaded I cannot at photos or albums, all options are greyed out, even after overwriting settings. Can anyone help?

That does NOT solve my problem! I have tried for hours to solve the issue but to no avail. I have uninstalled/reinstalled multiple times Lightroom and CC. I also tried the reset preferences multiple times. I am unable to add photos to Lightroom CC. I even tried installing an older version then updating to latest version. Nothing is working! PLEASE HELP!

Bryce, I don't see any system information from you. Windows or Mac?  What is your OS Version? Are you running CC 2.2? If you disable internet on your machine, does the app respond?
Adobe Photography Products

I have the same problem - got windows 10 and now i cannot add any photos - almost all options have been grayed out. I have the 2.2 lightroom CC version and tried uninstalling and reinstalling several times also tried to reset the preferences still nothing. There should be a way for this to be fixed. Ran the troubleshooting - it says it is run by Windows 8 - tried selecting from the drop down menu - no Windows 10. How could I fix this?

I've commented on your other post, Polly.
Adobe Photography Products