Since Android LRCC Mobile doesn't import or upload videos (see this thread), I've plugged my phone into my pc via usb. Then I use LRCC to import several videos. The problem is that , for all my imported videos, Lightroom CC shifts the Captured Date/Time  7 hours later than the actual Capture Date/Time. Seems like there must be a Time Zone setting in LRCC that I'm missing. 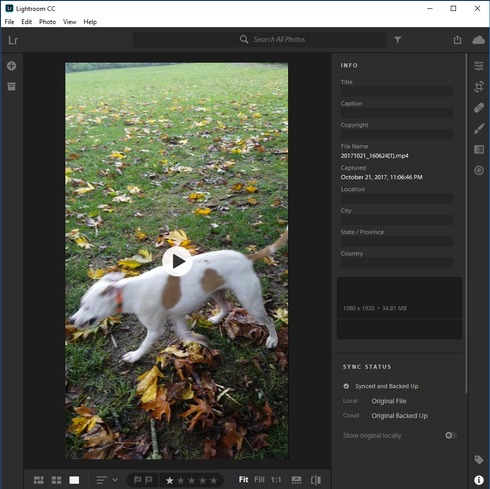 I've had this problem for quite a long time, Google Pixel and Pixel 2 devices. I think it might be something about a confusion between GMT and local time zone but have no particular insight.

Did you use the native camera on your Samsung 7 or did you use a third party app?

You didn't ask me, but I was using native Google camera app. :)

Native Camera on my Samsung S7.

Great, thanks! Do you mind if I send either or both of you an email so you can reply with a sample file? Our engineers would like to take a look at it.

That sounds great. Do you have my email address? I'm happy to send you as much information as possible to resolve this issue. I want to start using Lightroom CC. However this is a blocker for me.

Hi Rick -- any update on this issue?

It is in the queue but when it will be worked on I can't say..  It's been assigned to an engineer and will be part of a future release but when that is I don't know. Sorry I can't be more specific. I'm really interested in what John has to say though!

A likely cause of this problem is that the QuickTime/MP4 spec requires capture time to be recorded in UTC but doesn't provide a standard way to record time zone.  Some camera firmware and app software record time zone in non-standard locations. (Even more confusingly, many cameras record local time, because they don't have any notion of UTC.)

After many years of complaints, LR 6 (and now LR 7) finally started reading the non-standard time-zone location recorded in video by iOS devices.  Somewhat later, an Adobe employee indicated that they may do the same for Nikon and Canon cameras.  But they also indicated that Adobe has a policy of getting contractual permission from manufacturers before reading metadata non-standard metadata fields!

If you want to get clarity about this sooner than Adobe might respond, upload a sample video to Dropbox or similar and post the sharing link here.  I'll put it under the microscope and confirm if this is what's going on or there is some other problem.

Thanks John. Here's a link to a video i uploaded from my phone to Drive.  https://drive.google.com/open?id=1NjbiIrHUJgdZ2xKoS7HrVBb2W6GIAiXC

Here's a link to a recent video I uploaded from my phone to Drive.
https://drive.google.com/file/d/1Njbi...

It looks like the Samsung/Android software strictly obeyed the spec and recorded the capture date in UTC. And there is no time zone or indication of local time recorded in non-standard fields in the video.
There are (at least) a few ways that Adobe could improve this situation (caused by Apple's QuickTime specification failure):

- Adobe could ask Android or Samsung to record time zone in a non-standard field and give Adobe permission to read it.  They could suggest the same field that iOS uses.

- LR could infer the time zone from the GPS data (there's a well-maintained database of worldwide time zones they could use).

- LR CC could add the Edit Capture Time command that's been in LR 1 - 7, which would let you manually shift the time shown for the video.

Based on years of Adobe's indifference to capture-time issues, I'm guessing this last may be the best you could reasonably hope for.

Merging with another topic

Since the new Lightroom cc is intended four more of a consumer audience who don't want to mess around with their photos as much as someone who uses Lightroom classic, I hope and would expect Adobe to have a resolution for this issue that requires no manual work around by the user. A manual workaround resolution is a no-go for me.