Lightroom CC: Cannot delete images with the delete button on my keyboard

after todays lightroom CC update I can not delete images with the delete button on my keyboard.  Are they so it sholud be?

As designed behavior is:

MacWindowsIf this is what you are seeing this is correct and should be consistent across the app and across OS.
Adobe Photography Products

Are you Windows or Mac, Therese?Delete photo from catalog or Delete photo from Album/Folder?You might review this thread as well: https://feedback.photoshop.com/photoshop_family/topics/lightroom-cc-grid-view-vs-film-strip-view-con...
Adobe Photography Products

Wait a minute, talking just about "Backspace" key (on Windows) you mean that "Delete" is now supposed to do nothing by design? Hope not!

EDIT: This is was a reply to Rikk's comment that was deleted.

Windows, i have upload a picture, how they look like, i have same problem now when i upgrade the last version today 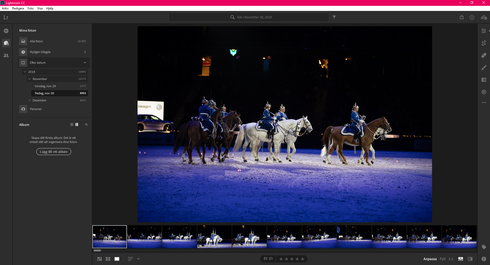 Topic was market as "not a problem" . This is how user feedback works here? Luckily I am steadfast, I'll keep writing it over and over when necessary: Rikk, you are missing the point completely. What stopped working is delete and backspace key on Windows, not on Mac. Works inside albums, works as intended, but does absolutely nothing in "All Photos" feed, does not work there.

Only way how to delete photo in All Photos feed is by right-click.

You can not be serious about Backspace and Delete keys should do nothing. Based on what did you make such a decision forcing us to use just mouse to delete photos?

But you're not "forced to use just mouse to delete photos". The keyboard shortcut on Windows, as Rikk explained and as you can see for yourself if you look at the Edit menus, is Alt+Backspace. That works in albums as well as All Photos.

You got a point, mouse is not necessary.

But why Alt+Del when Del itself is unassigned? Why they did remove Deliting from Delete key at first place?

I don't know that there's been any change since LRCC for desktop was released last year. I've just been back and checked, and in versions 1.0, 1.5, and 2.0.1 the behaviour is the same, i.e. as per the details provided by Rikk Flohr above. And that's logical, as there needs to be a different shortcut to make it possible (when in an album) to either remove an image from the album, or delete the image from the cloud.

Personally, I welcome the ability to delete from within an album, unlike the behaviour in LR Classic where it's necessary to use an undocumented (and dangerous) shortcut to delete images from the catalog when working in a collection. So Alt/Opt+Backspace is OK with me.

The only possibility that I can think of is if you are using a different language or keyboard, so maybe there was a localisation bug which has now been fixed?

Jim, you mean that because Del inside album deletes image from album and Alt+Del removes it completely Del can't do anything outside album to keep shortcuts consistent, huh? Starting to make sense now.

I am absolutely sure that Del outside albums removed photos in previous versions. And it stopped to work now without any notice, so that is probably why we are confused and complaining abou deleting is not working anymore.

That different source-dependant behaviour has caused confusion over the years, so with LRCC the design is different in that there is a specific shortcut for removing from an album (with pop-up warning if required), and a different shortcut for deleting from the cloud, irrespective of the source.

Personally, I prefer the current LRCC implementation, and it'll be less confusing for new-to-Lightroom users, though former/current LR Classic users might need to adapt to it.

In terms of your ability to use the delete key outside an album, I've not been able to reproduce it, having gone back to various LRCC stages starting with 1.0. Admittedly, I haven't tried every single dot release since then, so I can't discount that a bug crept in at some stage which allowed the delete key to work outside albums, but if so that's clearly been fixed. The other possibility is/was a localisation bug, i.e. specific to a different language and/or keyboard layout, but again if so it has been fixed.

Given that the system is working as designed, and if you really don't like it, I'd suggest you make a feature request to have the behaviour changed. Calling it a bug when it's operating in the way it is intended is not likely to get much traction, but a feature request might.