LR current allows sorting of images by a single criterion, such as ordering by 'capture time' or 'filename' or 'rating'.

Typically this is handled by allowing multiple levels of sorting (eg., as Microsoft Excel does).

This would be even more valuable if LR supported sorting by any metadata field, eg., by title or GPS latitude or keyword-value (keyword-value pairs were supported, which I'll post separately as an idea).

Note that this could be implemented even in the current single-sorting-level paradigm by allowing sorting on values (-, 0, +) provided by user-defined scripts that would have read access to metadata. (The idea of supporting user-defined sort scripts was posted separately earlier.)

Rikk - your idea works to build complex filters, but I do not understand how it works to sort.

Rob Cole, responding to another post suggesting user-defined metadata or keyword-value pairs, pointed out that LR supports keyword hierarchies. So LR already has a foundation that could serve to sort on keywords. For example, a birdwatcher might have a 'species' keyword containing subkeywords 'sparrow' and 'robin'. Then a sort on the keyword 'species' might show all images with 'sparrow' followed by all images with 'robin'. A second sorting level would/could define how images would be sorted within each category.

All this could be implemented in a UI or user-defined sort function scripts.

And/or allow the user to enter/build a query string with order (that'd cover both filtering and sorting).

(Rikk, as Rory posted, it sounds like you might be thinking of LR's filtering -- or is there something I'm overlooking? I've got LR5.)

The filter does what you are asking. Every column in the Library Folder is capable of being sorting either ascending and descending. If you set up your columns correctly it will work. See attached image. 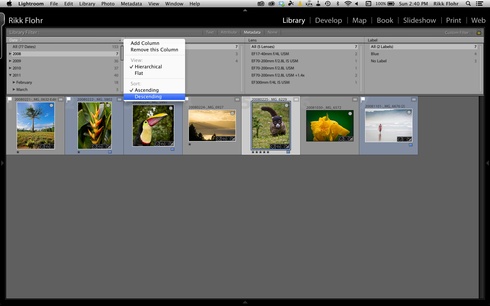 If this isn't what you want you need to make a specific example that cannot be done.

The Sort: Ascending/Descending only applies to the Date column, not to any other columns. It controls how date items in the column filter itself are presented -- it doesn't affect the ordering of photos in grid view, which is what Jim Elder and Rory Hill are asking about.

Can you show a sort by Camera, Year and Filename? Not a filtration, but all photos sorted this way?

To me, Sort and Thumbnail order are two entirely different things.