After recent update of Lightroom which adds profiles for the new Zeiss Milvus lens, my photos taken with the Sigma 50mm f/1.4 art lens, when imported to Lightroom, now displays the lens as Zeiss Milvus 50mm f/1.4 instead of the Sigma one.And the profile that lightroom selected by default is the Zeiss one instead of Sigma one. The profile issue is minor, since I can manually select the Sigma profile and save it as default. However, a bigger issues is while searching photos. For example, is I want to see all photos taken with the Sigma 50mm lens, then those tagged as Zeiss lens won't show up.Previously, the Sigma 50mm are simply named as "50mm" in LR, which is a bit annoying but not a big problem since other 50mm Canon lens I have display their real names.A closer look of the files by Exiftool tells me that probably both the Sigma and Zeiss lenses use the same Lens ID (I believe it's the Canon 35mm f/1.4 L's lens ID). The exiftool shows "Lens ID : Sigma 50mm f/1.4 DG HSM | A or Zeiss Milvus 50mm f/1.4"Is there anyway that I can configure LR so that for this particular lens ID, it will always be identified as the Sigma lens instead of the Zeiss lens?

EXIF lens data is read-only in Lightroom and Adobe Bridge. I don't recall offhand why we chose to keep these properties as read-only, but there was potentially a good reason for that. You could use a command line tool such as exiftool to manually edit/update this metadata, which should be reflected in the Adobe products.

The short list of Nikon profiles you mention makes me think you are attempting to apply a profile to a JPEG and not a NEF raw file.

Also, for the record, the second part of the original issue here (resolving images with prior edits) has been resolved for a few releases.

Apologies for the lens ID collision. This will be fixed in the next release of Lightroom and Camera Raw. In the meantime, you can do the following to work around this.

Images made with this lens will now correctly select the SIGMA vs. Zeiss Make. Once the official fix is in, you can select the Setup menu in step 4 and choose Reset Lens Profile Defaults clear this setting. That will enable both the Zeiss or SIGMA lens to be matched correctly in the scenario where you have images made with either lens.

I'm having a variant of this problem.  The metadata panel shows the correct lens information.  But when I filter/search  in a grid the Sigma is just showing up as '50mm'.  This is making things tough for me as I have a few older 50mm that also show up this way (don't expect lens profiles for those as they are not reported to the camera).  Help?

Have you tried selecting the images and choosing Metadata> Save Metadata to File and Metadata> Read Metadata from File?

Does this also happen with newly imported images made with the SIGMA lens?

Chris, I have recently updated LR Classic to release 7.1, yet this anomaly persists for me. I just tested by importing an image and while the profile for lens corrections is correct, the Lens ID in the metadata simply reports a "50mm f/1.4".

Hi Bruce, The string "50mm f/1.4" refers to the lens name in EXIF. Some camera/lens combinations write a specific lens model name, while others (e.g. Nikon) write a more generic name. The lens ID is usually a decimal or hex value that is used internally to facilitate a profile match along with parameters like the lens name. Lightroom/ACR generally avoid overwriting the EXIF lens name unless it is the only way to achieve a profile match when other lens parameters are ambiguous.

Considering that by the time the image gets into LR and no longer subjected to camera manufacturer's perview and the image is now sole property of yours truly, why would we not be granted opportunity to change any element of the metadata . . manually or through LR? The purpose of the metadata is somewhat lost here, in that, I could have multiple '50mm f/1.4' lenses and now can't tell which took the image I'm looking at.
I've imagined that the LR database has a table of the lens data containing much information about that lens. One piece would surely be the name of the lens (Sigma 50mm f/1.4 DG HSM) that could be used to populate the 'Lens' field in the metadata. Granted, I'm not privy to the table layout in the LR database, but this approach would seem ever so simple/appropriate. Can you explain why this approach was not taken? Thank you!

The decision to treat most EXIF data as read only in Lightroom was made early on. Unfortunately, I do not know exactly why. One reason that comes to mind that is related to EXIF lens data and profile matching is to avoid the need to rely on a huge internal database of lens/camera combinations when existing camera-generated EXIF data is often sufficient enough to enable profile matching.

Understood. Thank you much for your time, Chris. Happy Holidays!!

I just ran the latest version of Lightroom with the fix. (Lightroom version: CC 2015.4 [ 1060496 ] on a Mac.
In the develop module, the correct profile for the Sigma is applied, but in the library module ( rather than develop) it still shows up as the Zeiss, and in the library filter by metadata, it still shows Zeiss data. The xmp's also show the same incorrect information for the Lens but the correct information for the lens profile.

What now?
Manual editing of the exif data?

We are are aware of this and working on a follow up fix for images that have already had edits committed. You should not be seeing this for newly imported images.

My problem is not with a Sigma lens but it falls under "lens metadata corrections." I shot RAW with a Nikon Df and a 300mm manual lens from decades ago. The metadata says 0.0mm f/0.0. How do I correct that? When I do as described above I only see 8 Nikon lenses none of which I own and under profile Nikon Coolpix which surprises me.

Another bug is that for the Sigma 35 and 50mm Art lenses when file info is displayed with Camera and Lens in one of the info fields. Only the focal length shows up not the make and lens model. Very annoying if you have more than one lens of a certain focal length. It seems to be only a problem with Sigma Lenses, Canon and Zeiss lenses all show up with correct models.

Lightroom is becoming very buggy, not impressed with the increasing number of problems in new releases.

This reply was created from a merged topic originally titled Lens Name Incorrectly Displayed in Metadata.

The "Lens Correction" profile in LR Classic for the Sigma 50mm f/1.4 DG HSM is correctly selected. However, in the metadata, the "Lens" value simply states 50mm f/1.4. I contend the metadata should reflect the name of the lens, as happens in the Lens Correction dialog.

I'm having a similar problem after the latest update, except that my Sigma lens is now showing as "Tokina opera 50mm f1.4 FF". It would be great if Adobe could fix this!

I checked several of our calibration files, including the SIGMA and Tokina 50mm F1.4 models and I don't see any conflicts. If possible, please provide a link to a sample raw file that exhibits this behavior so we can investigate.

Thank you for providing the test image. I confirmed that it does pick the wrong lens profile and identify the lens name metadata incorrectly. The underlying issue is a lens ID and specification conflict between the 2 lens models. This happens occasionally with 3rd party lenses. I will investigate whether there is a reasonable solution for this on our end. In the meantime, there are a couple of things you can do.

1. For existing images, manually select the correct lens profile and then set a new Lens Profile Default in the Lens Correction panel fly-out menu. This will ensure that the correct profile is selected for your images, but unfortunately doesn't resolve the issue with the lens name in the metadata.
2. Update the lens firmware for the SIGMA lens. Later firmware uses a different lens ID, and should not result in the mismatch or the incorrect lens name in the metadata for new images.

I'm having the same problem. In Lightroom Classic (latest version), picks my Canon Fit Sigma 50mm F1.4 Art as a Tokina Opera 50mm.  Total nightmare when creating presets for use across other Lightroom platforms. I have to filter by lens type when back on my PC and set the lens profile correctly.  I thought this bug had gone away but there is clearly something odd about how Adobe interpret lens metadata with the 50mm Sigma Art.  Previously it was mistaken for a Zeiss 50mm F1.4. Come on Adobe this really should be sorted out, its an established middle aged lens now!

The firmware also fixed the AF accuracy (known issues with Canon cameras and third party lenses): In order to fix the AF accuracy I had to "reset to default" the custom Focus Setting

With the firmware ver. 1.01, AF was way off, as you can see in this picture 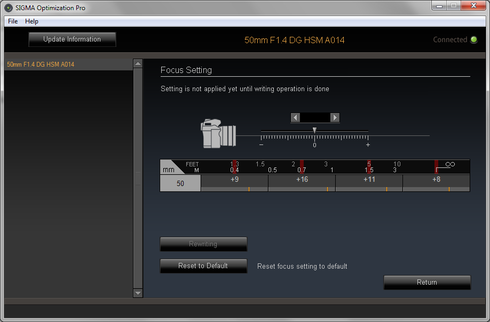 My sigma 50 f1.4  has the same issue on LR rel.9.0 and camera raw 12.0. Previous version let me choose  the correct lens. Now the are just couple lenses when sigma brand is selected. Please fix this. Four years has taken since this has been reported.

It is showing "Unable to locate a matching profile automatically"

Oops solved!
I had set jpg mode for some pictures on camera. There is no profile option for JPG, only in RAW!
If you have similar problem, check first that you are editing RAW files!
BTW (it should not show Tokina opera anyway, that is the bug on LR)