In Lightroom versions past, there was a strange bug which affected the Watermark feature. Putting it as concisely as I can, certain fonts (not all) when chosen for the Watermark feature would sometimes cause the text NOT to appear on export....this 'non-appearance' was controlled by a combination of the pixel size of the image being applied to, and the proportional size selected in the Watermark settings. Somewhat strangely, for affected fonts the larger the pixel size of the image then the smaller the proportional size needed to be. And just to make matters even more complicated, there was little consistency between affected fonts.

I had initially thought the problem had been fixed in the 3.3 update. I had not been personally affected, my chosen font did not suffer from this problem, and my familiarity with the issue only stemmed from trying to trouble-shoot it in conjunction with a few others (e.g. John Beardsworth) over at LightroomForums.

However, a few days ago a new member reported a problem with 'non-appearance of her Watermark when using a downloaded font (Fiera da Fruta)'. On investigation and testing it appeared remarkably similar to the previous problem (and yes, I am at 3.4.1). So I decided to dig a little deeper and discovered that the same problem occurs at least with the Lucida Handwriting font (which was one of the fonts implicated last year).

Other fonts, e.g. Arial, which were also affected last year seem to be OK (I pushed the proportional size all the way up to 72 and it still appeared on my largest image).

Conclusion, the 3.3. 'fix' apparently didn't fix all fonts....there is still a problem in this area.

Jeffrey, can I somehow send you a PM from here?

I've exported about 20 images in the past 2 days. Suddenly ran into a problem on about the 10th export with my export data in the history disappearing. (I use that to export color with and without watermark, then change to b&w and export using the history data on that as well.) I updated to LR 3.4.1... rebooted everything. No change. The only thing that fixed it was deleting all of my history for that photo, resetting the picture to original and re-doing all of the edit work. Now today, I'm trying to export with the same jpeg watermark I've been using the the entire time but now my watermark won't show up. I have it at 65% opacity and the box is check marked to use the watermark. Is there something I'm doing wrong or this a bug? If so, is there anything I can do to fix it? I'm afraid I'm going to have to delete my history and start from scratch again.

I'll update my own since a friend who uses Lightroom had the same issue:

You have to re-load the original watermark jpeg in the export screen.

I have Lightroom 3.4 on 64bit Windows 7
I found that in the "Print" module that when I create templates with image(s) within a different size sheet (ex.4wallets on a 5x7 print) the "Watermarking" is in the right spot in LR on all the images even if I adjust the image placement within the template for better composition, but when I "Print to file..." to export and look at the final output the watermark has moved over or is clipped (for some reason if I move the image within the template for better composition, those are the ones that my watermark has moved in output instead of staying in the corner of the template as it shows in LR). So LR shows it is properly staying where is should until you check the exported image, and the watermark is in a different spot than wanted. Can you fix this LR bug??
I'm trying to post images of LR view and final output result of a square image within a 5x7 below....

This reply was created from a merged topic originally titled
Lightroom: When I "Print to file..." the watermark has changed position or is clipped.

Mine is a logo graphic...not a font at all. Exporting images jumps the logo to a different position than shown in Lightroom, but only when I've moved the image within the frame to re-compose the image for a different sized print than the original image. The ones I did not shift over within the new frame size, do not shift the logo. Again the logo looks as it should in LR, but in the exported image the logo has shifted with the image corner instead of staying put in the corner of the frame.

I am still suffering this problem with a Windows True type font unless the output resolution is under 1000 pixels on the long side.... Help?!? Running LR 3.4.1

I am also having problems with creating watermarks.

I have Lightroom 3.6 and using Windows 7 (64-bit). I have a watermark created that I use when I export images using "File > Export with Preset". The watermark is rendered when I export a TIFF or PSD file but not a JPEG file. It is the same watermark, I just change the file type.

Below is an image of the watermark settings and the export settings: 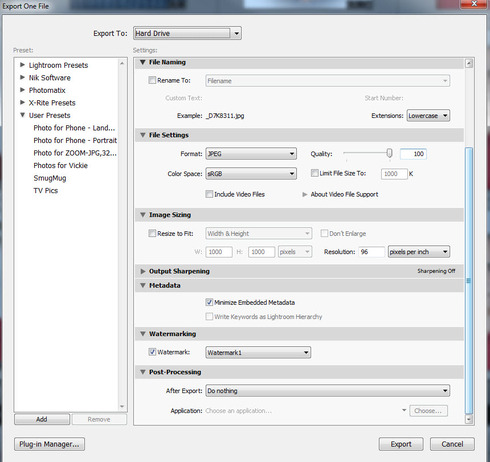 I have been editing some photos and wanted to upload them to Facebook with watermarks on them. On the first attempt out of 55 photos only one had a watermark, deleted and re-tried and none got watermarks. Tried exporting to hard drive, none received watermarks.

I've tried with my imported watermark and also using just a text watermark. I also have no control over where it wants to put the watermake, bottom left corner only, it won't let me move it, even when selecting Right Justify...

If I have an export preset that adds a text watermark, it works fine in any image that is either already smaller than, or gets resized to 3118 pixels in height. If I tell it to resize to 3119 pixels or higher, then the watermark is never added.

I usually crop all my images to 8x10 ratio. And then dont resize them at all, so they stay at their maximum resolution.

The watermark is simply a TTF Font, set to show up proportionally in the lower right corner.

This reply was created from a merged topic originally titled
Lightroom: Watermarks disappear on images in portrait mode larger than 3118 pixels.

I am having problems using the Watermark feature in Lightroom 4. I just updated the program. When i export photos, lightroom will not put my "graphic watermark" on the pictures. Also when i try and open up the dialogue box "edit watermarks" to try and change the graphic watermark that i made in photoshop (png file), it just completely disappears. It does not allow me to make any changes to the multiple graphic watermarks that i have previously imported. Can anyone help me please?

This reply was created from a merged topic originally titled
LIGHTROOM 4: Problems with using Watermark Feature.

I ENCOUNTERED THIS PROBLEM WITH LR4 TODAY. MY WATERMARK WORKED YESTERDAY, BUT SUDDENLY STOPPED WORKING TODAY. I HAVE NOT BEN ABLE TO RESOLVE THIS ISSUE. LOYS. CAN ANYONE HELP? MY EMAIL IS LOYS@DEFLEURIOT.COM

LR5, and the watermark is ineffective. Sometimes it works (mostly when I don't want it), but most of the time it doesn't (when I really want it to work). What gives, Adobe? Shelling out money each month for CC and one of the programs I use most doesn't even deliver the product it is supposed to?! On export, I have made new watermarks, altered others, and despite having the Watermark box checked, nothing appears on the exported file. The program is updated. I have restarted LR5. I have restarted my computer. I have done these things in a myriad of orders and combinations. Even more than cussing someone out, I would like this problem fixed. It's even more frustrating that this is an OLD fault with LR.

LR5 installed today an watermark feature does not work!

Picture or Text based Watermark?

It is a picture. I think the problem is resolved however as I was looking at the photos on the Finder after exporting them from LR5....In the Finder the watermark doesn't show on the images....however when you open the photo the watermark is in fact applied...Weird still but it seems to be a Finder problem and not a LR5 problem.

Watermarks are only applied when you Export, Publish, Print, Slideshow, or generate a Web Gallery. They won't show upon your existing images normally.