Yes please, add support for live photos.
It is now very popular and make sense.
Please make it as fun and nice as it is on iOS but let us access .jpg and .mov separately if we want to do so.

Adobe, do you realize that this "new" picture format is out there for more than one year on that you do not propose a serious support in Lightroom yet ?

What should I do with these live photos ?
Will I ever be able to playback the ones I already imported or shoud I keep waiting to do a correct import after you release an update to support this format ?

Also in a second time, a Live_photo to GIF or MOV export is important to share them, what do you think ?

Please give us a feedback.
Thank you.

Hi again,
Just imported a few photos, videos and Live_photos.
There is a bug somewhere with the videos of the Live_photos ( iPhone 7 plus, iOS 10.0.2, LR 2015.6.1) but I do not know where.
In the finder all the videos are working fine.
In the import windows and in LR, some of the videos from Live_photos are bugged. Normal videos are not. I tryed to download from the phone again, same result.
The screenshot shows 1 Live_photo ok and 2 broken ones.
Markinho

Markinho,
What happens when you import those files? Do they get imported?
See if you can send those problematic files to us.

Sunil, thank you for your email.

I sent you a link to my Dropbox with the 6 files from the screenshot.
The files are all imported.

In the finder, all the videos are correct.
I can play them also, no problem.

Downloading the files from the phone again will have no change.

Let me know if I can help you further.

Thanks, Markinho.
We are verifying the videos.

We could reproduce the issue. Thanks for sharing them.
It really helped. We are investigating.

I have this same problem with some of my iPhone 7 Live Photos.  Some work fine in Lightroom CC (latest update), others give me the green preview and wont play within Lightroom (or Bridge) but play fine outside Lightroom.

Any idea when a fix may be coming? Thanks

You are welcome !
I am glad you asked and I am happy everybody will benefit the improvement.

I am importing Live photographs from iPhoneX into LR 6.2. I cannot DEVELOP them because LR treats the Live stills as movies. What is the fix for this problem which from these earlier exchanges has been an on-going problem for several years? Thanks.

Even with the latest LR CC, you can import and develop it, but you would lose the "Live" part.  You would end up just a regular static photo.

I imported them onto my MacBook Pro but they were imported as 1-2 sec video files so LR CC 6.12 will not develop them. Any suggestions?

Hello,
Is there any estimate on when the support for live photos will be available?
Thanks!

In Lightroom 6.8, on Mac, when you connect iPhone directly to the system and import, you can import only the JPEG file.
On Mac, a workaround is to, select "JPEG files next to the raw files as separate photos" in the Preference.
Importing of Live photos directly from iPhone is supported on Windows.
We are working on the Mac issue.

Suffering under the very same issue since I switched from iPhone 6 to iPhone 7+ with Live Photo support. Once you fixed this please also describe the recommended way to reimport all the RAW currently missing photos imported into Lightroom for which currently (only) the live videos are already in the lightroom database...Thanks for your support! Christopher

I have an iPhone 7.  I have Lightroom CC 2015.8. I am running OS X 10.11.6.  when I import Live Photo images from my iPhone to Lightroom, with jpeg+mov treated as separate files, I get MOST of the jpegs and a separate .mov file.  However the .mov file is 2-3 sec file that has rainbow snow or just a green screen in the lightroom preview and play of it.  On the desktop, the .mov file exits as a true movie file with all data. A FEW of the live photo files come with both .mov and .jpg and both are seen by Lightroom.  but very few.


Most of the .mov's are not seen correctly with Lightroom, even after
thoughts?
sp

Thanks for the comments, SP.
This is a known issue with Lightroom. We are looking into it.

Sunil-thank you for that.  Seems this has been going on since Live Photos was introduced, yet no appreciable shift in being able to handle the format seems to be functioning.  I imagine you are might not be in charge of fixing it....but is this something that is even being worked on?   Thank you again for attention to this issue
sp

@Sunil Bhaskaran: Do you have a status update? This is an absolutely must-have thing for me and the others. Thanks!

Lucky & Scott,
We are working on the issues related to Live photos.
The next Lightroom version should fix most of the import related issues.
We are currently investigating an issue that some of the mov files in Live photos do not play correctly.

This reply was created from a merged topic originally titled Support for live photos: Can you advise? My iphone 7 is full and I need to make s....

I've imported all photos into LR but have the same problem as others have mentioned (green screen). My question is, can I delete the files off of my phone (desperately need the space) trusting that I will able to see my already imported live photos on LR when there's a fix? Any other suggestions? Thanks

If you can view your photo files properly in any other software tha LR they should be safe. If not, stay on the safe side and keep them on the phone or copy them elsewhere.

This issue should be corrected in this release. Please give it a try and let us know if you see any further issues.

Complete information about this update can be found at the Lightroom Journal: http://blogs.adobe.com/lightroomjournal/2017/03/lightroom-cc-2015-9-now-available.html

If you don’t see the update in your Creative Cloud App, you can use the kbsc [Cmd/Ctrl]+[Opt/Alt]+[ R ]  to refresh your app. If you are a perpetual license holder, you can access the update via Help>Updates...

Refer to this for any installation issues: http://blogs.adobe.com/lightroomjournal/2013/06/keeping-lightroom-up-to-date.html#lrcc2015
Adobe Photography Products

Installed 6.9, but I get some green mov-files when importing live photos.

Michael,
Some of the mov files may ran into this issue. We are working on it.
Does it mean that all your mov files are displayed like this?

I just verified this again as well on my iMac using iPhone 7+ after installation of the latest LR update.Some of the short live photo videos show okay, but many are unfortunately still shown in green in preview and playback also does not work (nothing but green is shown).
Also there's still an issue when the iPhone locks the screen during an ongoing import process, this typically leads to interruption of the import process. When I have to import a large number of new pictures, this almost always happens due to the very slow import process (iPhone 7 and Retina iMac).
Honestly, I am still not happy at all with this. The iPhone is a VERY commonly used device for photography these days, and personally while some others might not I like the idea of live photos. Since the issue started the import process in combination with the iPhone is slow, unstable, incomplete and my trust in it is down to zero at the moment (which is why I never deleted a single picture on my current iPhone cause I'm still waiting for Lightroom to be reliable again and show all the live photos correctly (= photos + the short videos)).On the other hand I like the editing functions and workflow of Lightroom, which is why I would prefer not having to switch to Apple's solution instead. With my Canon DSLR Lightroom just works perfectly fine as always, but meanwhile the number of pics I take with the iPhone is much bigger and a stable and robust import process for this device as well is critical for me.

Please keep us updated here about your progress in fixing these still existing very painful issues. I am really happy to see that you are watching this discussion and take our feedback over to your R&D team!
Best wishes, thanks for your support!
Christopher

I second this. Keep up the good work Adobe. iPhones, Pixel and S7/S8 should be top priority these days.

Sure, Christopher & Gregard,
We are aware of the Live photo issue you mentioned (some of the movie files displayed with a green preview) We need to update a component that we use for video rendering. We are working on it. I will let you know once we have some progress.
I thought even after iPhone is locked, an import process that has already started gets completed. Isn't it the case?
Thanks again for the feedback.

Hi Sunil,
Great. I am wainting to import my live photos too :-)

Yes, I still experience a problem when the iPhone locks its screen.I am just trying to import only the new pictures on my iPhone 7+. During rendering of the previews in the import selection pane previews don't get rendered anymore after the iPhone screen locked itself after few minutes... (see following screenshot) 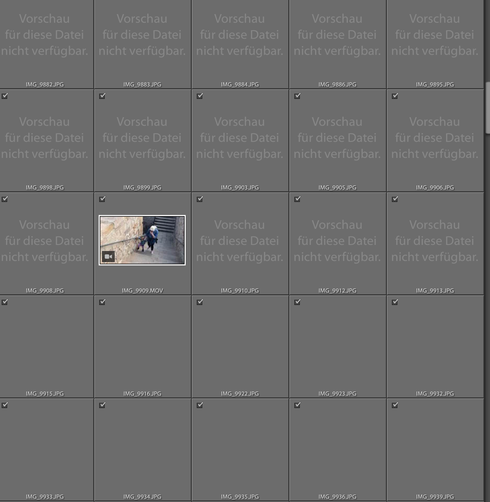 The text in the preview frames says in German language "preview for this file is not available". After a while that text appears in every preview frame and not a single additional picture is rendered anymore which makes image selection impossible.At this point I have to cancel the import process, unlock the iphone again, go again in the import window and remember to touch the iphone screen once in a while so it doesn't lock itself... I just did this and almost immediately I saw all previews in the import selection window (no idea why at second attempt they show up so extremely quick?!). The actual import process itself seems very slow to me, but that might just be a feeling caused by many video files I have usually on my iPhone that take long to import. In many cases when I start the import process the even minutes later I don't even see the first picture or video from my iPhone appearing in the "Current Import" picture folder. I will try to find out if that's also caused by the screen locking after few minutes and then update you later again.Best wishes, Christopher

I can confirm that the actual import even seems to continue when the iPhone 7+ screen is locked. BUT I just watched it during import and it took about 3-4 minutes until the first picture actually appeared in the "Current Import" folder, which seems crazily long, once the first picture appeared the rest of the pictures appears rather fluently. This is all very, very strange...  Hope you report this feedback back to your developers and find a solution for all these reported issues to make Lightroom the best tool again to work, develop and organize more than 100K photos in a robust, fast and reliable way.And I'd like to mention again: Thanks, Sunil, for listening to us here and supporting us!Best wishes, Christopher