I have just bought Light Room3 (v3.5) on Dell Latitude E6520 with an Intel Core i7-2720QM processor, 8GB RAM and a 256GB SSD. I store my photos on a RAID5 NAS. When using the spot removal on .jpg files (so far it has not happened on raw - Nikon D7000 16MP .nef files) if use the tool more than twice in a row, LR freezes - the little hand makes a fist, processor works, memory used increases - looks like program is in a never ending loop). If I stop the program and re-start, the change is there. I notice on the web that this has been a problem for over a year but I cannot find a sensible fix. (There are many suggestions about bad drivers, bad power supplies etc.) Is there a fix? if so, what is it and where do I get it?

We did some testing on this issue over at Lightroom Forums and identified that (at least on version 3.5) there is definitely a problem related to Windows 7 on a multi-core system. See this link: http://www.lightroomforums.net/showth...

Doesn't happen on LR2, but I'm not sure about earlier LR3 versions as I haven't had time to go back and test.

Thankyou - it's good to know that I'm not alone. One thing for me try would be to re-install without adding the updates.

Is it possible the graphics drivers need updating? What video card are you using? Do you have more than one monitor set up? What's the resolution of the monitor you are using?

I'd go directly to the nVidia or AMD/ATI site to make sure you have the latest drivers.

I'm using two monitors - both are full HD (1920 * 1080) with an nVidia card (sorry not at home so don't know the exact version). My feeling is that it's not this as I updated all drivers about 2 months ago - I only have LR3 a couple of weeks. Nothing else freezes when this happens, any other program running works normally and I can see the memory in use by LR3 increasing.

Its possible my comment above only demonstrates my ignorance of how LR3 works. I'll try this and the other possible solutions tonight. Thanks for the reply, I'll keep you posted..

I have noticed that it is more frequent when working on files that I had edited in photoshop and then saved as psd. Also tried operating the catalog on both drives, SSD and hard disk, no change.

IMHO, there is definitely a problem in LR 3.5 cloning in 1:1 zoom level related to JPEG images and multicore processors.

I also did some testing related to the thread Jim mentions at lightroomforums.net. I tested with both my

and they both show the hangs (freezes) in spot removal when done in a 1:1 zoom level. Dedicating LR to run on one core only makes the problem disappear on both systems.

Please see also this thread over at the U2U forum which discusses the same subject.

This is a sample image on which the problem occurs quite heavily. I don't know what kind of JPEGs show the problem the most, I've noticed that pixel dimensions have an influence (very small JPEGs seem not to show the problem).

P.S: If you need any instructions on how to reproduce the problem, please ask. The original post in the thread Jim mentions describes it pretty well though.

Hi Beat, many thanks, I'll try this tonight along with Jeffrey's suggestion.

If you want to try if setting LR to only use one core, here are the instructions on how to set processor affinity for a process:
http://www.addictivetips.com/windows-...

Thanks - I'll post my results in a moment - I think it is a thread problem :-)

Thanks guys. Appreciate the additional details - just want to make sure we've debugged all possible culprits - and have a complete picture with which to have someone on the QE team try and reproduce.

If you give me an e-mail address or access to an ftp server, I can let you have a copy of the image and detailed instructions on how I get it to freeze.

Hi Jeffrey, I have done some tests and think it is probably a thread problem. This is the 2nd time I've typed this in so will do it in bits this time. 1st the remaining hardware details. My video card is NVIDIA NVS 4200M 512MB (45W) Discrete Graphics see below 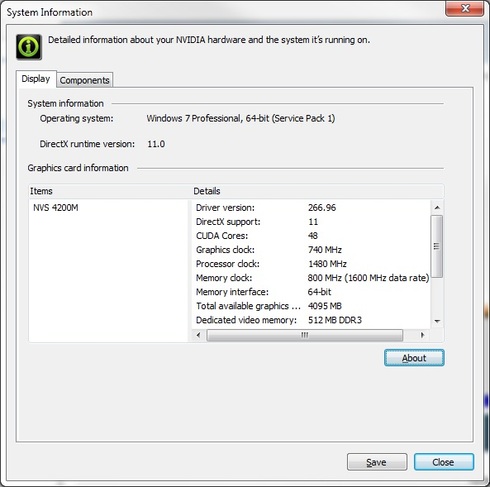 I did the same using a jpg version of the same photo (from the camera) and always had problems at 4:1 zoom when LR3 'froze after the 1st or 2nd attempt.I had no problems at 1:1 or 11:1

I noticed when LR froze, one core was always working harder that the others. If I unselected that core, 9 out of 10 times LR 'unfroze' as I pressed the OK button in the 'Processor Affinity' pane.

My first thought was there was probably some sort of race condition with one thread looping (not always flat out - the hardest working thread I saw was about 80-85% and it 'grew' to this level over a couple of seconds.) possibly waiting for another thread to finish but would stopping the looping thread before it finished allow other threads to continue?

Hope this all helps
George

Thanks for your findings, George, which match what I experience, although I did not go that far with testing.

George and Beat, does the bug still happen for you with Lightroom 3.6 (now available on adobe.com)? I tried clone spot removal with Beat's sample image, zoomed to 1:1, and added over 30 spots without any problems.

This is the same problem you and I discussed directly when V 3.0 was released. With each passing update I hoped, as did you, it has been resolved but through 3.5 no solution seen yet. There was some improvement around 3.2 or 3.3, I don't remember, but it is still there.

It seems fairly certain to be a core resourcing problem. I have turned hyper-threading off and the problem/lag is significantly better (as other have suggested) and it is clearly worse on JPEG images (again, nothing new being reported). When I do still see the spot-healing hang, or if I visit an image in the Develop Module which had a significant number of spots previously applied, I view the "CPU Usage" gadget I have running and always when this hang occurs, one core (random) is always at 100% and feels "stuck". As soon as it drops down below 100%, all goes back to normal.

I haven't loaded 3.6 as there was no indication that this issue was worked on since 3.5 thus I saw no need. Others don't seem to see any improvement either so I assume it is still the same old issue. I have tried both Nvidia and Ati cards and updated software but the problem persists.

Hopefully when version 4.0 comes around with the much sought-after healing brush they have figured this out since it is likely to be much more computation intensive than the spot healing tool :)

Best of luck tracking this down.

and always when this hang occurs, one core (random) is always at 100% and feels "stuck"

This is not what I (and others who have tested) see during the lockup. This is a snapshot of my CPU usage during such a lockup, note that the hang was resolved where you see the sharp decline in CPU usage on several cores.

Beat - and that is probably why this problem has persisted so long, it can't be consistently described or duplicated between machines. Do you have the i-5/7 cores or the Xeon series? I have the Xeon E5520 2.27GHz processors (2).

No, I'm afraid it still happens but it seems sometimes to be more likely to come back by itself - after 20-25 seconds. (at least it did it twice which I'd not seen before)

I haven't installed 3.6 yet, I'll test and report back after the week end.

First test: made two clone spot removal attempts (each case rather extreme long distance clones), got the closed-fist lockup on the second one and this did not clear so had to force quit using Task Manager.

Second Test went better, was able to apply copious spot removals but did not attempt to update the sampling spot from the LR selection. After 20-30 of these I then started adjusting the sampling area and got the 'temporary for a few seconds' closed fist. Slow and jerky, but could survive.

Fourth Test: tried to repeat the first test, and on the very first attempt the cursor/fist simply disappeared (the cursor reappears when I move outside the Lightroom window).and still hasn't reappeared within Lightroom while I was typing this note. Another force quit required.

So basically no change at all from 3.5.

Question: was there a specific fix applied in 3.6 for this bug?