Lightroom: Search and/or identify images that have been flipped horizontally or vertically

In Lightroom it seems to be impossible to tell which images have been flipped horizontally (or vertically for that matter) as there is no visible indication (no icon, no listing in the metadata panel, no check next to the setting in the Photo menu.
Ideally I would also like to be able to search or create a smart collection to find flipped images.  As it currently stands accidentally flipping images (such as having more images selected than you think when flipping one image)
An indicator (either a check that shows up next to the "Flip Horizontal" or "Flip Vertical" option or even an "orientation = 2" metadata field would be sufficient) and a means of searching for the status of the flip or the value of the orientation would be very useful.

I agree, it's strange that there is no indication of mirroring.

As workarounds, the Any Crop plugin shows the current mirroring (horizontal or vertical) and rotation of a photo. The Any Filter plugin lets you search for photos that have mirroring applied, e.g. 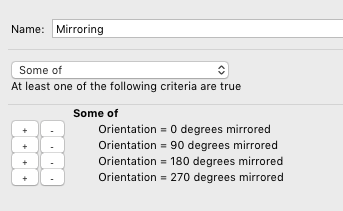 In addition to that, I'd also like to suggest that a Reset of the Develop settings reverts flipping of images.

I don't think that is a good idea. Flipping and developing are two different things.

Well, then let me say it this way: there should be a button/feature/function that resets EVERYTHING - including any flipping.

Again I'm not so sure if that would be a good idea. That would also wipe out metadata like keywords, for example. Would that be what you want too? Sometimes the best solution is not a one click solution, I'm afraid.

An option to revert an image to an entirely clean state would be nice too.

(this may be philosophical but in my opinion, flipping an image is very much a step that is part of the Develop process)

> in my opinion, flipping an image is very much a step that is part of the Develop process

FWIW, I agree. It's been debated long and hard over the years, because in some cases (e.g. astronomical photos) you may not be able to tell you flipped it. I believe it should at least show in History.

I disagree. There may be all kinds of reasons to flip an image, such as to get a better composition when placed in a book. Or simply because it improves the composition. Or the examples below, like a scanned slide that was the wrong side up. All that has nothing to do with developing that image.

Next thing somebody asks is that Auto Tone will also Auto Flip the image if the artificial intelligence decides that makes it a better composition?

I disagree with your disagreemet.... if an image was changed in any way it should be recorded in history.... end of story.

Rather than argue about "should" or "shouldn't" or "philosophy", I think the only way to make progress on such a product-design issue is to step back and ask why the user wants to flip (mirror) or rotate images and where that fits in the user's workflow.

Here are the reasons I came up with -- are there more that don't easily fit into these categories? Why photos get flipped (mirrored):

- The image was scanned with the film accidentally reversed, and though with some scanning technologies you may get a better image by rescanning, it's inconvenient or impossible to rescan or the current scan is good enough.

- The image was taken through a telescope that mirrored the image.

Why photos get rotated:

- The image was scanned and the original image was rotated (e.g. scanning a portrait negative or a photo taken from a copy stand).

- The image was taken through a telescope that rotated the image.

In terms of workflow, I've accidentally flipped or rotated a whole batch of scans at once, failing to notice that I shouldn't have included some of the photos in the batch selection. The larger the mistake, the harder it is to recover.  LR gives no indication of the flipped and rotated states and no easy and reliable way to set a photo or batch of photos to their as-imported state.

Finally, as Victoria has implied, all other changes to the visual appearance of the photo are recorded in History, and the Reset button resets all other changes to the visual appearance to their as-imported state, but there are no equivalent mechanisms for flipping and rotation.  It's not at all clear to me why, from a use-case and workflow perspective, flipping and rotation, which also change visual appearance, are excluded from History and Reset; but the more important issue is that the functionality is simply missing from LR.

Good points, and in many cases that clearly means that flipping and developing are two separate things.