I have a workflow that involves importing thousand of raw photos and then sorting them. In order to sort them, I take a group of photos of the same subject and move them to a temp folder and then repeat until all the photos have been moved to sub categories based on there names. I then move the photos out of the temp folder into the original folder and delete the temp folder.
While attempting to move the folders containing the photos, one of the folders and the 97 photos under it was lost. There is also a descrepancy in the number of photos copied 97 vs 76. And I can no longer find the photos on my hard drive. i did NOT delete the photos. LR seems to have deleted them. This is a HUGE problem. 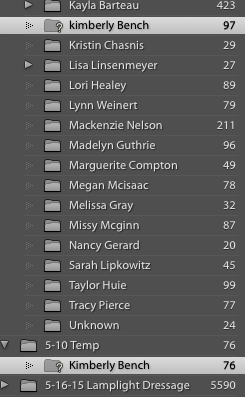 Lightroom CC2015.12/6.12 was released today and should address this issue.  Please update your Lightroom to the latest version and let us know if you continue to see the issue. Thank you for your patience.

Issue of incomplete move of files not resolved yet?

If it is, then you will need to provide very detailed step-by-step instructions for creating this issue again. Based upon the original poster and then John Ellis' additional instructions we were able to reproduce and fix this issue. If you are still experiencing this issue, we need to know very specifically what you are doing when this occurs.  Without that information, I cannot reopen the bug.
Adobe Photography Products

Not that much changed since original poster of the issue Glenn Bristol posted it 6 years ago.

LR is updated this morning. Just to check if it will be able to move.

Also, no screen capture appears in your message.

I've checked the version before posting the message above.
Screen capture is in the second reply to the announcement (above).

Hi Rikk, will the update be of any help if the files are already deleted. I have the same issue as most other users. I moved a folder between two external devices and all the files are gone. 9000 images of my kids. Please help!

Inka, Rikk's traveling at the moment, but I can answer instead. The update aims to prevent it happening in future. You'll need to restore the images from your backups.

Correct, the update is designed for prevention - not recovery.  (And I am back...)
Adobe Photography Products

I am using the current version of Lightroom. Today I moved a file from my laptop hard drive to my external hard drive. LR gave me an error message stating that it could not move one of the file. An entire folder of images (260) is now gone. It is not on either hard drive. This is the second time this has happened. This issue is still not fixed! How do I let Adobe know this is still a problem?

You may have had all of the files in that folder selected and when you did the move. Search your hard drive(s) for one of the file names you moved. They may be there, but in a different location than where you intended to move them. Can you remember any of the file names? Is the one file that could not be moved still showing inside LR?

Couple of days ago I used Lightroom 5.7.1 on my Laptop with Windows 10 and tried to move a folder "2017" (containing over 9300 raw files) from computer's hard drive to the external hard drive. The Lightroom moved 19 pictures only and the rest of the files and the folder itself disappeared entirely from my hard drive and only those 19 files could be found on the external hard drive. The move process took only a minute so it looks like it did not transfer the rest of the files. Please help as it was my entire year of work and family pictures! Thank you!

Do they end up in the Trash Can?
Adobe Photography Products

no. They are just gone.

Prior to deleting the Temp folder, do you verify via the OS that it is empty?
Adobe Photography Products

I just encountered a similar problem. I am really panicking because my files on my backup HDD (that was connected to my PC) ware also deleted.

I used the video instructions from Julianne Kost to transfer my files from my OS HDD to an external HDD. Some of my files transferred some disappeared altogether; they are not in the recycle bin either. In addition, the files on my backup HDD were also eliminated- I did not even touch that one.

I need to talk to someone at Adobe directly. What number should I call?
I use windows 7 and I have LR 5.5.

Both folders are on an external hard drive. I did not verify via the OS that it was empty because I did not delete the folder. I simply moved it's contents to another folder. I used LR to do this because, as you know, if I do that in the OS LR will lose the link to those files and I will have to find them again inside LR. I do not know what other screen shots I can provide.
External HDD. Move from one LR folder to another about 5,000 photos and one of the folders contents disappear it the gist of it.
I have been a software engineer for the last 17 years so I am not a newb when it comes to user interfaces or how directory structures work. I am mystified. And one of my clients is heartbroken.

Thanks for the additional information, John.
Adobe Photography Products

Also, I'm assuming this is not the case, but is the file system on your external drive case sensitive?

No I didn't. I dragged all of the folders from the temp directory to the perm directory. I have no idea how the case changed. I too see no reason why LR would be responsible for changing the case on these directories. Now I am questioning my own sanity...

There are many similar reports in the Lightroom Forum, these are rare but persistent.

I have compiled a list of such reports here

This cost me nearly £300 in obtaining a restore of some extremely important images from a wedding I had shot. I would like someone from Adobe to contact me to discuss how I could be reimbursed for this loss due to the software issues.

I decided i really should start backing up my image files to an external HDD. In preperation of this I tried to move 5 old image folders into one subfolder (Still on my internal HDD).

My images have always been organised as follows when imported by LR:

So I tried to move 5 year folders into one main 'Archive' folder, so like this:

I created the 'Archive folder in Finder, then I thought the best way to complete the move would be within lightroom to retain ties between the catologue and DNG files.

However after moving the folders lightroom flagged up an error message (I can't remember the wording but may have been about duplicate directory naming) and after clicking OK it seems that 4 folders were successfully moved but 90% of my files from 2014 have vanished.

I've paid for and run disk rescue software to find them but none of these files could be found. The only thing i've managed to do is run a script to save the LR previews as .jpg.

I know i should have backed up sometime earlier, but it still stings that i'm trying to do the right thing here and still get screwed by LR deleting my files. What is going on here Adobe?

Ryan, can you go to Help>System Info... and get us your exact LR Version number?

Paige Miller has gathered many other reports of this "rare but persistent and nasty bug":

Hello, i have a problem with a folder vanishing whilst i was using lightroom

Moving folders in Lightroom - lost all my pictures!

Re: The lost photos

Missing 6 months worth of pictures of my kids, HELP!

SAFE TO RENAME/MOVE FOLDERS WITHIN LIGHTROOM?

Since there continue to be reports about this problem over several years, a number of us recommend that if you're moving more than a few files, especially if you're moving folders, do so outside of LR with Mac Finder or Windows File Explorer.  Then reconnect the LR folder with its new location by right-clicking the folder in the Folders panel and selecting Find Missing Folder.

Since there continue to be reports about this problem over several years, a number of us recommend that if you're moving more than a few files, especially if you're moving folders, do so outside of LR with Mac Finder or Windows File Explorer.  Then reconnect the LR folder with its new location by right-clicking the folder in the Folders panel and selecting Find Missing Folder.

I would recommend an even safer method. COPY (not MOVE) the photos to the new hard disk. Then, right-click on the top level folder in Lightroom and select "Update Folder Location" and point to the new copies. Then, once you are sure everything in Lightroom is reconnected and working properly, you can delete the originals. This is all explained in detail in the section entitled "Updating Folder Location" of this document: http://www.computer-darkroom.com/lr2_find_folder/find-folder.htm. This was also Ian Lyons's recommendation (he is the author of this document), and this recommendation is at least 4 years old now.

Nevertheless, how are we going to let users know about this?

Yes, it's difficult to find this solution until you know about the problem...

I have CR2 (Canon RAW) plus JPG files, since I am shooting with both (for various reasons).  I will occasionally see this issue with the CR2 file not being moved.  It seems to happen more if I am using my second monitor for the Loupe view.

My best guess is that the Loupe view window is trying to show the "current" file in the Library, but right as this is happening, the Move operation is trying to move it to the new folder, and there's some conflict between the two operations (which as a software engineer, suggests to me a threading problem in the code).  So far, no lost files, but I do need to retry the Move operation (normally after I remember to turn off the second monitor).

See this topic for a possibly related issue: https://feedback.photoshop.com/photoshop_family/topics/multiple_image_move_operation_bug_since_at_le...

A new report, this is the first one I am aware of where the move was between two folders on the same disk.

Another identical report, files disappear when they are moved inside of Lightroom
https://forums.adobe.com/thread/2193842