Hello,
Talking with the support team, it appears that there is no monthly plan without commitment available for Lightroom.
This is a shame as all the other Adobe applications can be subscribed this way.
Adobe, why don't you make a Monthly without commitment plan available for this application?
By not doing so, you are leaving out all the occasionel users, who won't commit for a year if there only use it for a couple of month every now and then.

Agreed! I'ts a b!tch marketing move to force people to buy the softwear again each year.For people using classic, it's a real shame as cloud functions are limited (and extremely buggy and unreliable). They won't add new sync functions and I don't expect many more inoovative functions for the next versions. I'd be happy to be proven wrong, but until now, the promise of the subscription is not held ;-)

I would be content to have a standalone version that couldn’t be upgraded. I am finding that ever time there is an upgrade the system requirements go up and there is going to be a time when my system will not support it anymore. I would favour a stable system that supports one version of Lightroom rather than having to cope with the bugs of an upgrade.

Bob,  You are not forced to update each time they come out with a new version.  Just turn off the auto update feature and you can stay on which ever version you are currently on.  If you do update and then determine, for whatever reason that you would prefer your prior version, using the Adobe Application Manager or Creative Cloud app, you can go back to your prior version.

The only caveat is that between most (but not all) major releases (ie. LR6 to LR7) they part of the upgrade is to convert the catalog to the a new structure.  In such cases if you go back you'll have to revert to the last catalog version you used with that prior version rather than the one updated for the new version.

For example, I am still running LR8.3.  I decided not to update to 8.4 or 8.4.1 due to the number of problems being reported on those releases and there was nothing of much interest to me between 8.3 and 8.4.  New Camera's, some performance improvement, some bug fixes, etc  were being offered but I don't have a new camera, my performance was fine and I was not hitting any bugs so I didn't feel the need to update.

Indeed, but you’re paying for nothing, then.

But worse of all, now we’re buying each year a new full software, BUT the updates don’t follow. There are only marginal improvements, and I don’t expect many more great updates in the future.

Would you rather wait for a year or two to get All the updates and features in a new single version so it LOOKS like a major update or have it the the way it is now where you get updates and new features throughout  the year and don't have to wait but no single update.  There are a lot of new features released incrementally  between Lr7 and 8 and there have bee a lot of new featured added to Lr8.    If you don't want to keep your hardware/os updated and can't run the new versions then that is a different issue.

I'd rather have the choice of wether or not the proposed update is worth the price. I might be happily skipping some updates I don't find it intresting. There are multiple reasons for this: I might not be intrested in a feature, I might not want to be forced to buy a software, I might not have the hardware to follow, they might have changed their pricing, ...

But the main reason I'm against this way of doing is the way the product evolves or not. By selling new updates, companies are forced to be innovative, wether when there is a subscription, they get the cash anyways, innovations or not. This is sadly how I feel about LR right now: no big improvements nor do they listen to user's requests. With licences, they're forced to listen to users if they want to sell their update.

If I go over previous updates:

8.4:
GPU ipprovment --> this is a bug fix to me, I could live wo it as I didn't notice a big imrovement
color lables --> cosmetic, I can do wo it
batch merge HDR and panos --> nice to have but cosmetic, imho

8.3:
FF correction --> not new, free softs does this (Siril) and vignetting has been there for ages
Texture --> nice but just a combination of sharpness, contrast... again, I could do wo it

8.2:
Enhanced details --> I wont use. If I really need super resolution, I can use dithering or pixel shift
Faster tethering for Nikon --> I don't own a Nikon...

8.1:
Customize the order of Devlop panels --> cosmetic
Add photos photos from a watched forlder --> already existed wo collection
Align in book --> I don't use books

Some updates are nice to have, but I, peronnally, would most probably not have paid for this update and waited for the next one. And something tells me I will be disappointed by the next update, but I hope to be proven wrong.

They could have saved it with the cloud functions but are just giving the finger to classic users: the feature is crippled and bugged. Many very pretinent request on this forum are just ignored. Too bad because those taking time to suggest new features are probably those must involved with LR.

Bu the way, it's not because ther's a perpetual licence there can't be updates and bug fixes. That's how it used to be and pretending the monthly subscription is the only way to go is just not true ;-)

A lot of us would prefer to have the choice, which puts us at odds with the company that feels the need for a reliable enough revenue stream it can plan R&D. No, there's absolutely no guarantee they'll do what we want with that revenue stream, but that's why the competition out there is coming along nicely. That's more a choice than ever before.

What you're talking about is voting with our upgrades on whether or not we like the upgrade. But our personal interests don't take into account their investment in AI — definitely a long-term project. Or services in the Cloud that many don't want, but then again, many do. Or bringing the main programs into better alignment so it's easier to switch between them. And so on. Just bringing old code into the 21st century is a huge project I can only hope they're doing alongside keeping the old stuff functioning in the interim.

Developing anything for this century so everyone might benefit in some way isn't about what we get each version. Just taking into account what we'll stand for getting changed is problematic—look how they failed with the Transform changes for PS. It's all a long-term project, and more and more companies, anyway, seem to have gone for the subscription model to help pay for it. Not so much image editing where the competition is Adobe, hence Adobe's business model, but look elsewhere in graphic software at how much is available by subscription.

The only compromise I can imagine — and feel free to imagine a different one here — is letting us decide we have all that we're going to use, we've chalked up X number of miles on the subscription road, and we get a sliding discount towards taking the last version we rented into a perpetual license, but not otherwise supported, or with only a limited period of support.

Otherwise, I think we have to take the attitude our annual upgrade price with perpetual licenses or our annual subscription—our choice, supports R&D that we don't benefit from today. If it's not supporting R&D as far as we can tell, well, that's when you start looking elsewhere.

I can't disagree with you, obviously ;)

I can totally understand this need. But again, I feel they're not respecting the users by focusing on the wrong topics. Look at LR Mobile: who requested thos tutorials? I don't say they're bad, I say no one asked for it. Now they have a steady revenue they COULD finally fix sync with classic but has decided not to, DESPITE the user paying for. They're not fulfilling their part of the contract, imo.

What you're talking about is voting with our upgrades on whether or not we like the upgrade. But our personal interests don't take into account their investment in AI

I'm not against AI and stuff, but it shouldn't come before core functions and bug fixes. And once implemented, it should be beneficial to the users, not detrimential. Now they're using this to stat it's impossible to sync keywords. It's like saying "We've now this feature, but it's kind of broken so... sorry, we don't give a shit..."

Or services in the Cloud that many don't want, but then again, many do.

I do want cloud services, but it's just not working properly. And it probably won't ever work properly with Classic. Again, we're paying for something half implemented and parked as "won't fix".

If it's not supporting R&D as far as we can tell, well, that's when you start looking elsewhere.

Thankfully it looks they're doing a great job! :)

> Adobe, why don't you make a Monthly without commitment plan available for this application?By not doing so, you are leaving out all the occasionel users, who won't commit for a year if there only use it for a couple of month every now and then. Since I just go for the year, I haven't paid much attention to all the payment options, though some have Annual Plans paid monthly or annually while some offer a monthly plan for a bit more per month. I don't know the answer to why the don't always offer a monthly plan, and I understand why you would want it. It would benefit a lot of users and could bring more in ultimately (though that could go the other way around and cause a lot more people to go off the annual plan), and maybe someday they'll do this. But taking a stab at why they don't now do it? The Photography Plan is very inexpensive since it's 2 major and 2 minor and several free apps combined. It probably costs them more in employee time to be constantly adding and subtracting members, although they may  eventually work out a system like they've done with the single app plans that have a monthly subscription.If they charged  more per month for the benefit of occasional subscribers, the way they do with the single apps, would you be willing to pay it?

Actually there is NO, None, Nada, subscription for LR. LR comes with Photoshop as a package in the Photographers plan.If you like you can subscribe to Photoshop by the month and use Bridge and Adobe Camera RAW. The only thing that is missing is a DAM part.

Well, not really. There is a Lightroom plan with 1TB cloud storage. With yearly plan and monthly or yearly payment.

But its NOT Lightroom Classic 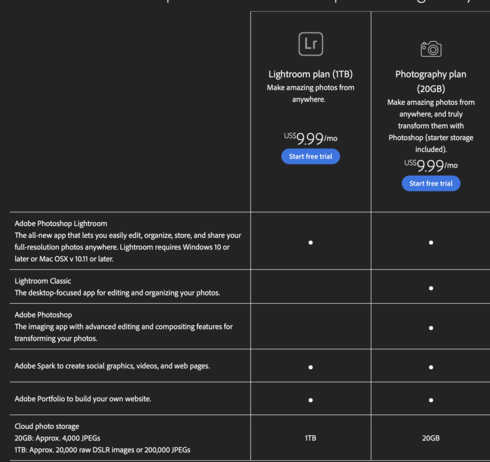 What's dishonest is the price: it's not 9.99/mo but rather 120/y asnyou can't take only a month.
I'd be more than happy to pay now and then when I need LR and cloud storage. The rest of the time, I'm not opening LR or would be happy the have a dummy DAM.

Then Choose a different piece of software. Clearly Adobe products are not for you.

I've been with LR since the beginning, but I'm indeed looking at other solutions. Too bad because I really liked LR and have spent hours posting suggestions and bugs, but they're just treating their customers like shit.