I have several TIFFs in my catalog, which I am converting to JPEGs. After converting an image, it shows up as missing in Lightroom, and I can then point Lightroom at the new file (e.g. image.jpg instead of image.tif). Doing it this way, rather than deleting the tif and importing the new jpg, preserves the develop history, keywords and metadata.

The interesting issue is that Lightroom continues to report the file type as TIFF, both in the Metadata panel (EXIF and IPTC), as well as in filters and smart collections based on file type. This means, for example, that a smart collection to find any remaining TIFFs in the catalog does not work, as it shows the images which have already been converted.

It is not a major issue, but I'd be interested to know if it is possible to fix.

LR is treating the JPEG as a "sidecar" of the TIFF.  You can see that in Metadata panel:

To get LR to recognize the JPEG as a separate file, uncheck the option Preferences > General > Treat JPEG Files Next To Raw Files As Separate Photos.  Then go to the Folders panel on the left side of Library, right-click the folder containing the pic(s), and do Synchronize Folder.   This will explicitly import the JPEG into the catalog.

I think this situation is different to the Raw+Jpeg example. The two files never existed together - it was originally imported as a Tiff, which was later replaced by a Jpeg. 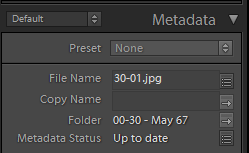 I have just noticed that the EXIF and IPTC panel lists "Original Filename: 30-01.tif". So even though the file is now in the library as a Jpeg, it still remembers that it was originally imported as a Tiff, and presumably it is still basing the file type on that. 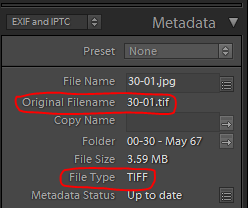 I wonder if there is a way to persuade LR to forget that the file was originally a Tiff, without having to remove and re-import the file (which would lose the edits).

Ah, after seeing the screenshots, I reread your post: "After converting an image, it shows up as missing in Lightroom, and I can then point Lightroom at the new file (e.g. image.jpg instead of image.tif)."

If I understand correctly, you have a TIFF in the catalog.  You convert it to a JPEG but don't import the JPEG into the catalog. You then delete the TIFF from disk, but not from the catalog. Then you click on the exclamation point in the upper-right corner of the TIFF's thumbnail in the catalog and navigate to the JPEG.

When I do that, I get the same inconsistencies you get.  Poking around in the internals, the catalog is confused -- the catalog database thinks the internal file format is TIFF, while Develop and perhaps other parts of LR use the file's extension to determine the type as JPEG.

I'm pretty sure the developers didn't intend for you to be able to change the file type in the way you are doing.  I think it's a bug that LR lets you do that.

The standard way to convert a raw or TIFF to JPEG is to do File > Export, selecting the options Export To: Same Folder As Original Photo, Add To This Catalog, Include: All Metadata, and Write Keywords As Lightroom Hierarchy. Then you optionally delete the original. This will preserve in the JPEG any metadata changes you've made (e.g. to caption or keywords), it will capture the edits you made to the TIFF, but it won't preserve the develop history, unfortunately.

"I wonder if there is a way to persuade LR to forget that the file was originally a Tiff, without having to remove and re-import the file (which would lose the edits)."

Select the file and do Metadata > Save Metadata To File. This will save your edits and metadata changes back into the JPEG. Now type Delete and click Remove -- this will remove the file from the catalog without deleting it from disk. Finally, reimport the file back into LR -- it will come in as a JPEG this time, with all your metadata and previous edits (that were made to the JPEG).

The steps you describe work well so that is what I am now using. Losing the develop history is a shame, especially as it loses the ability to do a before/after comparison. But that can be worked around (e.g. copy all settings; reset all settings; Copy History Step Settings to Before; paste all settings).

Thank you very much for your help!

I have the same issue.

I normally use DNG files, but my assistant apply develop settings to raw files and after that we delete Raw files, check that was the base files to edit our files.

Now we need to apply some changes in develop files, but to change I need to doit manual change one by one file to a wedding of +1500 files.

In finder rename all .DNG files to .NEF and indicate new location in Lightroom and work fine. To now that these files are DNG and not NEF rename into Lightroom like: filename-DNG.NEF to identify.

Maybe this case can help to somebody. LR is to strict to change source editing files and doesn't permit batch change in file types or extension or location.