LR doesn't ignore the case of folder names and can mistakenly import the same photo more than once. This was originally tested on LR 3.4 / Windows 7, but many reports over the years show the problem occurring on later versions of LR and both Mac and Windows.

1. Start with a new catalog.

3. Use File > Import to Add the photo to the catalog.

A similar problem occurred with the LR 3.0 SDK methods for importing files (haven't tested again with later versions):http://forums.adobe.com/message/3134354There have been reports from other users of LR 3 not ignoring the case of pathnames, but with the broken forum search, I can't find any of them.Note that Windows network shares can sometimes report UNC pathnames in different case, depending on how the share is accessed (drag-and-drop from Windows Explorer, using Windows APIs to browse the file system, or using a Windows API to get the path of an assigned drive letter), e.g. \\MyShare\... versus \\MYSHARE\...

fran, stop a minute. Don't do anything else - post it on www.lightroomforums.net or http://forums.adobe.com/community/lig... and we'll help you get it sorted out.

Don't worry, we just need to figure out what you're doing or what's going wrong. That's more easily done in a proper forum environment than a feature request though.

Adobe haven't announced that yet, but 3.4's only just been released and it's usually around 3-4 months on average.

I've been aware of this problem for a long time - as Lightroom user, and plugin developer, so I haven't been bitten in a long time. Still, this seems like one of those problems that should be on the "fix next rev" list. I assume its just a matter of changing the SQL queries that deal with folders to be case insensitive - but now I'm out on a limb again...

In the mean time, google's advanced search can be used to confine search to Lr forum - if you can figure out how to do it...

Here's a related thread where the last poster reported duplicate network shares on Windows that may be due to the bug:

I currently have all my photos and an external drive I call "Susie". They are separated into folders by subject and then 2 levels of sub-folders by date and location name. Now, however, when I import any new photos, it places them into a duplicate phantom "Susie" drive in the library menu, instead of the original "Susie" drive. I have plenty of drive space left on my "Susie" drive and the latest photos appear in their proper folders there. My question is, why is Lightroom creating a duplicate drive name (which shows green like the original) and placing all new photos there instead of where they should be?

This reply was created from a merged topic originally titled LR imports into a "shadow" copy of the folder.

I have a folder structure with a top level folder of "Photos". Under that I have sub-folders, and often a third level. Second level folder is year, so 2016, 2015 etc. I started having a problem with LR5 and it's persisting with LR6. I import into my 2016 folder but LR creates a structure that looks like this;

This has been driving me nuts for a while. Is this a known problem? Is there a fix?

If I drag the two photos from the shadow 2016 folder to the real 2016 folder, LR says it can't because they are already there. With a lot of messing around I can get new photos in the correct location. The folders were created with LR.

If I have a lot of photos I sometimes import into a folder outside of this structure and only drag them into "2016" as I process them. If I do that the same thing happens, a phantom 2016 folder appears, in LR only, under the root.

This problem was caused by LR not ignoring case of filenames.  See the original topic thread for how the problem was solved: https://feedback.photoshop.com/photoshop_family/topics/lr-imports-into-a-shadow-copy-of-the-folder

Is anyone able to please help, as I've been trying to follow the fix instructions on this thread as I have virtually an identical issue ('capitalisation bug') after also switching to a new macbook https://feedback.photoshop.com/photoshop_family/topics/lr-imports-into-a-shadow-copy-of-the-folder However the minor differences mean I have a few issues & queries but can't reply to Jim Wilde on it because the thread has been closed for comments and merged with this one.

I store all my photos on an external Synology NAS device and they go in what the NAS calls a 'shared folder' (a bit of a misnomer in this context as acts more like a drive) called 'Photo' (this simply cannot be renamed on the NAS without significant issues). This 'shared folder' is what I need to mount on to access my photos that are in a folder called 'Lee's Lightroom Photos'. Please see this screenshot showing how this mounted item appears in Finder. 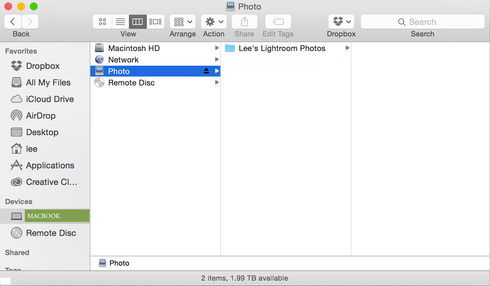 My issue is I now have two seemingly identical drives called 'Photo' showing in the left hand panel in Lightroom (see screenshot below) under 'Folders', which both have the 'Lee's Lightroom Photos' folder within them. if you could see the panel in full would show three top level drives i.e. Macintosh HD, Photo and Photo under 'Folders' (Note the internal error message appears after I try to 'show the parent folder' by right clicking on the white highlighted 'Lee's Lightroom Photos' folder below the top 'Photo' drive.) 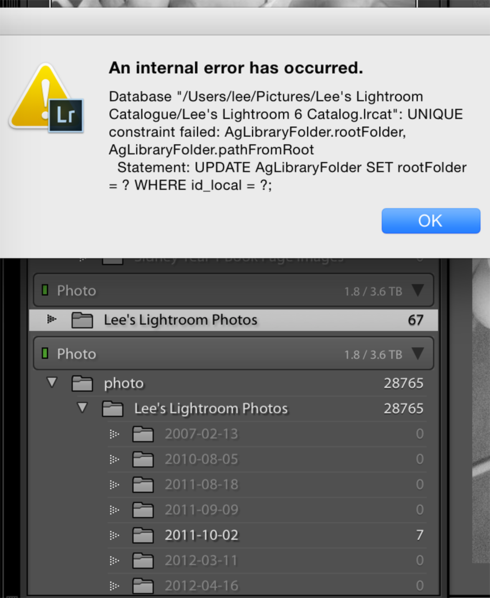 The top replica 'Photo' drive appeared after I moved to the new Mac and first edited one of my existing .dng Lightroom images in Photoshop and saved it as e.g. a tif file i.e. it also got placed in a new replica 'Lee's Lightroom Photos' folder in an appropriate dated folder. These edited images do not then appear in Lightroom under the second 'Photo' item on the screenshot in a dated folder within that particular 'Lee's Lightroom Photos' folder next to original unedited image (if I check in Finder though both images are together in the right dated folder). However that second 'Photo' drive is the one that first had all my lightroom photos beneath it when I moved to the new Mac, and when I import photos to Lightroom now they all still go under that second 'Photo' within 'Lee's Lightroom Photo's' in their appropriate dated folder (you'll also see there are circa 28000 photos beneath that wrong 'photo' folder versus just 67).

At this point I should point out the second 'Lee's Lightroom Photos' folder (on the screenshot) seemingly has a 'Parent Folder' called 'photo'. This 'photo' folder does not appear within Finder and it has a lower case start rather than uppercase as per the 'drive' level 'Photo' which does appear in Finder (shown previously above). However if you see the screenshot below you'll notice that when I hover over one of the folders under that second 'Photo' drive the path shows the lowercase 'photo' which does NOT appear in Finder. Hence my view that this must be the 'capitalisation bug' mentioned in other threads. 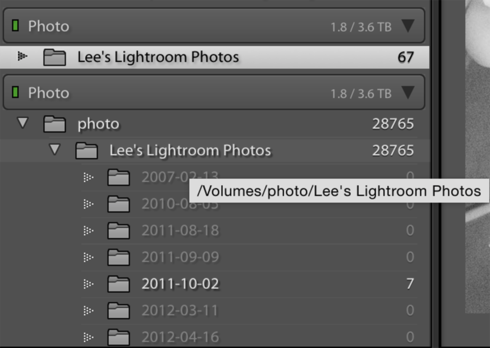 Is anyone able to tell me how I fix this issue, because the other threads that address similar problems do not seem to have duplicate 'drives' (they have duplicate sub-level folders) and I am not sure under which of the two drives shown on Lightroom to create the 'root' level 'dummy folder' or even exactly where 'the root level' is in this scenario. I'm also not sure which is the 'correct' folder to select for 'update folder location' as 'photo' is wrong given the case but there is also not a correct 'Photo' folder I can pick in Lightroom, since 'Photo' is showing as a drive.

I hope this all makes sense. Any steps to follow would really be appreciated. I have already done a catalog back up and backed up my NAS.

This reply was created from a merged topic originally titled importing creating a new (phantom)folder.

I am seeing some strange behavior on importing images, either from RAW on a camera card or JPEG on a thumb drive.
My work has always been to create a folder in the Folder panel of the Library Module of Lightroom. Then import and set thew destination to the newly created folder in the import panel.

As of 3 days ago this importing has some strange behavior. Now I should mention that my Catalog and Library are in the default Picture folder of the boot drive. (2TB SSD)
What I see:
1) The destination folder shows 0 after the import
2) A new phantom folder is created with the images inside.
3) The path for the folder is identical to what I had created prior to the import except the new folder is outside of the picture folder, in fact it shows even when the user folder is closed.
4) If I right click on a newly imported image and select show in finder, it shows it in the destination folder I had selected, not the phantom folder.???
5) If I try to drag the images into the destination folder I get a pop up window saying they can't be moved because they already exist. ???

I have made a screen movie of this behavior, it should be below.

See the replies from the original topic: https://feedback.photoshop.com/photoshop_family/topics/importing-creating-a-new-phantom-folder . Both TJ Cadwalader (Mac) and Jeff (Windows) have been struck by this bug.

The core bug is that LR assumes file names are case-sensitive, whereas most of the Mac and Windows volumes used to  store photos are case-insensitive.  Sometimes the operating systems use different case when reporting a file name to LR, e.g. "e:\pics" and "E:\Pics" -- both are valid file names referring to the exact same file (if it's on a case-insensitive volume).  It is solely a LR bug that it doesn't recognize these as the same file name.﻿

I feel as though I have done “something “ to trigger this after years of not seeing it.
Not sure.how I am going to fix this and also how to prevent a reoccurrence.
It appears that creating folders with finder might be an option to prevent this, but that’s a work around, not solving the root cause.

Very possibly related to what you wrote in the unmerged topic: "Prior to 2 weeks ago my SSD WAS case sensitive. Updating my SSD machine to the new operating system, reformatted my drive to APFS which by default is NOT case sensitive."

In my case the issue goes all the way back to the users name.  The Lightroom tree is Users/Toms/Pictures.  The Phantom folder tree has it Users/toms/Pictures.  The phantom folder is correct according to my OS info.  So some where along the way my users name got changed.
I have Time machine backups that I can restore from and catalog back ups as well.
If I drop back in time to a point just after updating to classic I may get to a point where the path is still correct.  I think,  but I won't know for sure until I restore.  I would loose a few edits but the 800 or so imports could easily be re-imported.  The I could watch closely to see what triggers this behavior. 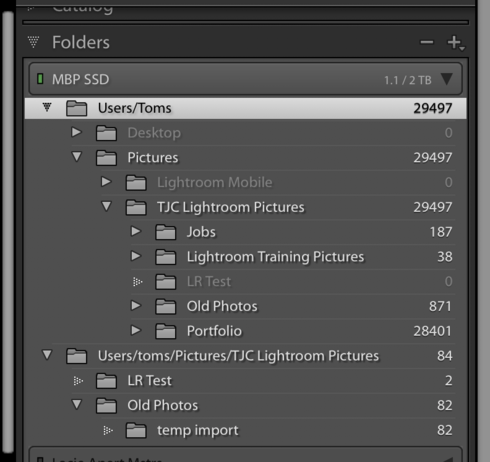 Tom, I'm just catching up with the forum after being away. Have you fixed this now, or do you need instructions on how to do it without losing anything?

No worries, Victoria. We fixed it for him over at LRF. It was an interesting one, as we had both the "volumes" problem AND the "capitalisation" problem at the same time. All sorted now though.

Maybe the rest of us could benefit from a real fix?

Yes all is well (at least until it happens again). Thanks for checking up. I was in good hands with Jim Johan.