LIGHTROOM Develop mode doesn't recognize the Sony E 24mm F1.8 in "auto" mode. I always have to set it manually.

The workaround is to load a brand new raw image taken with this lens, choose the right lens and notice that Setup switched from Auto to Custom. With the correct lens specified, click on Setup and choose Save New Lens Profile Defaults. Now set the Setup to Default and click Alt then choose Set Default... down below and choose Update to Current Settings.

This will set the Default instead of Auto as the default lens profile Setup mode.

It is important to have a new image and only have changed the lens profile Setup to Default before saving the new LR defaults.

Actually I don't want a workaround, I want a fix. Unfortunately it's quite hard to report bugs to adobe, you always end up in one or another web forum.

I do use several lenses and I don't want to move away from auto for that very reason. It's just one lens that isn't recognized correctly.

So maybe you know where the offical bug reporting form hides? ;-)

The official standards for recording lens information in the metadata are only just starting to come into effect, and therefore it isn’t always clear which lens was used. Lightroom uses all of the information available to make an educated guess, but if it’s not sure it leaves you to select the profile. Once you’ve chosen the lens, you can set that as a default for that camera/lens combination using Save New Lens Profile Default so you don’t have to select it on every photo in future. That's why that option was put there.

The Default setting in that pop-up does the same as Auto, but it allows you to override the settings for specific lenses, so it's the best choice most of the time.

(Oh, and this is the official bug reporting place)

I would be worth providing a link to a raw file that doesn't work, so Adobe can look at it.

Upload to http://www.dropbox.com/ and post a public download/share link to it.

I tested images we shot with the Sony E 24mm F1.8 and profile auto-select worked in LR 5.6.

Please post a sample as Steve suggests and I'll take a look.

Sorry Chris but I've got to ask this. Are all reports ending up like this? I really wished Adobe would have kept a simple bug report form so that useful conversation can happen in private.

A public place to post bugs allow for other users to vet the bugs, as in this case, where it's not a bug, and allows other users who think they might have a bug to see if someone has already posted about it and avoid duplication.

According to the Camera Raw plug-in for Photoshop, there is a built-in lens profile for this lens--which would also be built-in in LR, so it would make sense that it wouldn't also correct with a selectable profile: 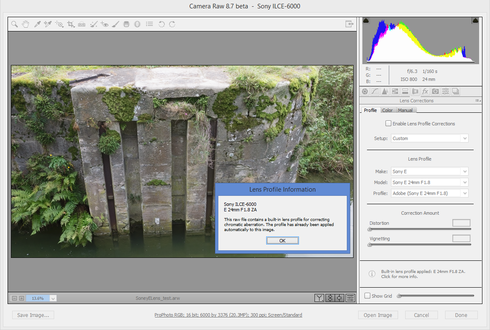 Assuming this didn't just change with the ACR 8.7 Release Candidate for Photoshop, my analysis is that everything is ok and it is normal that a selectable lens profile doesn't get used when Auto is selected, and if you manually select a profile then you're getting double correction.

I hope LR gets a UI update to show that built-in profiles are being used.

Odd, will double check with Ps+CR... Indeed, this is how it looks for me: http://i.imgur.com/BMwAVCj.png . So I didn't had the popup and the lens correction dialog shows "auto" but doesn't select the lens. However, it doesn't really seem to apply the profile because once I select the lens manually (custom mode), the RAW suddenly gets corrected....

@Steve: So as a workaround, I did as you said. Used "Save New Lens Profile Defaults".

This is how mirrorless cameras work, nowadays, there is a built-in profile that duplicates what the camera is doing for its own JPGs.

The Sony E 24mm f/1.8 selectable profile is for cameras that don't have this built-in correction, usually older cameras.

Mine looks the same except in English.

There is a built-in profile being applied in both ACR and LR so you should NOT be selecting a profile, yourself, manually.

This is getting ridiculous, really. Trying to get some forum points? Sorry, I coulnd't resist. I am well aware of that stuff, believe me. I just told you that I utilized the workaround you proposed. I didn't say I was using that before posting this bug report. This is not a beginners forum. I reported a bug. As a Senior Software Developer, I care for a real fix provided by a developer. I don't care for a workaround provided by a mere user. I guess Chriss got his test case and now needs some time get it fixed. So thanks and don't further dilute this conversation.

There is no bug. My workaround was for if there was and that wasn't obvious until you posted your raw file.

Lightroom is operating as intended by not selecting a profile when you choose Auto.

There is a built-in profile being used.

I'm not sure what else to say.

You can do whatever you want, obviously, but with my workaround in effect, you are double-correcting the geometric distortion.

If you click on the message in ACR, it says "this raw file contains a built in profile for chromatic aberration" (but not for distortion).

So Steve is correct that a built in profile is being applied, however the separate profile is required for any distortion correction.

So then the question is, does the camera, itself, correct geometric distortion or not? If not and Adobe is attempting to replicate the camera's lens corrections then maybe everything is still operating as intended and it is up to the user to correct additional distortion by selecting their own lens profile default.

Lightroom ships with a distortion profile for it, so without seeing an in-camera JPEG, I would assume that this camera does NOT correct geometric distortion and everything's operating as intended, apart from Lightroom not selecting that profile when you check Enable Profile Corrections.

Guys, you're testing my patience here. It doesn't bring me nor you nor this report any benefit if you go wild on assumptions. I was very clear in my bug report and it seems like the developer (the only persons that matters here) got it right.

I could upload a JPEG just to prove my point, but it's enough that I catched a developers attention. Can't believe I really replied again....

Apologies for testing your patience, but you don't have to continue reading, let alone replying. Steve and I are having a conversation on this public forum about this topic, but we're not pestering you about it.

It's always good to learn additional details about the behavior of specific cameras, and it'll benefit others searching for the information in future.

Thank you for clarifying the in-camera behavior.

Can you post a raw file from one of the lenses that does work how you expect in LR?

In this specific case of this one lens, it would appear that we don't have clashing corrections, because only CA is begin corrected by the profile and presumably geometric and vignetting corrections could come from a separate profile and the application of both profiles sequencing of the two would be ok.

It would be interesting to know what built-in corrections are occurring, if any, for the lenses that do have selectable corrections automatically being applied.

After looking at the sample image, there may be a bug in the original profile. I'm sorting it out now and will follow up when I know more.

Bug is fixed and will be available in the final ACR 8.7 and accompanying Lightroom releases.